xxxxxAlthough the Danes failed to retake England in 1066 (W1) following their defeat at the Battle of Stamford Bridge, Denmark remained the most powerful of the Scandinavian countries. Despite their defeat at the hands of the Hanseatic League in 1368, the Danes held a large area of land alongside the Baltic Sea, and in 1380 their king, Olaf II, took over Norway as Olaf IV, together with Iceland and the Faeroe Islands. Then in 1387, following the death of Olaf, his mother Margaret I seized both crowns and, two years later, took over the Swedish throne as well! The Union of Kalmar followed in 1397, officially uniting the three Scandinavian countries under one king, her grand-nephew Erik of Pomerania. But the union was not destined to last. As we shall see, following a Danish invasion of Sweden and a three-year revolt by the Swedish leader Gustavus Vasa, Sweden regained its independence by the Treaty of Malmo in 1524 (H8). Norway on the other hand, was taken over by Sweden by the Treaty of Kiel in January 1814 (G3c) and did not gain complete independence until 1905. 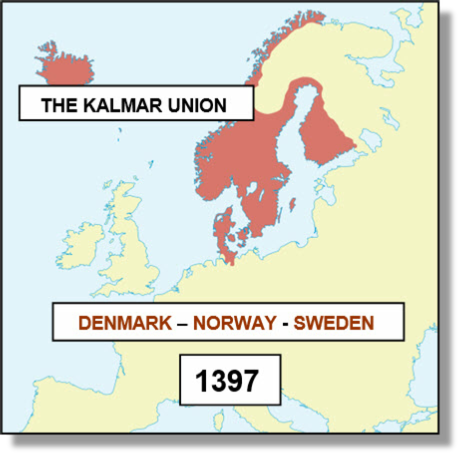 xxxxxAs we have seen, at the Battle of Stamford Bridge in 1066 (W1) the invading Danes failed in their bid to retake England. Nonetheless Denmark remained an important nation and the most successful and powerful of the three Scandinavian countries. Indeed in the late twelfth and early thirteenth centuries the Danes carved out for themselves a sizeable piece of real estate along the northern and southern coastal areas of the Baltic Sea and developed into a wealthy trading nation - at least until 1368, when the growing influence of the Hanseatic League forced them into a war they failed to win.

xxxxxInx1380 their king, Olaf II, took over the Norwegian throne as Olaf IV and, with it, the rule of Iceland and the Faeroe Islands. For many years Norway had been beset with internal problems and wars of succession, and whilst there had been able monarchs, notably Sverre and Hakon IV, there was no inner strength to sustain the nation. Indeed, from 1319, some sixty years before the merger with Denmark, Norway had been governed by the Swedish monarchy. 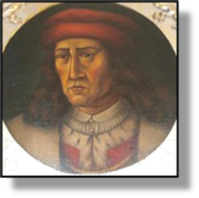 xxxxxThen in 1387, following the death of Olaf, King of Denmark and Norway, his mother, Margaret I, seized both crowns and, two years later, when the Swedish nobles forced their king to abdicate, took over the throne of Sweden. She now sought to establish a closer, political union between the three countries and this she achieved in 1397 with the Union of Kalmar. Forxthe first time the Scandinavian countries were joined under one king, Margaret’s grand-nephew, Erik of Pomerania (c1381-1459) (illustrated).

xxxxxThis union survived for more than a century, but there was constant conflict between the Danes and the Swedes and, as we shall see, this eventually culminated in a Swedish rebellion under Gustav Vasa and a successful bid for independence, achieved by the Treaty of Malmo in 1524 (H8). As for Norway, this country was seized by Sweden during the Napoleonic Wars, confirmed by the Treaty of Kiel in 1814 (G3c), and did not gain full independence until 1905.