xxxxxAs we have seen, the Babylonian Captivity, which began in 1309 (E2) when Pope Clement V removed the papal court to Avignon, came to an end in 1377 when Gregory IX returned to Rome. However, when he died the following year and an Italian pope was elected, the French cardinals rejected the appointment and elected their own pope. In 1378 he quickly took up residence at Avignon and the Great Schism had begun. As we shall see, this bitter and damaging division was not ended until the Council of Constance in 1417 (H5) and, at one time was compounded by the election of a third pope at Pisa in 1409 (H4). Needless to say, such a situation brought the Catholic Church into serious disrepute, and strengthened the power of secular rulers in religious matters. 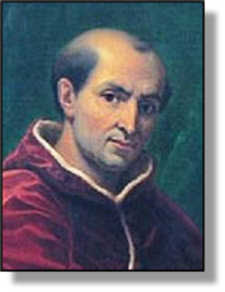 xxxxxWe have seen how and why Pope Clement V (illustrated) removed the papal court to Avignon in southern France in 1309 (E2) during the reign of Edward II. Here, during what came to be known as the Babylonian Captivity, it came very much under the influence of the French monarchy and, despite making some progress in matters of administration and missionary work, it lost a great deal of its prestige and authority. In 1377, in the last year of Edward III's reign, Gregory XI moved the papacy back to Rome.

xxxxxThe immediate result of this return was quite the opposite of what had been envisaged. When Gregory died the following year and the Italian Urban VI was elected in his place, this appointment proved totally unacceptable to the large number of French cardinals. They had become a very powerful body during the “captivity”, and had naturally wished to keep the papal court in France. Later that year, 1378, they retired to Anagni and elected one of their own as pope Clement VII. He lost no time in taking up residence at Avignon and the Great Schism had begun. This disastrous division was not ended until an agreement in 1417. In the meantime it did great damage to the standing of the papacy, and much greater harm, ironically, than the Babylonian Captivity had done in the preceding seventy years. 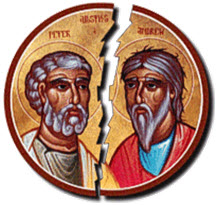 xxxxxFor close on forty years Europe was now to witness the undignified spectacle of pope fighting against pope. Each excommunicated the other, along with all their followers, and this brought about divisions between kingdoms, religious orders and even parishes. The “one, holy, catholic and apostolic church” as proclaimed in the Nicene Creed, was seen as a farce, and the validity of the sacraments was obviously put into question. And there was a wider, political implication. National leaders now felt that their rights in church matters were greatly strengthened and, indeed, justified.

xxxxxAs we shall see, confusion was the more confounded when, in 1409 (H4) the Council of Pisa elected a third pope! Unity was not finally achieved until the Council of Constance in November 1417 (H5).