xxxxxAs we have seen, in 1345 (E3) the Ottoman leader Orhan had gained a foothold on the peninsula of Gallipoli, and by 1377 his successor, Sultan Murad I, had advanced deep into the Balkans and forced the Byzantine Empire to pay tribute. He resumed his campaign three years later and, in 1389 his son, Bayezid I, completed the conquest of the Balkans by defeating the Serbs at the Battle of Kosovo. He then moved into Hungary, and at the battle of Nicopolis in 1396 defeated a force of crusaders which had been hurriedly assembled to try to stop his advance. In the meantime he laid siege to Constantinople, aiming to starve the city into submission. But the speed of Bayezid’s advance alarmed the Mongol leader Tamerlane. He abandoned further designs on India and, as we shall see, in 1402 (H4) took on the Ottoman Turks.

xxxxxAs we have seen, in 1345 (E3) the Ottoman leader Orhan had gained a foothold on the peninsula of Gallipoli. By the end of the reign of Edward III, his successor, Sultan Murad I, by a series of victories - notably those achieved at Chernomen and Samakow - had carried the Turkish offensive into Europe, and established his authority deep into the Balkans. Bulgaria, northern Serbia and the Byzantine Empire were obliged to accept Turkish domination, paying tribute and providing military assistance. 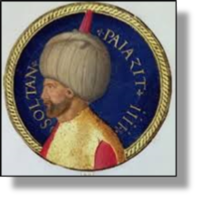 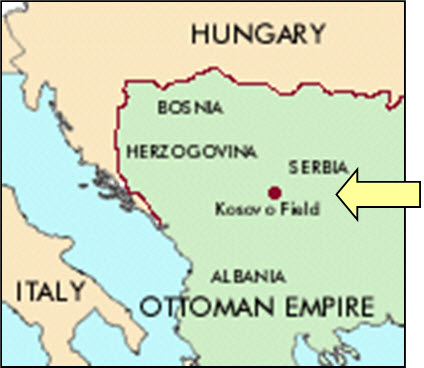 xxxxxIn 1380 Murad resumed his offensive. He extended Ottoman power into eastern Anatolia, and then his son, Bayezid I (illustrated) completed the Turkish hold on the Balkans by a decisive victory over the Serbs at the Battle of Kosovo in 1389. At first, victory was in the balance. A Serbian nobleman, pretending to defect to the enemy, found his way to Murad’s tent and killed him with a poisoned dagger. Confusion reigned for a while, but then his son took control of the battle and, surrounding the Serbian army, dealt it a crushing and decisive blow.

xxxxxBayezid, nicknamed “lightning”, continued his father’s campaign in Anatolia and in 1395 invaded Hungary. Deeply concerned at this advance into eastern Europe, an army of European crusaders was hurriedly assembled, but Bayezid met the force at Nicopolis in September 1396 and the crusade was crushed. For some ten years, too, he blockaded Constantinople, aiming to starve the city into submission. He might well have achieved this aim and completely overthrown the Byzantine Empire at this stage had it not been for the Mongol leader Tamerlane. Bayezid’s “lightning” advance, especially in Anatolia, had given the Mongol leader cause for alarm. In order to secure his western flank he abandoned further designs on India and, as we shall see, in 1402 (H4) turned his attention onto the Ottoman Turks ... and he was not a man to lose a fight. 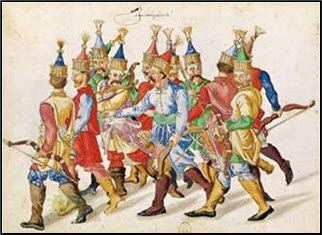 xxxxxIncidentally, it was Murad I who originated the Janissary Corps, an elite fighting force which gained a well-earned reputation for its courage and military prowess. When first established, the corps was made up of young Christians from the Balkan provinces who, having been converted to Islam, were drafted into the Ottoman army. The Janissaries later became a force in politics and court intrigue, but they met a sudden demise in 1826 in what has come to be known as the “Auspicious Incident”. In June of that year they revolted against their Sultan, being opposed to changes in the armed forces. When they refused to surrender, he destroyed their barracks with cannon fire. Those who were not killed in the bombardment were captured and executed.