xxxxxAs we have seen, by 1376 (E3) the English theologian John Wycliffe had become widely popular for his attacks on the abuses and privileges of the higher clergy. The Great Schism, beginning in 1378, gave a boost to his arguments. In his On the Office of Kingship he even saw the Pope as anti-Christ, and argued that the king should be the head of the Church. In 1381 he went so far as to attack the spiritual powers of the clergy themselves, though for many Christians, including John of Gaunt his one-time protector, this was a step too far. In the meantime, under his guidance, the first full translation of the Bible in English was completed in 1382. In circulation by 1388, it later influenced William Tyndal's translation in 1525. And to spread the Word further, he organised a band of travelling priests - known as Lollards - to campaign for church and social reform. As we shall see (1401 H4), these priests made some headway, whilst Wycliffe’s teaching influenced the thinking of John Huss, leader of the Bohemian movement for church reform. 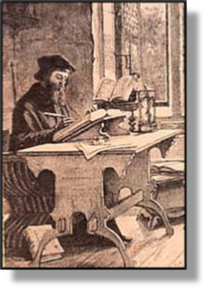 xxxxxAs we have seen, by 1376 (E3) the English theologian John Wycliffe had become popular in the eyes of many because of his open opposition to the abuses and the privileges of the higher clergy, and to the interference of the pope in matters of state. His major work, On Civil Lordship, went so far as to argue that unrighteous clergy - and that could apply, in fact, to any who were not following a life of evangelical poverty - should be removed from their living by the state. He was condemned by the church authorities, but no action was taken against him.

xxxxxThe beginning of the Great Schism in 1378 gave Wycliffe’s arguments an enormous boost. His views now became more extreme and decidedly heretical. For a start, he stepped up his campaign against the papacy. In his On the Office of Kingship he virtually claimed that the Pope was anti-Christ, and that the king should be regarded as the head of the state Church.

xxxxxIn 1381 he went further, and began to attack the spiritual powers of the clergy themselves. In a series of blistering treatises, he denied transubstantiation, i.e. the miracle performed by the priest in changing bread and wine into the body and blood of Christ. Nor, he argued, did a priest have any right to forgive sins. Here, Wycliffe’s views were not so well received. These priestly powers were, in fact, the very foundation upon which the authority of the clergy was based. Cries were heard against such extreme views. He was expelled from Oxford and lost the support of many, including John of Gaunt, his friend and one-time protector. 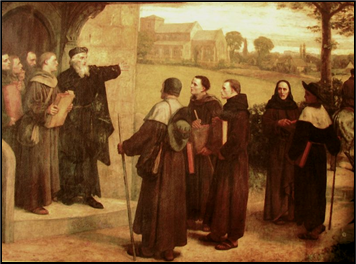 xxxxxIt was at this time, too, that Wycliffe began to widen the impact of his message. Under his guidance, two of his disciples, Nicholas of Hereford and then later John Purvey, began what was to be the first ever completed translation of the Bible in English. Finished in 1382 and in circulation by about 1388, it was to bring the scriptures to a much wider circle of people, and it also influenced William Tyndale in his own translation in 1525. And to take the Word to an even wider audience, Wycliffe began to instruct priests in his beliefs and then send them out to preach throughout the country. These travelling preachers - who came to be known as the Lollards - began to stir up a great deal of discontent by their demands for Church and social reform. 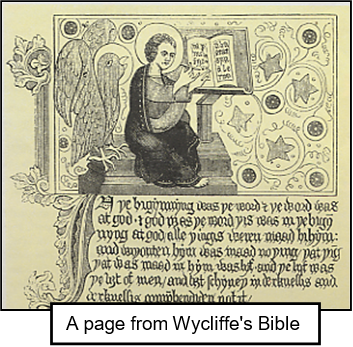 xxxxxDespite his loss of favour at court and his condemnation by the Archbishop of Canterbury, Wycliffe produced some of his most important works in the last years of his life. His Trialogus, in particular, provided a consummate summing-up of his theological and philosophical ideas. He died of a stroke in December 1384, and was buried at Lutterworth, but in 1415, by order of the Council of Constance, (the one which brought an end to the Great Schism), his bones were dug up, burned, and the ashes cast into the River Swift that flows through Lutterworth. This belated action by the Church was, in fact, an admission of the depth of the impact Wycliffe had made in voicing the concerns felt by many over the conduct of the pope and his church.

xxxxxAs we shall see (1401 H4), Wycliffe’s followers, the Lollards, made some headway in England, severely persecuted though they were, whilst his ideas had a marked influence on the thinking of the Bohemian church reformer John Huss, - and thus the important part that he played in the protest which led to the Reformation.

xxxxxWycliffe's mistrust of the clergy had been illustrated only too clearly in 1371 when Edward III's chancellor, William of Wykeham (1324-1404), former Bishop of Winchester, was found guilty of corruption by John of Gaunt. He eventually received the royal pardon from Richard II and recovered his post. Today he is remembered for his founding of New College, Oxford in 1380, and Winchester College two years later. The method of management employed at Winchester served as a pattern for other self-governing schools in the land, including Eton College. As a consequence, he is sometimes called the father of the English public school system. 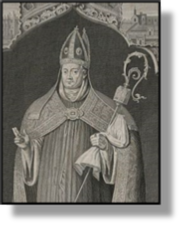 xxxxxWycliffe’s mistrust of the clergy, particularly those in high places, had been illustrated only too clearly in 1371 when Edward III's chancellor, William of Wykeham (1324-1404)) lost his post, and was later charged with corruption during a series of anti-clerical attacks led by John of Gaunt. William, who had worked his way up to high office from humble beginnings, and had become chancellor and bishop of Winchester under Edward III, later recovered his position. He received the royal pardon from Richard II and became his chancellor from 1389 to 1391. 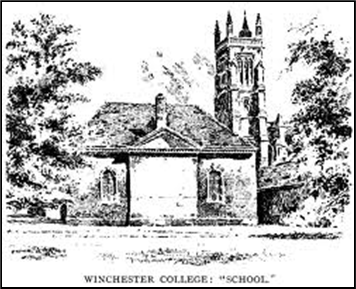 xxxxxToday, William is best remembered for financing the building of New College, Oxford, in 1380, and then, two years later, founding a school at Winchester - later to become Winchester College - to prepare seventy boys for further study at Oxford. Established as a self-governing and sovereign body, this method of management served as a pattern for other English public schools, including Eton College, founded by Henry VI in 1440. He has been called the father of the English public school system - rather ironic for one born of such a humble family. His motto - and that of Winchester School today - was Manners makyth man.