xxxxxIn May 1358 a large peasant revolt broke out near Compiègne, north-east of Paris. Known as the Jacquerie Uprising (because the French farm labourer was often nicknamed Jacques), it was a protest against heavy taxation and the devastation caused by the ravages of war. It quickly spread and led to an outbreak of violence in Paris itself. In June, however, both uprisings were ruthlessly crushed by royalist forces. Some 10,000 of the insurgents were killed, and possibly double that number of peasants were slaughtered by way of reprisals. 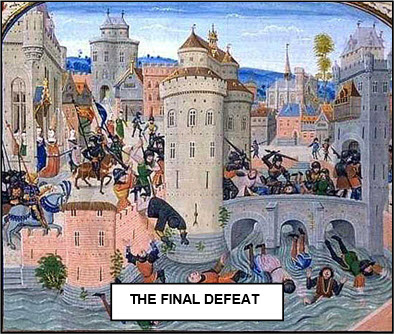 xxxxIn May 1358, taking advantage of the upheaval which followed the defeat of the French army at Poitiers, a large mob of peasants, led by Guillaume Cale, went on the rampage near Compiègne, north-east of Paris. The insurrection arose from the extreme suffering caused by the extensive pillaging of the countryside by English forces and their mercenaries, and exacerbated by the heavy taxes imposed on them by their own nobility. It quickly spread across the region, destroying many castles and killing their occupants. In this action they were joined by another rebel group from Paris, led by the revolutionary Étienne Marcel.

xxxxxThe following month, however, both groups were defeated by royalist forces, and the insurgents, some 10,000 or more, were slaughtered. There then followed savage reprisals against the local peasantry. Some reports suggest that over 20,000 were killed in two weeks.

xxxxxIncidentally, the word Jacquerie derives from the nickname for a French peasant: Jacques Bonhomme. The name was a contemptuous term used by the privileged classes when referring to those who worked on the land. The uprising itself was graphically described in Froissart’s Chronicles, (1322-1400), together with the illustration shown above. And it was also the subject of a work written in 1826 by the French dramatist Prosper Mérimée. Entitled La Jacquerie, it was made up of thirty-six dramatic scenes.