xxxxxAs we have seen, during the reign of Edward II there had been a long and bitter dispute between Louis IV of Bohemia and Pope John XII over the papacy’s right to approve his title as the King of Germany. After the death of Pope John in 1334, his successor, Clement VI, continued to claim this right and, in response, Louis called upon the support of seven Electors (church and lay princes in Germany). In 1338, by the Declaration of Rhens, they decreed that the pope had no rights in the matter. Five years later, however, Clement offered the German crown to Charles of Bohemia, and a war of succession was only avoided by Louis’ sudden death. Charles was crowned Holy Roman Emperor in 1355 but, by the Golden Bull, drawn up the following year, the election of the German ruler was placed totally in the hands of the Electors. The pope’s right to approve such an election was dismissed out of hand. 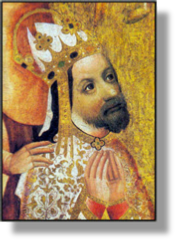 xxxxxAs we have seen, during the reign of Edward II there had been a long-running battle between King Louis IV of Bohemia and Pope John XXII over the pope’s claim that he could not be legally recognised as King of Germany unless his right to the crown was confirmed by the papacy. In response, Louis invaded Italy in 1327, had himself crowned emperor by lay officials in Rome, and elected his own pope, a Spiritual Franciscan named Nicholas V (though he abdicated in 1330). When Pope John died in 1334 this bitter quarrel had not been resolved, and his successor, Clement VI, was not prepared to let the matter drop.

xxxxxTo meet this new challenge, Louis called upon the support of the Electors - seven ecclesiastical and lay princes of the Holy Roman Empire who, by ancient custom, had the right to elect the German king. In 1338, six electors responded and by the Declaration of Rhens, proclaimed that in the election of a new king no approval was required from the pope, a judgement which was given the force of law in the Diet of Frankfurt later that year. But all was not over. In 1343 the pope approached Charles of Bohemia (illustrated), offering him support if he were to make claim to the German throne. The Electors who had supported Louis now began to desert him, and in July 1346 five assembled at Rhens and elected Charles of Bohemia king with the title Charles IV. War seemed inevitable, but the following year, while out hunting, Louis died of a heart attack, and the long struggle over the German crown was at an end.

xxxxxCharles IV was crowned Holy Roman Emperor at Rome in 1355, and the following year, having returned to Nurnberg, he summoned the Electors and drew up The Golden Bull, so called because this vast document bore a golden seal (bulla in Latin). By this Bull, the election of the German ruler was placed totally in the hands of the Electors. There was no mention of the pope’s declared right to take part in his selection and approve the election. This was simply not acceptable. 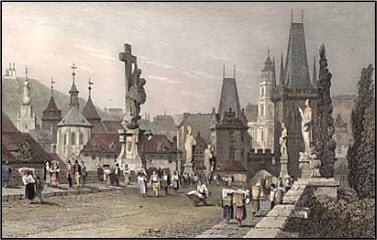 xxxxxIncidentally, Charles IV proved an able ruler and a generous patron of the arts and sciences. He took a personal interest in the development of Prague. He made this city his capital, and it became an important political and cultural centre during his reign. From his time onwards until the eighteenth century the German imperial crown was linked to the crown of the King of Bohemia. Furthermore, his succession agreements with the Hapsburgs of Austria and the Arpads of Hungary formed the basis of the future Austro-Hungary monarchy.