RIVAL COURTS AT YOSHINO AND KYOTO

xxxxxAs we have seen, it was in 1192 (R1), following a long civil war, that the new leader, Yoritomo, founded a military government based on the shogunate system, a regime whereby feudal lords, supported by their Samurai warriors, governed the country. By 1333, however, these “shoguns” had become so powerful that imperial forces overthrew them and Emperor Daigo ruled from Kyoto. But not for long. In 1336 he was driven from power and sixty years of civil war broke out between the southern court at Yoshino and the northern court at Kyoto. As we shall see, peace was not restored until 1392 (R2). 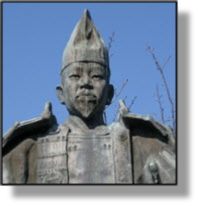 xxxxxAs we have seen, after a civil war which began in 1156 and dominated Japanese politics for virtually the whole of the reign of Henry II (1154-1189), the conflict came to an end in 1185. In 1192 (R1) the new leader Yoritomo (illustrated) founded a military government and introduced the shogunate system, a regime whereby hereditary feudal lords (Shoguns), with their military caste, the Samurai, governed the country, and the emperor became but a figurehead.

xxxxxBy 1333, however, these military strongmen had become so powerful that imperial forces, calling on local fighters, set out to overthrow them. This they 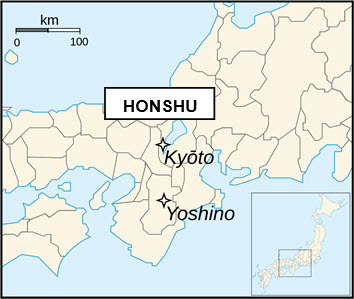 achieved, and a shogunate government which had ruled for 140 years was brought to an end. The emperor Go-Daigo returned to Kyoto and immediately set about restoring imperial rule. But the Kemmu restoration, as it was known, was short-lived. Many local warriors who had supported the imperial forces felt that their contribution to the downfall of the shoguns had not been sufficiently rewarded. In 1336, under their leader, Ashikaga Takauji, they drove Go-Daigo from Kyoto and enthroned their own rival emperor. There then followed nearly sixty years of civil war between the southern court in Yoshino and the northern court in Kyoto. As we shall see, peace was eventually restored in 1392 (R2), but during the long conflict the power of the local warlords was notably increased.