xxxxxThe Battle of Crécy was fought in 1346, some ten miles north-east of Abbeville. Here a weary English army faced a French force twice its size. However, the French cavalry, making some fifteen charges in close formation, proved easy targets for the arrow and spear. Before nightfall they were in full retreat, mainly due to the skill of the English longbowmen. The French chronicler Jean Froissart described how their arrows were “so thick that they appeared like snow”. It was in this battle that the young Prince Edward (later known as the Black Prince) won his spurs. Following their commanding victory, the English advanced on Calais and took the port after a year-long siege.

xxxxxThe battle was fought in August 1346 at the village of Crécy-en-Ponthieu, about ten miles north-east of the town of Abbeville. It was opened by an exchange between the Welsh and Genoese bowmen, the latter quickly losing out because their uncovered strings had been slackened by a sudden shower and proved ineffective. The French cavalry then attacked in close formation, making as many as fifteen charges, but they were easy targets for the longbowmen and spearman in the English front line, and before nightfall were in full retreat. In just a few hours, the longbow, in the hands of the English archers, had killed some 2,000 French troops. 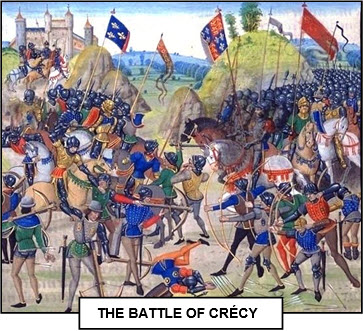 xxxxxThe French chronicler Jean Froissart, in his account of the battle, describes how the Genoese cross-bowmen had advanced with “fierce cry to affright the English, but they stood firm ... and retreated not a foot.” Then when they had come within firing range, the English archers stepped forward one pace and “let fly their arrows so regularly and so thick that it appeared like snow”. In the face of this onslaught the Genoese retreated, and when the French cavalry charged impatiently “they were met by the same deadly hail of arrows.” Then retreat turned into a rout, and more than 4,000 of the French army were left dead on the field. Froissart notes, too, that the English had a few primitive cannons in the field, but he makes no comment about their performance.

said that during the battle the young Prince Edward, aged sixteen, acquitted himself well and "won his spurs". It was probably later, perhaps at the Battle of Poitiers, that he came to be called the Black Prince. It is not known whether this was due to the colour of his armour or was simply a name given to him by the French.

xxxxxThe English victory was all the more surprising because after crossing the Seine and then fording the Somme below Abbeville, their army was anything but fresh and, having dwindled from its original size of 15,000 men, was probably outnumbered by well over two to one. Furthermore, the French were confident that the lightly armed English infantry were no match for their large force of cavalry. In the event, in just a few hours the longbow, in the hands of the English archers, had proved its superiority over the mounted, heavily-armoured knight and won a resounding victory.

xxxxxFollowing their victory, the English made straight for Calais and took the port after a year-long siege. The inhabitants were driven out and English people were settled there. It proved a valuable "bridgehead" for future military operations and was the Crown's last possession on the continent, remaining in English hands until 1558 (M1). 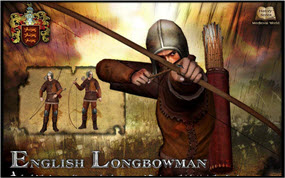 xxxxxIncidentally, The English longbow was made of yew and was so called because at six feet it was longer than any previous bow by some two feet. The bowstring itself was made of heavy cord and, when fully stretched, could shoot an arrow a distance of more than 200 yards. A well-trained archer could aim and shoot about 12 arrows a minute. To ensure a continuous rain of arrows, the archers were placed in several rows. While some rows were aiming and shooting, the others were preparing their bows for firing. Against such a sustained volley by Europe's most deadly weapon, even the heavy chain and plate armour worn by the horseman were no protection. The accuracy and power of this formidable weapon was confirmed in 1982 when 138 longbows were discovered aboard the wreck of Henry VIII's warship, the Mary Rose, when it was located just outside Portsmouth harbour. ……

xxxxx…… The V-sign used today possibly had its origins in these distant days, used, it has been suggested, to taunt the French by showing them the two arrow fingers. Indeed, it is said that when an English archer was captured these two fingers would often be cut off to make sure that he never used the longbow again! 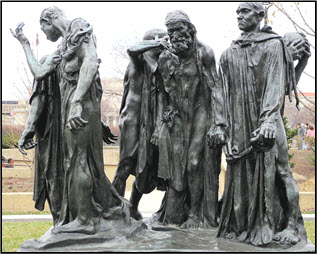 xxxxxMention must be made here of the Burghers of Calais, six men who offered to sacrifice their own lives in order to save the inhabitants of their town from further suffering. The year-long siege of Calais, which immediately followed the Battle of Crécy, caused such famine within the town that the six men offered themselves up as hostages to King Edward in return for the lifting of the siege. This incident was powerfully commemorated by the French sculptor Auguste Rodin when in 1888 he sculptured for the town a group statue of the six men, known today as Les Bourgeois de Calais (illustrated). The siege was lifted and we are told that the hostages were spared by the intervention of the English Queen, Philippa of Hainaut, a gentle and compassionate woman, who prevailed upon her husband to show mercy towards these brave citizens. To remember her part in the affair, in 1913 a bronze casting of the statue was installed in the gardens of Parliament in London.