xxxxxIbn Battuta, a Moroccan geographer, is remembered today for the sheer extent of his travels. Starting in 1325, he travelled the world over the next thirty years, covering some 72,000 miles. On his return, and with the aid of a “ghost writer”, he produced the Rihlah (or Travels), and this gave a valuable insight into many of the lesser-known areas that he visited, especially West Africa. At the start of his odyssey he made many influential friends, including Islamic mystics in Mecca and Medina, and this enabled him to travel in style, with a large number of attendants and his own harem! Nonetheless, his journeying, completed in 1353, was not without its share of disasters and dangers. 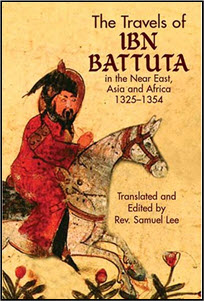 xxxxxIbn Battuta was an intrepid Moroccan geographer, born in Tangier, who went on a pilgrimage to Mecca in 1325 and then kept on going for some 72,000 miles! Thirty years later his travels had taken him all over the known world, and included the Middle East, South East Asia, Russia, China, India and vast areas of Africa. Fortunately for us, he returned to his homeland in about 1353 and, at the Sultan’s request, dictated his reminiscences to a writer named Ibn Juzayy. He polished up Battuta’s simple prose, added pieces of poetry, and produced the Rihlah (or Travels), sometimes given the more commercial title, The Adventures of Ibn Battuta.

xxxxxHaving completed his pilgrimage, Battuta stayed on in the Middle East for a number of years to study under the famous Muslim scholars of that time, including Islamic mystics in Mecca and Medina. His accumulated learning and, above all, the important contacts he then made were to stand him in good stead during his travels to come. Wherever he journeyed, both inside and outside the world of Islam, he was treated as a respected guest, and honours and gifts were showered upon him.

xxxxxIt was this generosity on the part of his hosts and well-wishers that enabled him to continue his journey ever further. Indeed, by the time he reached India, he was a man of some importance, with a large retinue of attendants and his own harem of wives and concubines. But although he was no medieval backpacker, his odyssey was not all plain sailing. During his wanderings, he was shipwrecked, waylaid by rebels, caught up in civil wars, and, on one occasion in India, came close to being killed at the hands of one of his erstwhile benefactors.

xxxxxThe Rihlah was completed in December 1357, and apart from providing a very full and complimentary account of the Muslim world at that time, it proved especially valuable as a source of social and economic history for lands outside of Europe, particularly Anatolia and parts of West Africa. In addition, some of his descriptive passages, notably those describing the cities of Constantinople and Damascus, make for good reading. The general content of his memoirs is genuine enough, although certain of his dates are clearly incorrect, and doubt has been voiced about the accuracy of some of his travels in the Far East.

xxxxxLittle is known of his life after his final return to Morocco. We do know, however, that he served as a judge and that he died and was buried in his native town of Tangier around 1368.

xxxxxIncidentally, it was Ibn Battuta who first brought attention to the enormous size of the Mali Empire when he visited there in 1352/1353 - at the time of its most powerful ruler Mansa Musa. Particularly valuable, too, was his account of his travels in Anatolia, just at a time when the rule of the Seljuk Turks was coming to an end and the Ottoman Empire was in its very early stages. 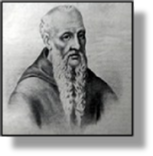 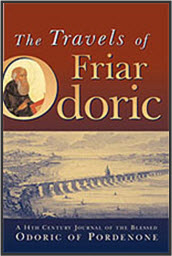 xxxxxAn earlier traveller, the Italian Franciscan friar Odoric of Pordenone (1286-1331) also deserves a mention. He returned to Italy in around 1330, and although his travels were not as extensive as those of Ibn Battuta, he covered a fair bit of ground, and he probably did it the hard way. In about 1316 he started off by travelling through Asia Minor, Persia, Iran and India, and then possibly saw something of Ceylon, Java and Borneo on his way to the south coast of China. He then travelled extensively in China, including Tibet, before returning to Italy. Here, at Padua, his story was written down in Latin by a fellow friar. He then set off for the papal court at Avignon but died on the way. It is said that on his travels he baptised no less than 20,000 people!