xxxxxThe Ming dynasty was founded by the Buddhist monk Chu Yuan-chang in 1368, following the decline of the Yuan Empire, established by the Mongol leader Kublai Khan (1260 H3). Proclaiming himself Emperor Hong Wu, by 1382 he had united all China under his control. As we shall see (1414 H5), this dynasty, which survived until 1644 (C1), brought social and economic stability, and became noted for its cultural and artistic achievements. One of the outstanding Chinese artists of this time was Ni Tsan (1301-74). His landscapes, executed in ink monochrome, were particularly noted for their simplicity. 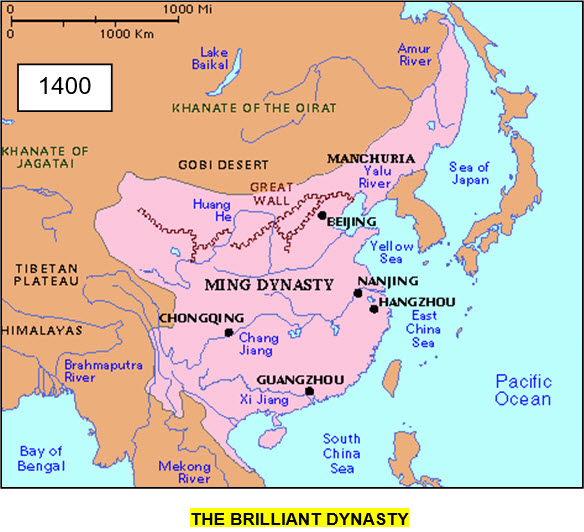 xxxxxThe Ming dynasty (the “Brilliant” dynasty) was founded by Chu Yuan-chang in 1368. He was an erstwhile Buddhist monk of humble origin who joined a rebel band and quickly became its leader. Taking advantage of the decline in the Mongol dynasty of the Yuan, established, as we have seen, by Kublai Khan (1260 H3), he captured Nanking in 1356. Then, having advanced his power throughout the Yangtze valley, he seized the capital of Khanbaligh and proclaimed himself Emperor Hong Wu. An autocratic leader - as were the Ming leaders who followed him - he had united all of China under his control by 1382. He brought in measures to assist the poor, strengthened the army, and introduced a new legal code to enforce his rule. He died in 1398.

xxxxxThe Ming Dynasty, purely Chinese, was sandwiched, as it were, between two alien dynasties, the Yuan of the Mongols - now at an end - and the Ch’ing of the Manchu which was to replace the Ming Dynasty in the seventeenth century. As we shall see (1414 H5), the Ming Dynasty brought social and economic stability, and was to become noted for its cultural and artistic achievements, particularly in the fields of painting and ceramics. It collapsed in 1644 (C1), but decay was in the air for some years before this date, caused in the main by over-population and threats from the Japanese and Manchu. 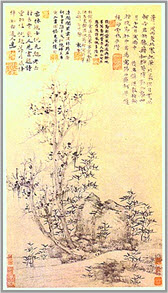 xxxxxOf this time is the Chinese artist Ni Tsan (1301-1374). Known as one of the Four Great Masters of the Yuan Dynasty, he is the most interesting of the group. A quiet, precise artist, he refused to serve the foreign (i.e. Mongol) dynasty of the Yuan, and spent some years as an ascetic, wandering around the countryside, painting as he went. He returned to urban life when the Ming dynasty was founded in 1368. His painting, mostly landscapes, is characterised by a marked simplicity, with but a suggestion of a subject matter and executed in ink monochrome. This unusual style is in stark contrast to the pictorial realism attempted earlier by the artists of the Southern Sung School.

Map (China): licensed under Creative Commons – https://mwhdownes2014-15.wikispaces.com. Ni Tsan: A large number of his landscapes can be seen in the Ni Tsan Collection, the National Museum of China, Beijing.