xxxxxAs we have seen, in the reign of Henry III, the Moors were virtually expelled from Spain. Christian forces had defeated the Almohads in 1212, and then in 1236 (H3) Ferdinand III of Castile and Leon had seized Cordoba. With the capture of Seville in 1248, only a small area around Granada remained in Arab hands. In 1340 however, the leader of Morocco, Abu al-Hasan, having won a naval victory off Gibraltar, invaded Spain with a vast army. He was met by a combined force led by Alfonso XI of Castile and Afonso IV of Portugal and, at the battle of Rio Salado, the Muslims were soundly defeated and forced to leave Spain. In his “holy war”, Abu al-Hasan had been supported by the ruler of Granada, Yusuf I. He managed to hold on to his territory, however, and, under his rule and that of his successor, the city fortress and its Alhambra palace became an important centre of learning and culture. It was not until 1492 (H7), in fact, that the city and the surrounding area were taken over by the Christians.

xxxxxWe have seen how, in the reign of Henry III, the Moors were virtually expelled from Spain. The Almohads had held sway over much of the country from the beginning of the twelfth century, but in 1212 the united forces of Castile, Aragon and Navare took on their army and convincingly defeated it at the Battle of Las Navas de Tolosa. This victory proved the beginning of the end for the Almohads. In 1236 (H3) the King of Castile and Leon, Ferdinand III, attacked and captured the town of Cordoba, and after this one city after another fell to the Christian forces. With the capture of Seville in 1248, only a small area in the south-east corner of Spain remained in Arab hands, centred on the city of Granada and its fortified palace of Alhambra (illustrated below). 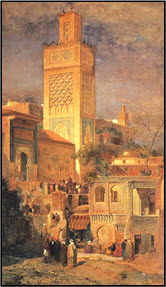 xxxxxAnd the situation remained like this until Abu al-Hasan (1297-1351) came to the throne of Morocco in 1331. He had two aims: to unite all the Islamic lands of north Africa and then re-conquer Spain for the Muslims. At first, he achieved some success. He captured both Algeciras and Gibraltar and in 1337 took the important Algerian town of Tlemcen (illustrated) after a three-year siege. Then, after winning a convincing naval battle in the Strait of Gibraltar in April 1340, he felt sufficiently confident to invade the Spanish mainland with a vast army. Here, however, he was confronted by a combined Christian force led by Alfonso XI of Castile and Afonso IV of Portugal. The two armies met at the Battle of Rio Salado, near Seville, in October 1340, and the Muslims were soundly defeated. Abu al-Hasan’s “holy war” against Spain was abandoned, the remnants of his army beating a swift retreat back to Africa. This was to prove the last attempt by the Muslims to conquer the Iberian peninsula. The stage was now set for the uniting of Spain into a national state, given time.

xxxxxAbu al-Hasan did go on to invade Tunisia and capture Tunis in 1347, but the following year his forces were crushed by Tunisian tribesmen at Kairouan and he fled to Algeria. He then set out to put down a rebellion in Morocco, led by his son, but his troops deserted him and he abdicated in 1351. He died later that year.

xxxxxAs for Granada, the ruler there (1333-1354), Yusuf I, had in fact supported Abu al-Hasan in his bid for conquest, but he managed to hold on to his territory by adopting a policy of isolationism. It was not until 1492 (H7), in fact, that this area of Spain was taken over by the Christians. Indeed, it was during this reign and that of Richard II that Yusuf, and his successor Muhammad V made Granada an important centre of culture and learning and completed the building of the Alhambra, one of the finest examples of Moorish architecture. 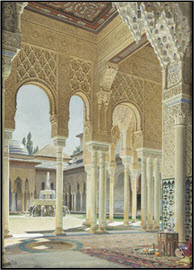 xxxxxAs noted earlier, the building of the Alhambra palace (illustrated) was begun in 1238 and was not completed until about 1358. Its entrance was defended by the Alcazaba or citadel, and parts of the massive walls, towers and ramparts of this fortress can still be seen today. The palace itself provides a fine example of Moorish architecture. There are six courts within the building. One, the Court of the Myrtle Trees, is particularly noted for its Muslim patios, whilst another contains a central fountain supported by twelve lions in white marble. Among the many halls and chambers is the Hall of the Ambassadors, one of the most ornately decorated rooms in the palace. The name Alhambra means “red” and derives from the colour of the rough-hewn bricks used in the building of the outer walls.