xxxxxLong before the Reformation of the 16th century, the English theologian and preacher John Wycliffe was leading a protest against the Catholic Church. In 1336, for example, he supported his king’s policy of not paying tribute money to the pope, and in 1374 he spoke out forcefully against the pope’s declared right to make appointments in the English church without consultation. From his Balliol College at Oxford or his church at Lutterworth in Leicestershire, he launched a series of attacks upon the abuse, the wealth and the corruption of the pope, the higher clergy, and the monastic movements. In his On Civil Lordship, published in 1376, he called for a return to a life of evangelical poverty as followed by Christ and his disciples. Unrighteous clergy should be removed from office by the state. He was condemned by the Bishop of London and the pope for his “erroneous teaching”, but, given the support of John of Gaunt, no action was taken against him. As we shall see, in the next reign (1382 R2) his protest was to become even stronger during the Great Schism. And it was in these later years that he formed the Lollards, and wrote the first complete English translation of the bible. 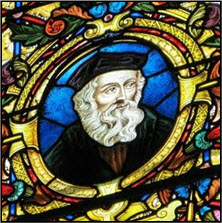 xxxxxAs we shall see, the driving force of the Reformation (a break-away movement from the doctrines of the Roman Catholic Church) came from outside England, from the influence of men like Luther and Calvin. However, before these men were even born a tradition of protest was already at work in England. Its founder was John Wycliffe, the great anti-clerical theologian and preacher. His radical writings and preaching were to earn him the title of “the Morning Star of the Reformation”.

xxxxxWycliffe was born in Yorkshire and studied for the priesthood at Balliol College, Oxford, becoming master of this college in about 1356. Here he gained a reputation for his controversial and forthright views. In 1366, for example, he addressed Parliament on the question of papal taxation and came down strongly in support of Edward’s policy not to send money (the papal tribute) to the pope, then strongly under French influence at Avignon. He was also opposed to the pope’s right to make appointments in the English church without consultation, and he made his views clear when this matter was discussed at Bruges in 1374. 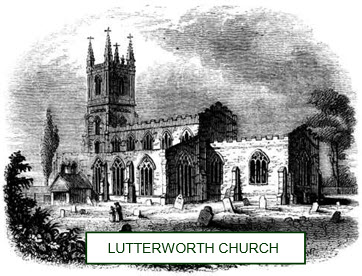 xxxxxIt was in that year that, through the good offices of his friend John of Gaunt - who was also a strong opponent of the pope, - he gained the Rectorship of Lutterworth in Leicestershire, a living he held for the rest of his life. It was mainly from here and at Oxford that he spelled out his overriding theme: his opposition to the pope and the whole papal system. His systematic attack was directed at the abuses, the wealth and the corruption of the pope, the cardinals, the higher clergy, the monks and the friars. Hardly anyone was spared his invective. The church, he declared, needed to return to the life of evangelical poverty as practised by Christ and his disciples. The bible, not the Church, was the supreme authority. His message was highly radical and highly popular, from the king and his nobles to parliament and the common people. 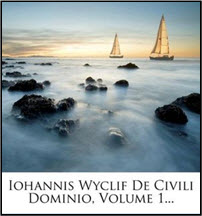 xxxxxThen in 1376 he produced his treatise On Civil Lordship (De Civili Dominio), one of his most influential works. In this, he argued that the right to all things came from God. It followed that unrighteous clergy should be removed from their living, not by the church, but by the state. This was virtually an open invitation for state seizure of church property. For such views he was summoned to St. Paul’s cathedral by the Bishop of London to answer charges of “erroneous teaching”. The meeting, held in February 1377, turned into a riot, with John of Gaunt’s supporters and a violent mob attacking the bishop’s men. In May the following year the pope, Gregory XI, condemned eighteen of Wycliffe’s conclusions and ordered his arrest. But again, no action was taken against him. Indeed, in that same year he agreed with Parliament that it was lawful to stop any treasure leaving the country for the papal court. He was now at the height of his popularity and influence, a patriot, a king’s man, and a man of the people.

xxxxxAs we shall see, in the next reign (1382 R2) his attack upon pope and clergy was to become even more vociferous and organised, doubtless encouraged by the unedifying spectacle of the Great Schism. And it was in these later years that he formed the Lollards - his large band of followers - and wrote the first complete English translation of the Bible.