xxxxxAs we have seen, it was in 1309 (E2) that a newly elected pope, to gain a measure of peace and security, took up residence at Avignon in southern France, thus starting the Babylonian Captivity. Here, the papacy came under French influence. All seven popes at Avignon were Frenchmen! As a result there was much opposition to this move, especially in England and Germany. Some good was achieved during this period - such as a reorganisation of church administration and the expansion of missionary work - but by 1360 there was a strong movement in favour of the papacy returning to Rome. Eventually in 1377, having concluded peace with Florence, Pope Gregory XI decided to make the move. But, as we shall see, this only made matters worse. On his death and the election of his successor, the cardinals of Avignon chose to appoint their own pope. Thus began the Great Schism in 1378 (R2), a split which was to last until the beginning of the 15th century and do great harm to the prestige and authority of the papacy.

xxxxxWe have seen how, at the beginning of the last reign (Edward II), the prestige and power of the papacy had fallen to an all-time low. The “outrage of Anagni” in which Boniface VIII was humiliated and ill-treated, led to the abandonment of Rome as the papal capital. In 1309 (E2) the newly-elected pope, the Frenchman Clement V, took up residence in the town of Avignon, southern France, in what has come to be known as the “Babylonian Captivity”. Certainly Avignon offered the papacy a far greater measure of peace and security than the Rome of that time, torn apart as it was by bitter feuds between aristocratic families. 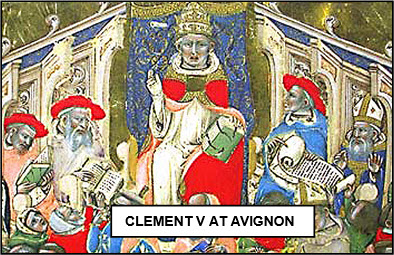 xxxxxAt Avignon, of course, the papacy came under strong French influence, and it is hardly surprising that all seven Avignonese popes were in fact Frenchmen. (And of the 134 cardinals appointed during this period 111 were French!). However, the papal stay at Avignon was not without benefit. During this period, a marked reorganisation of church administration and some reform of clerical conditions were achieved, and missionary work was also expanded. However, there was much opposition to this “captivity”, especially in England and Germany, and this did much damage to the prestige of the papacy. 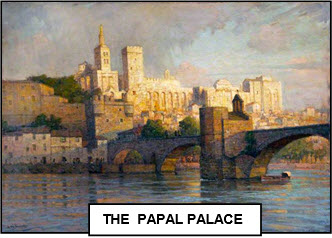 xxxxxThus by the 1360s there were many churchmen who argued for a return of the papacy to Rome. In its absence, the church lands in Italy had come under serious threat from an aggressive Florence, and its loss of ecclesiastical authority had undermined the status of the Roman Catholic Church throughout Europe. Many feared that such a situation would continue and might become worse while the papal court remained at Avignon. Indeed, in 1367 the then pope, Urban V, had returned to Rome for some three years in a vain attempt to re-establish the authority of the church in Italy and to bring about a reconciliation between the Latin and Greek churches. He returned to the safety of Avignon when further troubles broke out in Rome and the Papal States. 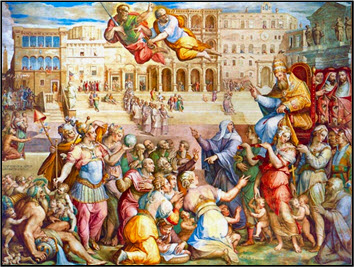 xxxxxGregory XI, who became pope in 1370, was strongly in favour of a return to Rome, but the move had to be delayed for a number of years. Before his departure he had two aims in mind: to bring an end to the war between England and France, resumed in 1369, and to defeat the city of Florence, busily involved in a war against the Papal States. He failed in his first aim, but succeeded in his second. Having concluded peace with Florence at the end of 1376, he decided to move back to Rome. This he did in January 1377 (illustrated), despite opposition from a number of cardinals, and, as one would expect, the French monarchy.

xxxxxThe return to Rome was an important one; from henceforth the papal headquarters were to remain in this city. However, as we shall see, the move brought more troubles than it set out to solve. On the death of Gregory, the Italian Urban VI was elected in his place, but he proved unacceptable to the cardinals of Avignon, who had grown to be a significant power-bloc during the “captivity”. They appointed their own pope, Clement VII, in 1378 (R2) and the Great Schism had begun. It was to last until the beginning of the fifteenth century - at one time there were three popes! - and was to do immeasurable harm to the prestige and authority of the papacy.