xxxxxThe English poet William Langland wrote a number of versions of his masterpiece, The Vision of William Concerning Piers the Plowman, during the years 1362 to 1386. A worldly and spiritual work, it describes the hardship of the common people and, like the works of Geoffrey Chaucer, is one of the great poems of medieval England. Alongside a scathing attack upon the corruption of the church and privileged classes goes a series of visions in which the soul of Piers seeks to find the best way of life. Via abstract beings such as Reason and Conscience, he is eventually transformed into a Christ-like figure, judging all of mankind. Some doubt has been cast about Langland’s authorship of this work.

xxxxxThe English poet William Langland was born in the West Midlands - possibly at Ledbury in Shropshire, - and was probably educated at the Benedictine monastery at Great Malvern. Details of his early life are sparse, but according to his writing, he spent some time in London where he fell on hard times and often had to beg to survive. He later drew on this experience in his poetic works - and to good effect. 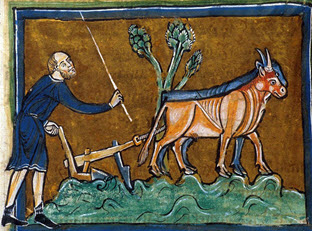 xxxxxHis alliterative poem The Vision of William Concerning Piers the Plowman was written in a number of versions, possibly as many as four, between 1362 and 1386. It is quite easy to read, but not always easy to understand. It is both a worldly and spiritual work. In it he describes the poverty, misery and hard life of the common people, and roundly condemns, by way of satire, the moral and social evils of the day. He is particularly scathing towards the corruption within the church and privileged classes, contrasting this with the dignity of the working man and the value of his labour.

xxxxxInterwoven into this social commentary is a second motive, a series of dreams or visions in which the soul of Piers - presumably that of Langland himself, - seeks to find the good, better and best way of life via abstract “beings” such as Reason and Conscience. Eventually, in his search for the love of God, Piers is transformed from a poor peasant, tilling the soil, to a Christ-like figure, judging mankind and condemning its shortcomings.

xxxxxPiers the Plowman is considered one of the greatest poems of medieval England and can take its place alongside the works of Geoffrey Chaucer. It is a masterpiece, subtly combining a spiritual pilgrimage of a soul in search of God’s love, with a satirical, sometimes bitter appraisal of a wide variety of scenes from contemporary life. 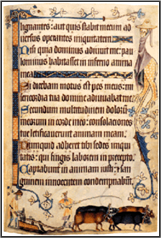 xxxxxIncidentally, it must be said that some doubt has been cast upon the authorship of Piers the Plowman. Certainly other works once attributed to Langland - such as the shorter poems Piers the Plowman’s Creed and Richard Redeless - are now thought to have been written by another, unknown writer. Some scholars even claim that Piers Plowman was unlikely to have been written by Langland, whilst others argue that it was the work of five poets. Be that as it may, three manuscript versions of the poem are in existence today. ……

xxxxx…… And whoever the author might have been, the poem begins on the slopes of the Malvern Hills in Worcestershire.