xxxxxThe French surgeon Guy de Chauliac is best known for his Chirurgia magna (Great Surgery). Published in 1363, it became a standard work for some 250 years. He spent much of his life at Avignon and served three popes during the Babylonian Captivity. 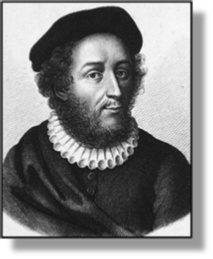 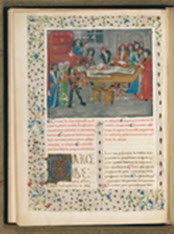 xxxxxOne of the foremost surgeons of his day, the Frenchman Guy de Chauliac spent much of his life at Avignon where he was a physician to three popes during the “Babylonian Captivity”. His Chirurgia magna (Great Surgery) was published in 1363. Based on experience and careful observation, it remained a standard work in its field until well into the seventeenth century. Among subjects discussed were the treatment for wounds, fractures, hernias and cataracts, and the provision of soporifics by means of narcotic inhalation.

xxxxxBorn at Chauliac in the Auvergne, he took holy orders and studied at Toulouse, Montpellier, Paris and Bologna. He died at Avignon in 1368.

Guy de Chauliac: 14th century drawing, artist unknown – from An Introduction to the History of Medicine by the American medical historian Fielding H. Garrison (1870-1935), published by W.B. Saunders Company in 1914.