xxxxxAs we have seen (1307 E2), the Florentine artist Giotto di Bondone is often regarded as the founder of modern painting. He was one of the first to break away from the rigid, unemotional style typical of Gothic and Byzantine art - as can be seen in his wooden-panel painting The Madonna in Glory, and in his frescoes in the Arena Chapel, Padua, illustrating the Last Judgement. He did not take up architecture until 1334, when he was appointed surveyor of the Duomo in Florence. It was in that year that he designed the cathedral’s bell tower. This took 20 years to complete and, while it bears his name today, many alterations were made during this time. His original design only survives on the west side of the tower. Adorned with exquisite bas-reliefs and different coloured marbles, the tower is a fitting reminder of Bondone’s outstanding contribution in the field of visual art. 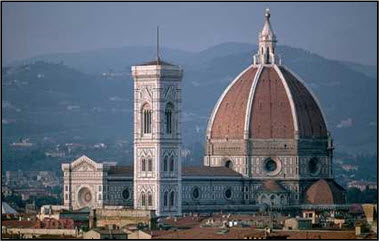 xxxxxAs we have seen (1307 E2), as a painter, the Florentine artist Giotto di Bondone is widely regarded as the founder of modern painting, breaking away as he did from the stylised, two dimensional figures so typical of Gothic and Byzantine art. He wished to portray nature rather than a symbolised form of it, and this is clearly illustrated in one of his earliest works, a large series of frescoes in the Arena Chapel in Padua illustrating the Last Judgement and, among others, the lives of Christ and the Virgin Mary. As we have seen, this series was completed in about 1307, at the beginning of the reign of Edward II, and it was around this time, too, that he began work on The Madonna in Glory, a wooden-panel painting which testifies even more to his break from the rigid, unemotional style of the past.

xxxxxHe appears to have come to architecture late in life. He was appointed director of public works in the city of Florence and surveyor of the Duomo there in 1334, more likely as a tribute to his work as a painter than to his skill as an architect. It was in that year that he designed the cathedral’s slim, free-standing bell tower or campanile and work was begun on its construction. Built by cathedral masons, it took twenty years or more to complete and alterations to the design were made during that time. Giotto died just three years into the work but, according to a drawing in Siena, his original design survives on the west side of the tower (illustrated). It is his sole surviving work as an architect. Adorned with exquisite bas-reliefs and different coloured marbles, it is certainly one of the most beautiful bell towers to be seen in Italy. Today, the campanile is popularly known as the Giotto tower, a fitting reminder of this man and his major contribution in the field of visual art.

xxxxxIt was the Italian sculptor Andrea Pisano (1290-c1349) who, as Giotto’s assistant, completed the stone reliefs on the lower sections of the bell tower. He is best remembered, however, for his magnificent relief panels which make up the bronze doors at the south entrance to the Florence Baptistry. Completed in 1336, 20 panels depict scenes from the life of John the Baptist, and gilded figures illustrate the eight virtues. 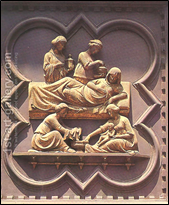 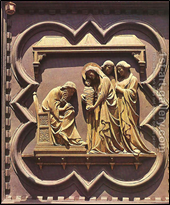 xxxxxA man who came very much under the influence of Giotto and was at one time his assistant was the Italian sculptor Andrea Pisano. After Giotto’s death he continued to carve the stone reliefs on the lower sections of the bell tower and, as chief architect, to oversee the work of construction. He is best known, however, for his skilfully executed relief panels on the bronze doors at the south entrance to the Florence Baptistry. Completed in 1336, the twenty panels depict scenes from the life of John the Baptist, together with gilded figures illustrating the eight virtues. In this work, the influence of Giotto can be clearly seen in the solid, rounded nature of the figures. (panels illustrated)

xxxxxPisano was born in Pontadera in 1290, and probably received his early training at or near Pisa, but the bulk of his work was carried out at Florence, where he came to be regarded as the founder of the school of sculpture. It would seem that he left Florence in about 1347 and spent the rest of his life at Orvieto, where he was in charge of the construction and decoration of the cathedral there. He died in 1348 or 1349.

xxxxxExquisite though Pisano’s bronze work was on the southern doors of the Florence Baptistry, we shall see that it was surpassed in the next century (1423 H6) by the Florentine artist Lorenzo Ghiberti. His workmanship on the doors of the eastern entrance marked the beginning of the golden age of bronze casting in his native city. So rare in beauty did Michelangelo consider these doors to be, that he called them The Gates of Paradise.

xxxxxAlso worthy of note is the Florentine artist Taddeo Gaddi (c1300-c1366). A pupil of Giotto, he became the leading painter in Florence after his master’s death. Although his work owed much to Giotto’s style, there is less emphasis on the dramatic, and thus his frescoes have not so great an impact. By the early 1330s he was working with Giotto on the frescoes in the Santa Croce in Florence. His own paintings, scenes from the life of the Virgin Mary and Christ, were completed in 1338 as part of the decoration of the Baroncelli Chapel there. Shown here is a detail from his Allegory of the Cross.

xxxxxDeserving of special mention is his Annunciation to the Shepherds, notable for its effective lighting, and his Tree of Life, depicting scenes from the life of St. Bonaventure, painted in the refectory at Santa Croce. In 1355, like his master, he produced a Madonna in Glory, now to be seen in the Uffizi gallery in Florence. He spent most of his life in or around his native city.

Shown below are The Annunciation, The Presentation of Mary in the Temple, and The Crucifixion.