xxxxxThe Italian writer and poet Giovanni Boccaccio spent his early years in Florence, but studied in Naples for a number of years. It was on his return to Florence in 1341 that he produced some of his finest work, including his masterpiece the Decameron, completed in 1353. This tells of ten young men and women who, having gone to a villa outside the city to avoid the Black Death, tell stories to each other over a period of ten days. The result is a feast of spirited tales ranging across the whole gambit of human emotion, and taken from a wealth of different sources. This work above all perfected the Italian classical style. In 1350, however, he met the poet Plutarch, and under his influence wrote a large number of scholarly works in Latin - including biographies of famous men and women, and his encyclopaedia, a defence of poetry entitled The Genealogy of the Gentile Gods - and, via classical Greek, he made close studies of history, literature and mythology. He also spent time searching out Latin classical texts. Much of his prose and poetry put man at the centre of the stage, without reference to any divine intervention. This and his recovery of classical works of antiquity played a large part in laying the foundations of Renaissance literature and humanism. Among poets he influenced were Chaucer, Shakespeare and Dryden. 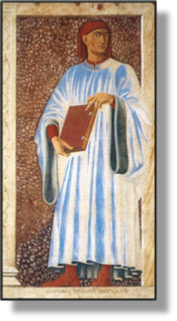 xxxxxThe famed Italian writer and poet Giovanni Boccaccio was probably born in Paris, but he spent his early years in Florence. At about the age of fifteen he was sent to Naples by his father to study canon law and enter business, probably banking. But his literary talent quickly emerged. It was during his stay at Naples that he composed the long prose romance Il Filocolo, the poem Il Filostrato, and the verse narrative Teseida, these works probably being inspired by his mistress, the colourful and unidentified Fiammetta.

xxxxxHe returned to Florence about 1341, and during the next ten years or so produced some of his best work, all in an Italian classical style. To this period, for example, belongs the prose works Il ninfale d’Ameto, a story about nymphs, and the Elegia di Madonna Fiammetta, for his lady friend, together with the poem Il ninfale fiesolano, again about nymphs. It was in 1348 that he began to put together a collection of stories which were to make up his masterpiece, the Decameron. The work took five years to complete. 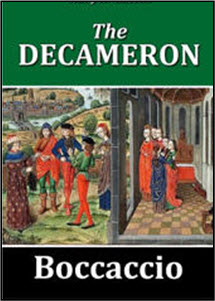 xxxxxThe Decameron, completed in 1353, tells of ten young well-bred and articulate friends (seven women and three men) who go to stay in a villa outside Florence in 1348 to escape the Black Death, then raging throughout the city. They stay there for ten working days (hence the title of the poem) and, to keep themselves amused, they each tell a story to the others every day. The outcome is a feast of one hundred tales, varying in content from the light-hearted to the gloomy, the tragic to the humorous, the romantic to the sombre, and the witty to the downright earthy. The character of each person is brilliantly drawn, and the spirited stories contain material from a wealth of sources, including the Greek and Latin classics, French fables and contemporary Italian life. And each day’s allocation of stories is followed by a canzone, a song for dancing which provides a vehicle for some of Boccaccio’s finest lyrical poetry.

xxxxxEntertainment aside, the work also has other underlying themes. It studies the refined life of the bourgeoisie, showing their respect for convention but their determination never to let it dictate their personal behaviour. And it places man in the centre of the stage. Man must come to terms with life and confine his aspirations to what is humanely possible. There is no mention of divine intervention here, or even the hope of it. 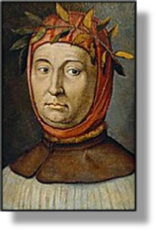 xxxxxAfter 1350 much of his work was influenced by the poet Petrarch (illustrated), whom he met in that year and came to regard as his tutor. It was he who steered Boccaccio towards the humanities, encouraging him to learn and translate classical Greek in the study of literature, history and mythology. Thus Boccaccio, now writing in Latin, turned to more scholarly subjects, such as his geographical study concerning mountains, his biographical works on illustrious men and famous women, and his encyclopaedia entitled The Genealogy of the Gentile Gods, a defence of poetry and a mythological reference book. He also lectured on Dante’s Divine Comedy, a poet and poem he greatly admired, and founded at Florentine University the first chair in Greek of any university in Western Europe. And he also spent much time in recovering Latin classical texts, notable those of Seneca, Ovid and Tacitus.

xxxxxBoccaccio’s works in prose and poetry, and the Decamaron in particular, produced a perfect example of Italian classical prose, and rediscovered, too, the classical works of antiquity, thus laying the foundation for Renaissance literature and humanism. This was an outstanding contribution. Furthermore he greatly influenced many writers and poets, including Geoffrey Chaucer, William Shakespeare and John Dryden. Indeed, in the case of Chaucer, the Canterbury Tales has a structure or framework which is closely modelled on that of the Decameron, and The Knight’s Tale owes much to Boccaccio’s earlier work, Teseida.

xxxxxBoccaccio spent much of his life in poverty save for a short time when he undertook various political missions for the Florentine Commune. In 1363 he moved to the little village of Certaldo, only returning to Florence to lecture on Dante. In 1374 ill-health and the death of his dear friend Petrarch caused him to lose heart. He died the following year and was buried in the church of Santi Michele e Jacapo in Certaldo.