DUKE OF LANCASTER FROM 1362

xxxxxAs we have seen, John of Gaunt, the Duke of Lancaster and fourth son of Edward III, played an active role during his father’s reign. And it was he who in 1371, when his brother the Black Prince was forced to return home through sickness, took over command of the English army in France. By then, however, the conflict with the French was virtually decided, and was brought to an end by the Treaty of Bruges four years later. Gaunt then returned to England and, for the last three years of his father’s reign, virtually controlled the country. Then, during the minority of Richard II, he played a vital role in keeping a troubled peace between the rival groups of barons. In the affairs of state he was openly hostile to the clergy, strongly supporting John Wycliffe in his denunciation of their wealth and power. He also had a close friendship with the poet Geoffrey Chaucer, whose first major work, the Book of the Duchess, was written as an elegy for Blanche, Gaunt's first wife. Via his second wife Constance, heiress of Peter I of Castile, he laid claim to the Castilian crown, but was defeated in battle and was obliged to renounce his claim in 1388. He died ten years later and it was then that his son, Henry Bolingbroke, returned from exile and, capturing Richard II, put himself on the throne as Henry IV, the first of the Lancastrian kings. 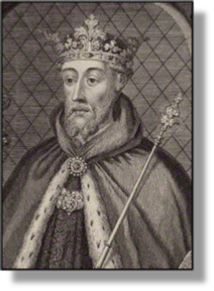 xxxxxAs we have seen John of Gaunt, fourth son of Edward III, and Duke of Lancaster from the age of 22, played a conspicuous role in the reign of his father. He took part in the wars of the period, and achieved some success alongside his brother the Black Prince, both in a short campaign in Spain, and in the continuing war against France. Outstanding victories were followed in 1360 by the Treaty of Calais whereby England gained sovereignty over Aquitaine, a large duchy in the south west of France.

xxxxxFrom then onwards, however, events took a turn for the worse. When the war was resumed in the late 1360s, the French adopted guerrilla tactics, avoiding open conflict and stirring up national opposition against the English presence. Slowly the French regained lost ground. Then in 1371 a serious illness forced the Black Prince to return home. John took over command of the English army, but by then the conflict was virtually decided. In 1375 when the Treaty of Bruges brought a pause in the hostilities, England had lost all but a handful of possessions on the continent. Nor did Lancaster achieve much on his return home. The king being handicapped by old age, he took over control of the country during the last three years of the reign, aided and abetted by his father’s mistress Alice Perrers. His rule, corrupt and inefficient, was condemned by Parliament and by his ailing brother the Black Prince.

xxxxxWith the death of his father in 1377, John continued to play a major part in the government of the country, this time during Richard II’s minority and subsequent rule. Now, however, his role was of greater value. There was much baronial opposition to the king, led by his younger brother Thomas Woodstock, Earl of Gloucester, and he was thus able to play a useful part in mediating between the rival factions. Apart from his absence in the late 1380s, (when he led a disastrous expedition to Spain and during which time the baronial party seized power) he managed to maintain a troubled peace until just before his death. Then the king, seeking revenge against a group of his barons, executed some and banished others. Amongst those exiled was John’s son, Henry of Bolingbroke. It was he who, on learning that Richard had seized all the Lancastrian estates on the death of his father in 1399, invaded England, defeated the king, and put himself on the throne as Henry IV, the first of the Lancastrian monarchs.

xxxxxJohn’s interest in Spain stemmed from his second marriage. His first marriage to Blanche gained for him the Duchy of Lancaster. After her death in 1369, he married Constance, heiress of Peter I of Castile, and claimed the Castilian crown. In 1386 he invaded Spain to seize the throne, but his army was soundly defeated. He was forced to give up his claim in 1388, but retained his link with Spanish royalty when he married his daughter, Catherine, to the nobleman who eventually became king Henry III of Castile and Leon.

xxxxxIn the affairs of state, John was openly hostile to the higher clergy, seeing them as a political threat. He strongly opposed their wealth, privileges and power. It is doubtless for this reason that he supported the church reformer John Wycliffe (illustrated), a man he clearly admired for his forthright condemnation of the papacy. It was probably through him that Wycliffe obtained the rectorship at Lutterworth in Leicestershire, and it was certainly his "heavy mob" which turned up at St. Paul’s Cathedral in February 1377 when Wycliffe was summoned to explain himself before the Church authorities. The meeting broke up in disorder and no charges were made. 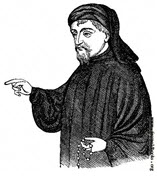 xxxxxJohn also had a close and lasting friendship with Geoffrey Chaucer (illustrated). It is likely that, as young men, they met at Christmas in 1357 when both were at the Countess of Ulster’s residence in Yorkshire. Chaucer’s first major poem, the Book of the Duchess, was written as an elegy for Blanche, John’s first wife, soon after she died of the plague in 1369. It is known, too, that several times after that Chaucer and his wife received gifts of money from John. And in his last years Chaucer became very friendly with John’s son, the Earl of Derby, the future king Henry IV. When he eventually came to the throne he confirmed that the grants he received from Richard II would continue, and he added his own, generous annuity.

xxxxxIncidentally, John of Gaunt was born at Ghent, and Gaunt is simply a corruption of his birthplace. We are told that the name was never used after he had reached the age of three, but came into popular usage after Shakespeare used it in his play Richard II.