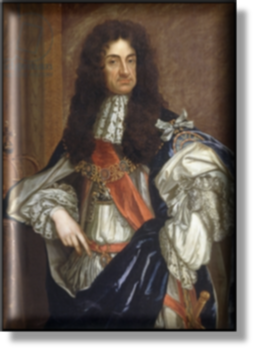 xxxxxThe RESTORATION of the monarchy in 1660 in the person of Charles II - a handsome, intelligent, cultured young man - was widely welcomed by the mass of the people, concerned as they had been over the political uncertainty of Cromwell's Protectorate, and tired as they had become of the drabness and restrictions of Puritanical rule. At parliamentary level, too, there was relief at the return of a more dependable system of succession, and cautious optimism at their new monarch's assurance that the authority of Parliament was "most necessary for the government of our kingdom". If such could be taken on its face value, then this was indeed a welcome change from the attitude of his father who, as we have seen (C1), had governed in his own right for eleven years, and then plunged the country into five years or more of bloody civil war.

Charles II was just twelve years old at the start of the Civil War, and during the conflict lived at his father's headquarters in Oxford. In 1645, when the royalist cause was all but lost, he fled first to the Scilly Isles and then to Jersey before joining his mother in Paris. Following his father's execution in 1649, the young Charles Stuart formed an ill-advised alliance with the Presbyterian Scots and, having been "crowned" Charles II at Scone in 1650, led an army into England. At the Battle of Worcester in 1651, however, his force was soundly defeated by Oliver Cromwell, and he only just managed to escape. After six weeks on the run, he eventually made it back to France, and returned to a life of waiting and wandering. In 1658, however, events moved in his favour. The sudden death of Oliver Cromwell, and the reluctance of his son, Richard, to assume control of a country in chaos, brought the cavalry to the rescue. As we have seen, in 1660 (CW), General Monck led his army to London and recalled the Long Parliament. Its members invited Charles Stuart to take the throne, and this he did after promising - via the Declaration of Breda - a general amnesty, religious toleration, and a "free Parliament".

xxxxxCharles arrived in London amid much rejoicing and was soon dubbed the "Merry Monarch". Within a few days theatres were reopened, secular music was heard once again, and children and adults alike enjoyed a variety of sports and games. But beyond the first flush of jubilation, loomed a reign which was to be beset with problems. There were, first and foremost, two natural catastrophes, the Great Plague of 1665, and the Great Fire of London the following year. In the first, some 70,000 lost their lives in the capital alone; in the second 400 acres of the city were laid to waste. And at the same time the navy, starved of funds, suffered a humiliating defeat in the Second Anglo-Dutch War, with Dutch warships sailing unchallenged up the Thames and Medway, and destroying much of the English fleet moored at Chatham. This miserable performance gave Charles the opportunity to dismiss his austere chief minister, the Earl of Clarendon, and replace him with a group of five ministers on whom he could rely - known as his “Cabal” because the initial letter of their names made up that word. Via these close friends he hoped to rely on Parliament as little as possible, draw closer to France, and take his revenge on the Dutch. 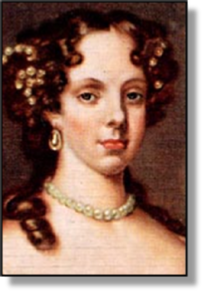 xxxxxAnother problem, and one that loomed large, was the monarch's desperate need for money to maintain his extravagant life style. As early as 1662 he had sold Dunkirk, England's only possession on the continent, to France for £400,000. And in the same year he married the Portuguese princess Catherine of Braganza (illustrated) for her large dowry. He now conjured up another and more lucrative source of income. Whilst a Protestant in public, he was secretly attracted to the Roman Catholic faith. Inx1670, in order to wring some money out of his young nephew, Louis XIV of France, he signed a deal with him known as the Treaty of Dover. This not only allied England with Catholic France against Protestant Holland - a most unpopular move - but, by a secret clause, Charles agreed to restore Roman Catholicism in England in return for an annual pension and the prov

ision of troops if this action provoked armed rebellion. But the payments proved insufficient to keep up the war, and England made its own separate peace with Holland to end the Third Anglo-Dutch War in 1674.

xxxxxBut by this time another problem was emerging, the question of the succession. Whilst Charles had fathered 14 children by his large bevy of mistresses - including the famous Nell Gwynne - his wife had not produced an heir. The successor to the throne, therefore, was his brother, James, Duke of York, an avowed Roman Catholic, and a man disliked for his belief in absolute authority. Matters came to a head with the disclosure of the Popish Plot of 1678, put forward by the discredited cleric Titus Oates. This alleged that Roman Catholics were planning to kill the king and replace him by his brother. Although later proved to have little foundation, this revelation resulted in widespread panic, and the king felt obliged to send his brother out of the country. Three parliaments followed and fell in quick succession. Eventually Shaftsbury and his anti-Catholic Whig supporters managed to seize key positions in the government and put forward the Exclusion Bill of 1679, banning the Duke of York from the succession. At this point the country was near to civil conflict again, but in 1680 the Lords turned down the bill, and the following year Charles abruptly dismissed parliament and ruled alone, living comfortably off a generous annual allowance from Louis XIV. For the general public this was preferable to yet another open conflict between Parliament and Crown.

xxxxxThen two years later the Rye House Plot came to light, a plan allegedly drawn up by a group of leading Whigs to kill both the king and his brother as they returned to London after a race meeting at Newmarket. Charles seized the opportunity to rid himself of some of his opponents in Parliament. A number of Whigs were arrested, and the Earl of Essex, Lord William Russell and Algernon Sidney were convicted of treason on somewhat flimsy evidence. The Earl of Essex took his own life in the Tower; the other two were beheaded. The probable leader of the plot, the Duke of Monmouth (one of the king's illegitimate sons) escaped to Holland, together with Shaftsbury.

xxxxxBy no means could Charles II be regarded as a great monarch. A bon viveur, gambler and womaniser, he clearly loved the good life above the interests of his realm. This said, he was very popular with the common people, and although he was attracted to Roman Catholicism, he was genuinely in favour of a broad church settlement. Hexopposed the Clarendon Code, a series of measures passed by the Cavalier parliament (beginning in 1661) to penalise dissenters, and in 1672 attempted to suspend the laws against all Nonconformists in his Declaration of Indulgence - thwarted by parliament's Test Acts of 1673 and 1678, a set of harsh laws against all non-Anglicans.

xxxxxHe was, too, a cultured man who took an interest in the arts - particularly in music - and, by his patronage, enhanced the work of the Royal Academy. Perhaps, then, the epitaph conjured up by the Earl of Rochester, one of his high-life revellers, was a little too severe - "Here lies our Sovereign Lord the King, Whose word no man relies on, who never said a foolish thing, And never did a wise one".

xxxxxAnd the reign as a whole, despite its ups and downs, brought a large measure of stability to a country which, well within living memory, had seen the ravages of a civil war and the disquieting uncertainties of a pioneer experiment in republicanism. And the two Anglo-Dutch Wars, disastrous though the first one was in the military sense, were not devoid of success. They proved a triumph in economic terms - opening up the trade routes to an expanding mercantile marine -, whilst the capture of New Amsterdam (renamed New York), with its fine harbour and commanding position, served to consolidate the British colonies then developing in North America.

xxxxxCharles died peacefully at Whitehall Palace in February 1685. Evidently his last words were "And let not poor Nelly starve". (We are not told whether the Queen was there at the time!).  Despite widespread fears for the consequences, he was succeeded by his bother as James II. 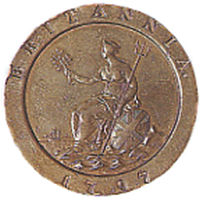 xxxxxIncidentally, Frances Stewart, one of the king's few lady friends whom he failed to entice into his bed, gained a greater claim to fame. Charles commissioned a goldsmith to trace her profile and this was used to personify "Britannia", a figure depicted on English coinage ever since. ……

xxxxx…… The terms "Whigs" and "Tories" were terms of abuse which came into use to denote the two major political parties in parliament during the heated dispute over the Exclusion Bill of 1679. Whigs - the anti-Catholic party - was a name generally applied to horse thieves, though it might have derived from Whiggamore, a derogatory term for Covenanters in Scotland. Tories - those supporting the succession of the Catholic James, Duke of York - meant, in Old Irish, papist outlaws or fugitives. The names have stuck, but what each party stands for has substantially changed, of course, over the years. 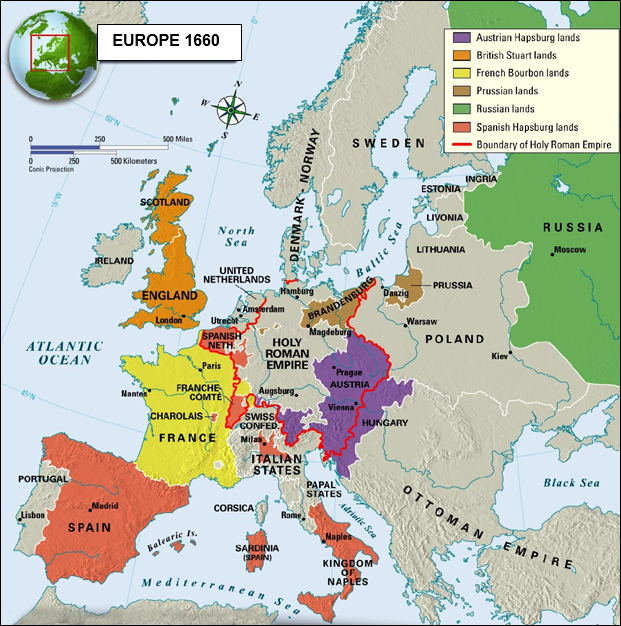