xxxxxJacob van Ruisdael is generally considered to be the greatest of Dutch landscape artists. He spent most of his life in Holland, moving permanently to Amsterdam in 1659. He produced about 700 paintings, many depicting the typical landscape of his homeland - low horizons, vast clouded skies and foregrounds of dune, sea and woodland. His early works tend to be dramatic and, like Jewish Cemetery, and Winter Landscape, have an air of sadness and foreboding. His The Windmill at Wijk, painted in 1671, is typical of his later work. Watermills and old, gnarled trees also caught his eye, and all his work shows a brilliant control of lighting effects. He also painted some dramatic seascapes, and his drawings, many preparatory studies, showed his remarkable talent as a draughtsman. His most brilliant pupil was Meindert Hobbema, but he also influenced a number of 19th century artists, including Constable, the Norwich School in England, and the Barbizon School in France. 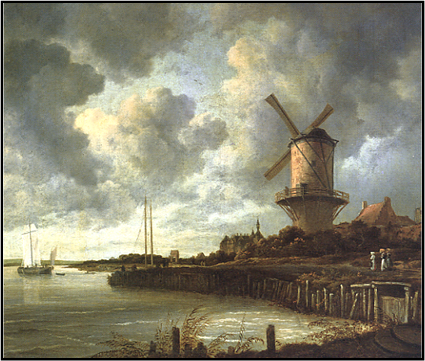 xxxxxFrom the earliest times, landscape painting formed part of Chinese art, depicting as it did the elements and the change of the seasons, but in the Western World it was not until the 17th century that this art form really came into its own as an independent subject, centred in the Netherlands. Here, the artist Jacob van Ruisdael is generally considered to be the greatest of Dutch landscape painters. He was born in Haarlem and was probably trained by his father, an art dealer and minor artist, and by his more talented uncle, Salomon Ruisdael. Such was the promise he showed at this early stage that he was accepted as a member of the Haarlem Guild of St. Luke while still in his teens. He travelled widely in Holland, and moved permanently to Amsterdam in 1659. He visited western Germany on a number of occasions, but he never went to Scandinavia, despite producing pictures of the area - it appears he "borrowed" views from a fellow artist! There is just a possibility that he visited Caen in France, and studied medicine around 1676 - later practising in Amsterdam - but the evidence for this is rather flimsy and such an idea would seem improbable. 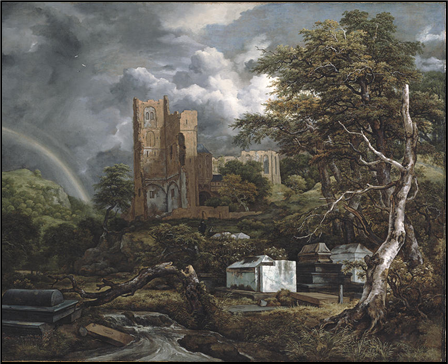 xxxxxHe produced about 700 paintings in a comparatively short lifetime. Although he did paint a large number of German and Scandinavian scenes, he is best remembered today for his brilliant rendering of the typical landscape of his homeland, with its low horizons, vast clouded skies, and foregrounds of dune, sea or woodland. Many of his works, particularly the early ones, show a fondness for the dramatic, and at times an air of inexplicable sadness, even of foreboding, pervades his scenes. Among such dark-toned, brooding works are his Hilly Wooded Landscape with Cattle, his famous Jewish Cemetery (illustrated on left), and two winter scenes, the monochrome A Village in Winter, and the bleak Winter Landscape (illustrated below).

xxxxxAfter about 1656 his work took on a lighter touch, and he provided typical scenes of Dutch countryside on a broad canvas, like the Windmill at Wijk of 1671 (illustrated above) and various panoramic views overlooking Haarlem, a number of them imaginative rather than factual. To this later period belongs Le Coup de Soleil and View of Haarlem with the Bleaching Grounds, both remarkable for their depth of vision, and with the latter showing the bleaching of linen strips in the foreground - an important local industry - and, in the background, the gothic church of St. Bavo where the artist is buried. In these and all his works he shows a brilliant control of lighting effects, and his ability to create mood and atmosphere in his compositions was admired as a "lyrical quality" by the German poet Goethe. 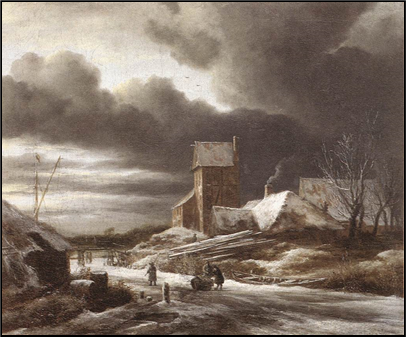 xxxxxApart from moody, menacing skies, Ruisdael was fascinated by trees, and many a dead, gnarled or windswept version looms large in his detailed studies of the countryside. In this respect The Great Oak, painted in 1652, is worthy of note (illustrated below). Here, as in many of his paintings, the small figures which animate the scene (known as staffage) were painted by artists specialising in this type of work. Watermills and waterfalls also caught his eye, doubtless because of the pent-up energy they contained. Two works on this theme are to be seen in the National Gallery, London, - Two Watermills and an Open Sluice, and A Waterfall in rocky landscape, in which white water competes with blustery clouds in depicting elemental force (both illustrated below). He also painted about 30 dramatic seascapes. As one would expect, not one has a calm sea or a clear sky! He was, too, a most gifted draughtsman, capable of creating subtle variations in tone. Some of his drawings were clearly preparatory studies, but he also produced a number of finished works in this medium, noted above all for their delicate handling of trees and water.

xxxxxA contemporary landscape painter who, early on, was influenced by Ruisdael, was the Dutchman Aelbert Cuyp (1620-91). He is particularly noted for his town and river scenes, and for his paintings of animals, especially cows. His later works are often bathed in a soft glow of evening sunlight, the influence of the French artist Claude Lorrain. Among his masterpieces are View of Dordrecht, Ubbergen Castle, and Cattle with Horseman and Peasants, all in the National Gallery, London. A popular painter in England, he was also known for his seascapes and the occasional portrait and still-life. 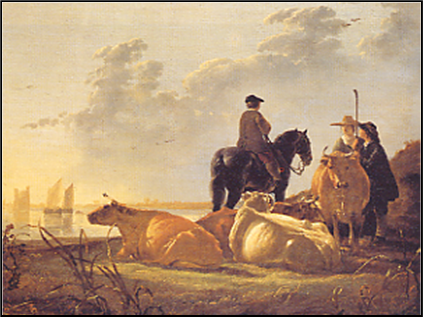 xxxxxA contemporary landscape painter whose early work, by its close study of nature, shows the influence of Ruisdael, was the Dutchman Aelbert Cuyp (1620-91). His reputation rests mainly upon his town and river views, his broad landscapes, and his paintings of animals, especially cows, but he was also known for his seascapes and the occasional portrait and still-life.

xxxxxHe was born in Dordrecht and, like Ruisdael, owes much of his training to relatives - his father, the portrait painter Jacob Cuyp, and his step-uncle Benjamin Cuyp. However, his talent soon became apparent and he quickly surpassed them in accomplishment. His later landscapes are bathed in a soft, golden glow of evening sunlight - the influence via fellow artists of the French landscape painter Claude Lorrain. This soft luminosity engenders a warm feeling of serenity and peace of mind - a sense of tranquillity not to be found in the works of his fellow countryman Ruisdael! Illustrated above is Peasants and Cattle by the River Merwede, painted around 1650.

xxxxxCuyp never travelled abroad, but the richness of his more mature work brought him recognition far beyond his native Holland. He was particularly popular in England, where most of his works are to be found. Among his masterpieces are View of Dordrecht, Riders with the Boy and Herdsman, and Ubbergen Castle (illustrated below), all in the National Gallery, London, and the Piper with Cows, now in the Louvre. Also illustrated below are Boats in a Storm and Rooster and Hens.

xxxxxBut not all his work was of this nature. He painted tavern scenes of the utmost propriety - such as The Skittle Players in the National Gallery, London, - and he painted landscapes, portraits and both historical and religious works. His gift of colour and composition can best be seen, perhaps, in his busy, warm-hearted tableaux depicting festive events, such as The Feast of St. Nicholas, The Twelfth Night, The Wedding Feast and Celebrating the Birth (illustrated left above). In these, like his contemporary the French playwright Molière, he sees and portrays the humour often implicit in human behaviour. One of his comic works is The Cat's Dancing Lesson, and among his best-known paintings are Young Woman at Her Toilette and The Dancing Couple, both illustrated above.

xxxxxAn able and prolific artist, - some 800 of his paintings have survived - it is generally considered that only the Dutch artists Rembrandt and Hals deserve to rank above him in the art of genre painting. Inxthe depiction of peasant low life he was not alone. Adriaen Brouwer (1605-1638) and his tutor, Adriaen van Ostade (1610-1685) produced many works on the same theme and, together with Steen, were often known as the "Little Masters of Holland". 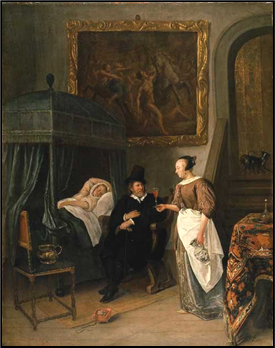 xxxxxAnother Dutch artist of note at this time was Jan Steen (1626-1679). He is best known for his genre paintings, many of them centred around the low life pleasures of the peasant, or the folly and gluttony of the common but more well-to-do family. He was born in Leiden, educated at the University there, and in 1648 was one of the founding members of the town's Guild of St. Luke. He studied first in Haarlem under Adriaen van Ostade, and then in The Hague with Jan van Goyen, whose daughter he married in 1649. He moved to Delft in 1654 and then settled in Haarlem in 1661.

xxxxxHis father was a brewer and he himself, on returning to Leiden in 1670, opened a tavern there. It is hardly surprising, therefore, that many of his paintings depict bawdy, drunken scenes, be it in a tavern or a brothel. These and his other, more conventional tableaux of everyday life are observed with remarkable skill and sensitivity. In them he vividly portrays facial expressions and mannerisms of the assembled company, together with the disorder in which most ordinary families tended to live. Indeed, the expression "a Steen household" has come to mean one that is chaotic and slovenly! In these works, he gently chides and moralises by the use of a variety of symbols or clues, the meaning of which were well-known in his day. The Doctor's Visit (illustrated) is a good example, where the "illness" of the young girl languishing in bed is clearly related to the subject of the painting above her head depicting a pagan revelry!

xxxxxAnother prominent Dutch artist at this time was Jan Steen (1626-79). He is famous for his genre paintings, many depicting the low life pleasures of the peasant, or the folly of the more well-to-do family. His bawdy, drunken scenes, (he owned a tavern in Leiden), and his more conventional paintings of family life are observed with remarkable skill and sensitivity. A number contain symbols or clues, there to make a moral point on the subject illustrated. He also painted landscapes, portraits and both historical and religious works. His gift of colour and composition is best seen in his scenes like The Feast of St. Nicholas, The Twelfth Night and The Christening Feast. One of his comic works is The Cat’s Dancing Lesson, and among his best-known paintings are Young Woman at Her Toilette and The Drawing Lesson. It is generally considered that, as a genre artist, he is only surpassed by the Dutch masters Rembrandt and Hals.

xxxxxHis friend and most brilliant pupil was Meindert Hobbema (W3 1689), but he also had an influence on a number of 19th century artists, including Constable and the Norwich School in England, the Barbizon School in France, and a leading Norwegian artist, Johann Christian Clausen.

xxxxxIncidentally, his Le Coup de Soleil, showing a burst of sunlight breaking through the clouds and illuminating the river valley below, was used as a motif on porcelain made at the famous Sèvres factory in about 1836.