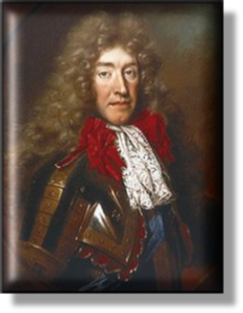 xxxxxAs Duke of York (the second son of Charles I) James was forced into exile at the end of the English Civil War, but returned to England when his brother was restored to the throne. He served as lord high admiral, taking part in the Anglo-Dutch Wars, and helping to improve the organisation and efficiency of the navy. An avowed Roman Catholic since 1671, he became king of Great Britain on the death of his brother, meeting only limited opposition, in spite of his religious beliefs.

xxxxxAs we have seen, during the reign of Charles II, opposition to a Roman Catholic monarch had been clearly demonstrated and acted upon. The uncovering of the Popish Plot - allegedly designed to put James on the throne - deeply alarmed the Protestant community, and was followed by the proposed Exclusion Bill, specifically designed to ban the Duke of York from the succession. When this failed, there followed the Rye House Plot of 1683, an unsuccessful attempt to kill both Charles II - a Roman Catholic at heart - and his brother James, his rightful heir. 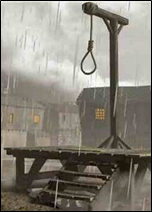 xxxxxIt was against this background that James II came to the throne in February 1685. He had hardly had time to sit on it before he was confronted by the Monmouth Rebellion. James Scott, the Duke of Monmouth, an illegitimate son of Charles II, having landed at Lyme Regis on the south coast, moved inland with a force of some 4,000 men and, capturing Taunton in the June, was proclaimed King of England. Fortunately for James II, his army remained loyal to him as the rightful heir, and Monmouth's ragged force was soundly beaten. Severe "justice" was then meted out to the rebels by the infamous Judge Jeffreys via what came to be known as the "Bloody Assizes". Monmouth was beheaded - as was the Earl of Argyll who had led an unsuccessful rising in Scotland - and over one thousand of his supporters were either hanged or transported into slavery.

xxxxxThe relatively easy defeat of the usurper Monmouth gave the king a false sense of security, and he thus failed to appreciate the strength of Protestant opinion in England. In fact, the heavy-handed reprisals against Monmouth and his protestant supporters infuriated the majority of his subjects. And their anger was increased the more in November of that year when James dismissed Parliament and began to use his revenue to raise a standing army. Many Tories joined with the Whigs in opposition to the king. Furthermore, having promised to defend the Church of England, in 1687 James issued his Declaration of Indulgence which, by granting freedom of worship to all religions, enabled him to appoint Catholics to high office. Catholics joined his privy council, assumed command of the army and navy, and took up top appointments in the Universities.

xxxxxSuch actions were viewed with alarm by the Protestants, and matters came to a head in May 1688 when, having reissued his Declaration of Indulgence, James II ordered that it be read out in churches throughout the land. This dictate proved highly unpopular, and the Archbishop of Canterbury and six of his bishops petitioned the king to withdraw the order. They were taken to court on a charge of seditious libel, but were acquitted amid widespread rejoicing. Meanwhile the birth of a son to the kin 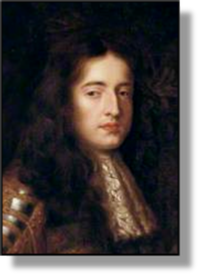 g threatened the continuation of a Catholic monarchy, and added to the need for urgent action. Secret plans were set in motion to dethrone the king. Seven leading Englishmen invited the Dutch and Protestant William of Orange (illustrated), husband of James II's daughter Mary, to invade England and seize the crown. He landed at Brixham in Devon in November and, meeting no opposition, arrived in London the following month. In the meantime, James II, deserted by his army, was allowed to escape to France, where he vowed to return to regain his throne. As we shall see, he did return in 1689 (W3), but his cause was lost. The “Glorious Revolution”, achieved without a shot being fired, was here to stay and was to prove a major step towards constitutional monarchy.

xxxxxIncidentally, when the birth of the royal prince was announced, a rumour went the rounds that the baby was not James's and had been smuggled into the Queen's bedroom in a warming pan! ...... The invitation to William to "invade" England was delivered personally by Admiral William Herbert. In order to keep this matter secret he went dressed as a common seaman. ...... Before departing for the continent, James II made a will, witnessed, among others, by the diarist Samuel Pepys, then serving as first lord and secretary of the Admiralty.