xxxxxThe Duke of Monmouth, an illegitimate son of Charles II, was a Protestant and seen as heir to the throne by those who opposed the succession of the king’s brother, the Roman Catholic Duke of York. Indeed in 1679 the Whigs tried to rule out the Duke of York by their Exclusion Bill, and in 1683 (C2) the Rye House Plot attempted to kill both the king and his brother. When the duke, as James II, eventually came to the throne in 1685, Monmouth landed in Dorset from the continent, but he received only limited and untrained support. He took Taunton, where he was proclaimed king, and then, confronted by the royalist army in a marshy area known as Sedgemoor, decided on a night attack. It failed. His small cavalry force deserted him, his foot soldiers became bogged down and were quickly overpowered, and Monmouth himself was captured. He was beheaded a few days later. The Monmouth Rebellion was over. 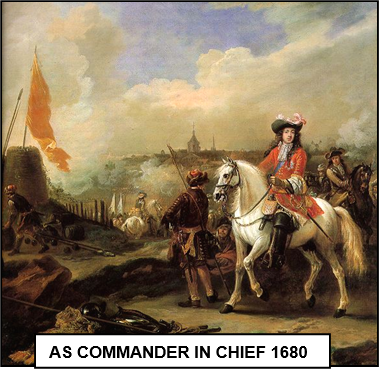 xxxxxJames Scott, the Duke of Monmouth, (also called James Fitzroy and James Crofts), was the illegitimate son of Charles II and Lucy Walter. He was born in Rotterdam and spent his early life on the continent, not coming to England until 1662. When he did so, the king acknowledged him as his son and made him the Duke of Monmouth. He married the countess of Buccleuch the following year, and it was then that he adopted her surname of Scott. He served his father well, first as captain of the king's troop and then, from 1678, as captain general of the armed forces.

xxxxxAs a Protestant and a son of the king - albeit by one of his mistresses - it was almost inevitable that he should become embroiled in the burning issue of the succession. Charles had no legitimate heir, so his Roman Catholic brother James, Duke of York, was next in line to the throne. As we have seen, following the so-called Popish Plot of 1678 (C2) - allegedly aimed at killing the king and replacing him by his brother - the Whigs, led by the Earl of Shaftsbury, felt obliged to take action. In 1679 they brought in the Exclusion Bill in a bold effort to deny the Duke of York his rightful inheritance, and put Monmouth in his place. The Lords would have none of it, and the attempt failed, but there then followed the Rye House Plot of 1683 (C2), a Whig plan to kill Charles II and, more to the point, his Roman Catholic brother, the heir to the throne. When this failed, Monmouth - clearly implicated in the conspiracy - felt it wise to take refuge in Holland. 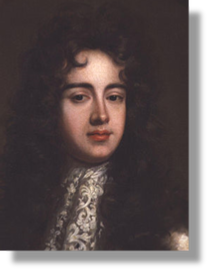 xxxxxWhen James eventually came to the throne in February 1685, Monmouth (illustrated) made another and, as it proved, final attempt, to seize the crown - the so-called Monmouth Rebellion. Aware of the opposition in England to a Roman Catholic monarch, he landed with 82 followers at Lyme Regis in the southern county of Dorset in June of that year and raised his standard. In the next few days some 4,000 men came to his support, but they were mainly peasant farmers and tradesmen. Few of the nobility were willing to risk their necks. He succeeded in capturing Axeminster and then Taunton - where he was proclaimed king of England -, but he failed to take Bristol and was forced to fall back on Bridgwater. The following month, learning that a royalist force was encamped on a marshy area known as Sedgemoor, just three miles south-east of the town, he decided on a daring night attack. It might possibly have proved successful had his small cavalry contingent not deserted the field, and his foot soldiers had managed to cross a flooded ditch. As it was, once alerted, the royalist forces, led by the Earl of Feversham and the up-and-coming General John Churchill (later the Duke of Marlborough), quickly defeated the untrained rebels. Monmouth tried to escape disguised as a shepherd, but he was captured along with many of his supporters, and beheaded a few days later. Meanwhile a revolt in Scotland was also crushed, and its leader, the Earl of Argyll, put to death.

xxxxxIncidentally, the English writer Daniel Defoe took an active part in the rebellion and managed to escape after the Battle of Sedgemoor - the last battle to be fought on English soil. However, his contemporary, the poet laureate John Dryden, supported the king. His satires Absalom and Achitophel and The Medal, written a few years earlier, poured scorn on Shaftsbury and his Whigs for attempting to replace the king by an illegitimate son of Charles II . ......

xxxxx......  A story goes that after the Duke of Monmouth was beheaded, his head was sewn back on so that his portrait could be painted! 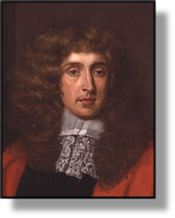 xxxxxThe man charged with conducting the trials of those accused of complicity in the rebellion was Judge Jeffreys, lord chief justice of England. He had already earned a reputation for his ruthless regard for the law, and for the severity of his sentences - not to mention his corruption - when he had presided over the trial of the conspirators in the Rye House Plot of 1683. Assisted by four other judges, he now conducted a series of trials in the west country which, by the nature of the punishment meted out, came to be known as the "Bloody Assizes". Monmouth was beheaded, over 300 of his supporters were hanged, and a further 800 were sold into slavery in Barbados. Many others were imprisoned or flogged, and one woman, Alice Lisle, accused of sheltering a number of the rebels, was condemned to be burnt at the stake.

xxxxxGeorge Jeffreys (c1644-89) was born at Acton in Denbighshire, Wales, the son of a country gentleman. After studying law at Cambridge University and the Inner Temple, London, he was called to the bar in 1668. An eloquent speaker and a spiteful master at cross-examination, he soon won favour with Charles II. He assisted the king in his business affairs and, after a brief spell as chief justice of Chester, was made lord chief justice of England in 1683. His ruthless and unjust conduct in criminal cases - made more widely known in the aftermath of the Rye House Plot - earned him the title of "The Hanging Judge", and he became a feared and hated man, particularly among the Whigs.

xxxxxOn the accession of James II he continued his loyalty towards the crown, and was made Baron Jeffreys of Wem. After the bloody assizes, he was appointed Lord Chancellor and in this office he defended the king's pro-Catholic policies and attempted to maintain his royal authority. When James was forced to flee the country in December 1688, Jeffreys also tried to make his escape, disguised as a seaman. He was recognized and arrested in a tavern in Wapping, however, and imprisoned in the Tower of London. He died there in April the following year.

xxxxxThe extremely harsh punishment meted out to Monmouth and his Protestant supporters via the Bloody Assizes did nothing to endear the new king to the vast majority of his people. Furthermore, the victory of the royalist forces gave James the impression that his throne was relatively secure. As we s 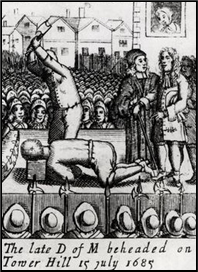 hall see, nothing was further from the truth.

xxxxxIncidentally, the executioner who beheaded the Duke of Monmouth was an Englishman (or possibly an Irishman) called Jack (John) Ketch (died 1686). He was renowned for his appalling lack of skill. It is said, for example, that it took three blows to behead Lord Russell - following the Rye House Plot of 1683 - and that he wielded at least five strokes of the axe before decapitating Monmouth! So well-known did he become, that for more than two centuries after his death his name was used as a common nickname for an executioner.

xxxxxThe lord chief justice of England, Judge Jeffreys (c1644-1689), conducted the trials of those accused of complicity in the Monmouth Rebellion. He had already earned a reputation for his ruthlessness at the trial of the conspirators in the Rye House Plot of 1683. Now, assisted by four other judges, he conducted a series of trials which, by the harshness of their sentences, came to be known as the “Bloody Assizes”. Monmouth was beheaded, over 300 were hanged, and 800 were sold into slavery. Many others were imprisoned or flogged, and one woman was burnt at the stake. Such extreme punishment did nothing for the king’s popularity. When James fled the country in 1688, Jeffreys, known as “The Hanging Judge” also tried to escape, but he was caught, imprisoned in the Tower, and died there the following year.