Charles of Lorraine: engraving by the Dutch printmaker Jacob Gole (c1660-c1737), 1687, after a portrait by the Dutch painter Willem Wissing (1656-1687) – Fitzwilliam Museum, University of Cambridge, England. Parthenon Before: date and photographer unknown – replica of the original Parthenon in Athens, built in Nashville, Tennessee, in 1897. Parthenon After: by the English artist G.F. Sargent (active 1840-1860), published in Greece: Pictorial, Descriptive and Historical, 1853.

xxxxxAs we have seen, the defeat of the Ottoman Turks at the Battle of Kahlenberg in 1683 (C2) led to a counter offensive. The Austrians defeated the Turks at the Second Battle of Mohacs in 1687, and the Venetians, taking advantage of the situation, invaded Greece and bombarded and captured Athens. In the taking of city, however, the Temple of Athena Parthenos (The Parthenon), a magnificent example of Doric architecture dating back to the 5th century BC, was almost completely destroyed. 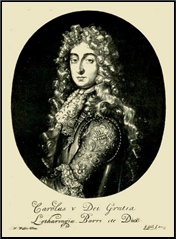 xxxxxAs we have seen, the failure of the Ottoman Turks to take the city of Vienna following their defeat at the Battle of Kahlenberg in 1683 (C2), opened the way for a counter offensive. The Holy League was formed between Austria, Poland and Venice (and supported by Russia) with the aim of recapturing areas of eastern and central Europe. Overxthe next four years, Charles of Lorraine (1643-1690), the Austrian field marshal who had taken a major role in the defence of Vienna (illustrated), drove the Turks out of most of Hungary, and in August 1687 sealed his success with a resounding victory at the Second Battle of Mohacs. His triumph ensured the Habsburg succession to the Hungarian throne. Ten years later, as we shall see, following the Battle of Zenta in 1697 (W3), the Turks were finally expelled from Hungary, a situation which was confirmed by the Treaty of Karlowitz two years later.

xxxxxIn the meantime, the Venetians, heartened by the obvious downturn in Ottoman fortunes, and encouraged by the pope, set out to re-conquer its naval bases along the Adriatic coast and in Morea, the southern part of mainland Greece. By so doing, they hoped to regain some of their former naval and commercial power in the eastern Mediterranean. (This enviable position had been seriously undermined when the Ottoman Turks, having overthrown the Byzantine Empire in 1452, had advanced further into Greece, capturing the city of Athens and the Morea peninsula.) In 1687, therefore, led by their brilliant commander-in-chief Francesco Morosini, and with the help of German mercenaries, the Venetians invaded Greece. Within the year they had captured Corinth and Athens, driven the Turks out of Morea, and taken over a number of important Aegean islands. 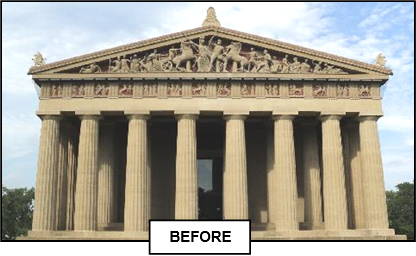 xxxxxSadly, the Venetian attack on Athens, involving as it did the bombardment of the city, resulted in the almost complete destruction of the magnificent Temple of Athena Parthenos (The Parthenon), which had been completed on the Acropolis (a raised citadel) in 438 BC. Dedicated to Athena, the warrior maiden, it was a perfect example of Doric architecture, and a masterpiece of Greek design and sculpture.

xxxxxEarlier, after the Turks had captured Athens in 1458, the Parthenon, then housing the Church of St. Mary, was soon converted into a mosque, and a minaret was erected in the south west corner. Later, however, it was used to store a gunpowder magazine and this proved fatal. When the Venetians arrived to capture the city in 1687, the Parthenon and other temples on the Acropolis were much in their original form, but when the 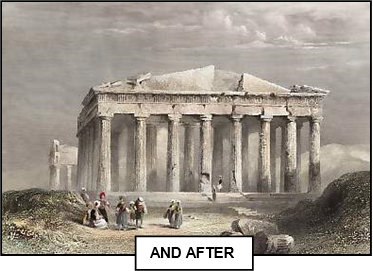 bombardment of the city began - the guns firing from the Hill of the Muses - the magazine in the Parthenon received a direct hit. The explosion that followed totally destroyed the centre of the temple and damaged many of the surrounding buildings. We are told that commander Morosini was so pleased with the result that he decided to take a piece of the ruined temple back to Venice to prove how accurate his gunners had been. However, in attempting to salvage a section of the west pediment - that showing Athena's horses - the demolition work proved too difficult, and the sculptural masterpiece crashed to the ground and broke into many pieces.

xxxxxAs it so happened, the success achieved by Venice in their invasion of Greece proved of little real value. Indeed, so expensive did it become to maintain some of this newly-acquired territory, that in 1718 the Morea peninsula was returned to the Turks. And Athens, the capture of which had brought about the virtual destruction of one of antiquity's finest achievements, was back in the hands of the Turks the following year. As we shall see, with an eye to making a quick dollar, they later made a lucrative business out of selling pieces of what remained of the Parthenon to wealthy antiquarians, including the British diplomat Lord Elgin of "marbles" fame. By 1812 (G3c), he had taken his entire collection back to England.

xxxxxThe Parthenon, a perfect example of Doric architecture, was built on the Acropolis, the raised city in Athens, in 438 BC. Dedicated to Athena, the warrior maiden, and known as the Temple of Athena Parthenos, it was a masterpiece of Greek design and sculpture. When the Turks captured Athens in 1458, the Church of St. Mary which it housed was converted into a mosque and a minaret erected in one corner. However, by the time the Venetians invaded Greece and attacked the city in 1687, the building was being used as a gunpowder store. Receiving a direct hit from the Venetian artillery, the ancient temple was almost completely destroyed. Beyond hope of repair, when the Turks returned to the city the following year they saw no use for it and, later, began to sell off pieces of the ruins as souvenirs. As we shall see, one willing buyer was to be the British diplomat the Earl of Elgin. In 1802 he began shipping out what came to be known as the Elgin Marbles and by 1812 (G3c) had taken his entire collection to England.