xxxxxThe Englishman Isaac Newton, one of the greatest mathematicians and scientists of all time, made three major discoveries in the mid-1660s - he invented differential calculus, discovered the law of universal gravity, and made important advances in the study of light. This research led to the publication of one of his greatest works, the Principia. This work, which would not have been published in 1687 without the insistence of his friend, the astronomer Halley, revealed the laws of celestial motion and gravity, and gave meaning to the ideas of force and mass. And among many other contributions was his research into the properties of light, during which he constructed the first reflecting telescope. Unfortunately, many of his findings were not published, and, being a man who resented criticism, this led to a number of unpleasant disputes with fellow scientists. He had long standing feuds, for example, with the German mathematician Gottfried Leibniz, and the English scientist Robert Hooke. But such quarrels must not detract from the value of his research across such a wide field of scientific endeavour. He pulled together the work of Galileo, Copernicus and Kepler, and formed a theory of the universe that began to make sense. Nor, as we shall see, was his contribution at an end. In 1704 (AN) he published his second major work, Opticks. 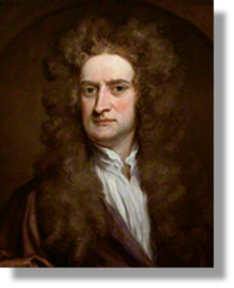 xxxxxThe Englishman Isaac Newton, one of the greatest mathematicians and scientists of all time, was born in a small manor house at Woolsthorpe, near Grantham in Lincolnshire. He had an unsettled, troubled childhood. His mother remarried when he was two, and he was then separated from her for some nine years, being brought up by his grandmother. In these circumstances he developed an acute sense of insecurity and, as a lonely intellectual, came to react violently against the slightest hint of criticism. Indeed, at one time during his career his genius verged on a state of mental disorder. For some six years, starting around 1678, he virtually withdrew from intellectual society, immersing himself in religious controversy, denying the doctrine of the Trinity, and dabbling in the occult. He eventually returned to his studies, but for many years his findings were confined to his notebook or circulated to only a small circle of interested parties. This in no way detracted from the enormous value of his achievements, but the delayed publication of his findings did involve him in a number of unpleasant controversies. 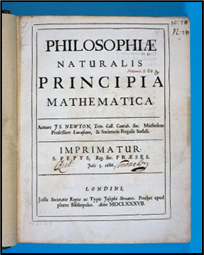 xxxxxHe went to study at Trinity College, Cambridge in 1661, and there he showed a particular interest in the works of the French mathematician René Descartes and the Irish physicist Robert Boyle. So soon did he reveal his extraordinary talent, that he was appointed a professor of mathematics there at the age of twenty-six. In 1665, in order to avoid the plague then raging in the university town, he went back to his home in Woolsthorpe, and it was here that earlier research culminated in three major discoveries. In the space of two years, he not only invented differential calculus, but also discovered the law of universal gravity, and made important advances in the study of light. This research eventually led to the publication of one of his greatest works, the Principia, containing, among other matters, the three standard laws of motion, and his consequent findings on gravitation.

xxxxxNewton's first major achievement was in the field of mathematics. In 1666 he developed what he termed his "notation of Fluxions”, known today as the calculus (meaning "pebble" in Latin). Unfortunately he did not publish his findings on returning to Cambridge - fearing that they might be criticised - and this later led to a very bitter and long-running controversy with Gottfried Leibniz. The German mathematician did not arrive at the same conclusion until 1675, but he made public his method under the name of "differential calculus" in 1684. Newton insisted that he alone had invented this method, and appointed a committee of his 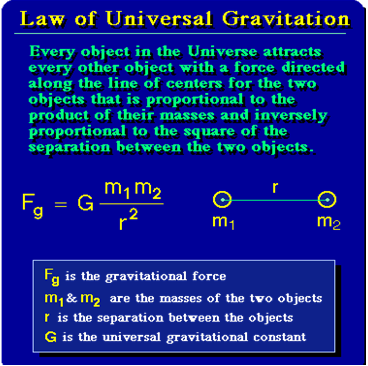 own supporters to prove his case! In addition, as president of the Royal Society he used his position to publish a condemnation of Leibniz, openly accusing him of deliberate plagiarism. This unedifying wrangling - in which Newton was particularly spiteful - rumbled on for some 25 years. In the event, it was Leibniz's terminology that was eventually used. In fact, Newton did not publish any detailed explanation of his fluxional method until 1704.

xxxxxIf legend is to be believed, then Newton began to delve into the phenomenon of gravitation in 1665, when he saw an apple fall from a tree while sitting in the orchard of his family home. If an apple were attracted or pulled to the earth by some hidden force, then could this be the same force that kept the moon orbiting the earth, and the planets orbiting the sun? It was by applying this theory of gravity that he later calculated the orbit of the moon, and gave credence to the laws of planetary motion which had been reached earlier by the German astronomer Johannes Kepler during his close observation of the planets. His findings were partially contained in his tract On the Motion of Bodies in Orbit, written in 1684, and expanded and more fully explained in his Principia. 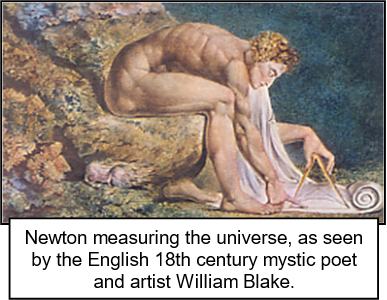 xxxxxThe Principia, a work in three parts, must be regarded as one of the most important scientific books ever published, a revolutionary work which proved the basis for future advances in physics, astronomy and engineering. It is somewhat alarming to note, therefore, that such an epoch- making work would not have seen the light of day had it not been for the support and persistence of Newton's friend, the astronomer Edmund Halley. He it was who eventually persuaded Newton to place some of his findings before the Royal Society, and then met the cost of the Principia's publication in 1687. In this outstanding work Newton equated space with geometry and thus revealed the laws of celestial motion and gravity (from the Latin word gravitas meaning "weight"). In it he explained the motions of the planets and the movement of the Earth's tides, pulled by the moon's attraction. And by his pioneer work in mechanics - the study of forces and bodies in motion - he gave meaning to the ideas of force and mass.

xxxxxOnce in print, however, the book involved Newton in yet another lengthy and bitter dispute, this time with the English scientist Robert Hooke, who claimed that he had been the first to discover the inverse square law of gravitation, and that Newton had stolen it from him. Such was depth of Newton's anger towards Hooke - who earlier had scornfully dismissed some of his findings on light and colour - that in future revisions of his work he struck out any reference to him, and refused to publish his Opticks or accept the presidency of the Royal Society until after Hooke's death.

xxxxxWhatever the rights and wrongs of this matter, it was clearly Newton who pulled together the work of Galileo, Copernicus and Kepler and formed a scientific theory which began to make sense. But this was only one of the many contributions made by this remarkable man. As early as 1663, for example, he had discovered the binomial theorem, and five years later his research into the properties of light led him to construct the first reflecting telescope, produced to overcome the distortions then associated with the use of a glass lens. He made a second version in 1671 and, on presenting it to the Royal Society, was admitted to the society that year.

xxxxxIn these early years Newton took only a small part in public life. In 1687, however, when James II was busy appointing Roman Catholics to places of high office, he was a member of a delegation which tried to dissuade the king from interfering in the administration of universities. And two years later he became a member of parliament, representing Cambridge University. As we shall see, in his later years he tended to move away from scientific research, settling in London and finding a new outlet for his

xxxxxBut even then his life was not without controversy. Quite apart from his continuing battle of words with Leibniz, he became involved in a running and bitter dispute with the astronomer John Flamsteed. And, as we shall see, it was during this period, in 1704 (AN), that he published his second major work, his Opticks, a treatise containing important advances as to the properties of light and colour.

xxxxxIncidentally, Newton’s law of universal gravity stated that “every body attracts every other with a force directly proportional to the product of their masses and inversely proportional to the square of the distance between them.” This law enabled him to predict all of the planetary motions, the tides, and the movements of the moon and the comets.