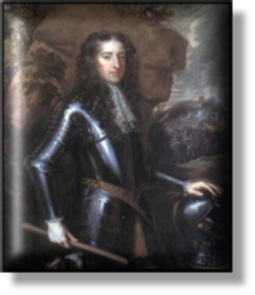 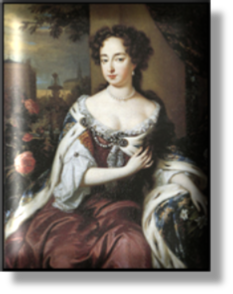 xxxxxAs we have seen, the autocratic rule and pro-Catholic policy adopted by James II proved widely unpopular. When the birth of a son and heir made possible the continuation of a Catholic monarchy, seven eminent Englishmen invited the Dutch and Protestant leader William of Orange to invade England and seize the throne. In November 1688 he landed at Brixham, Devon, with a force of some 15,000 men and, meeting no opposition, made for London, where he was warmly received. Meanwhile, James II, deserted by his army, escaped to France, determined to return and regain his throne.

xxxxxIn fact, Mary, the elder, Protestant daughter of James II, was the true successor to the throne, but her husband was also descended from the Stuarts. He was the son of William II of Orange and Mary, the eldest daughter of Charles I. It had previously been agreed that if ever Mary came to the throne she and her husband would rule jointly. Thus it was not until 1694, when Mary died, that William ruled alone. 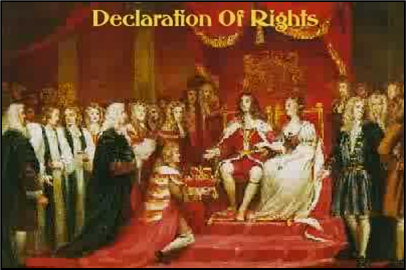 xxxxxThe Glorious Revolution, as it came to be known, was a bloodless overthrow of the Roman Catholic James II. England was a Protestant country once more. Above all, however, it was a triumph for parliamentary supremacy. Though a people's democracy was still a long way off, the era of parliamentary government and constitutional monarchy had begun. Mary and William had been invited to take the throne by a parliament opposed to a ruler who had broken the original contract between King and People. They could hardly claim, therefore, that they possessed a God-given right to govern. The doctrine of the Divine Right of Kings might well be well established across the channel, where Louis XIV of France ruled with absolute authority, but in England the monarch was now to be strictly subjected to th 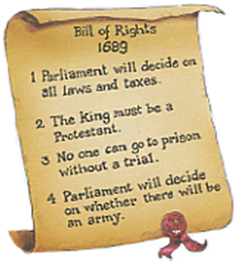 e rule of law. Indeed, both monarchs accepted their office with strings attached. By the Bill of Rights which offered them the English throne, the true, ancient and indisputable rights of the people of this realm were clearly spelled out. Parliament was given the power to make laws, levy taxes and raise an army, and the rights of the individual were safeguarded. Furthermore, William and Mary were obliged to agree that neither they nor any future ruler of the country could be a Roman Catholic or marry one, a stipulation later confirmed by the Act of Settlement in 1701. At the same time, The Toleration Act granted freedom of worship to Protestant dissenters, but no concessions were granted to the Roman Catholics, either religious or political.

xxxxxWilliam's first task was to consolidate his hold on his new kingdom. This took him to Ireland, where James II had landed and was laying siege to Londonderry. Having failed to take the city James moved his troops to Drogheda, and it was near there in July 1690 that the two armies met. In the ensuing Battle of the Boyne, the Catholic forces, including some 7,000 French infantry, were soundly defeated and James made his escape to France, never to return. At the same time, a revolt in Scotland inflicted a heavy defeat upon the royalist forces at Killiecrankie in July 1689, but its leader, Viscount Dundee, was killed in the battle and the movement lost its impetus. In the following month the rebellion was crushed at the Battle of Dunkeld.

xxxxxWilliam was born in the Netherlands, son of William II of Orange. A skilful soldier and diplomat, in 1672 he was appointed chief magistrate (stadtholder) and captain-general, with the specific task of holding back a French invasion. This he achieved the following year by opening up the dikes around Amsterdam. Then, with the aid of allies, he managed to regain his country's lost land and bring France to a peace settlement at Nijmegen in 1678. After accepting the English throne in 1688 and making his new realm secure, he lost no time in returning to the continent to continue what had become his life's work - the fight to save Holland from the territorial ambitions of Louis XIV. There he assisted in the formation of the Grand Alliance, a coalition of nations which proved powerful enough to keep Holland intact. For the next eight years he waged war in Flanders and played no small part in bringing about the Treaty of Ryswick in 1697. This settlement won him favourable terms. He was allowed to garrison key fortresses in the Spanish Netherlands, and Louis XIV was obliged to recognise him as king of Great Britain and Ireland, and to agree not to support any plot designed to overthrow him.

xxxxxIn the meantime, the European conflict between the English and the French gave rise to a colonial war on the other side of the Atlantic. Known as King William's War (just to identify it from three others that followed!) it proved a long and bloody affair. Here France held part of Canada (called "New France") and the English possessed a chain of colonies stretching along the north-east coast of North America. The major incident was an abortive attempt by the English to capture the French stronghold of Quebec. The land force failed to reach beyond Montreal, and a naval attack via the St. Lawrence River suffered casualties and found Quebec too well defended. The war came to a temporary halt by the Treaty of Ryswick in 1697.

xxxxxWilliam and Mary were not particularly popular in England, but their reign was extremely important for its constitutional implications. No longer was there to be a constant wrangling between monarch and parliament as to who had the right to govern. Of course, there was to be the occasional clash of interest between the monarch and the representatives of his people, but emphasis from now on was to be on the form that parliamentary representation was to take - a question that was to be many years in the political melting pot. As a person, William was reserved and somewhat cold in manner, and, as an ardent Dutchman, he had no real affection for England. But politically his reign was a valuable one, and notable above all for the long struggle that emerged due to the territorial ambitions of a man who, unlike William, had no curb to his authority – the absolute monarch of France, Louis XIV. As we shall see (AN), this saga still had some way to run.

xxxxxIncidentally, William died of lung cancer soon after a riding accident in which his horse stumbled on a molehill and threw him to the ground. The supporters of James II and his successors - the Jacobites - would often drink a toast to the health of the “gentleman in the black velvet waistcoat" - the mole over whose hill William’s horse had stumbled! 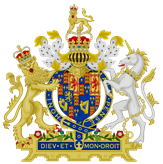