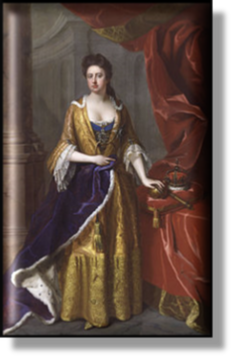 xxxxxAnne, the second daughter of King James II and the last sovereign of the Stuart line, became Queen of Great Britain and Ireland in 1702, following the death of William III. Although her father was a Roman Catholic, Anne was brought up in the Protestant faith. Indeed, such was her devotion to the Anglican Church, that she openly supported the Glorious Revolution of 1688, which exiled her father and brought to the throne her Protestant sister Mary and her husband, William of Orange. She married Prince George of Denmark in 1683, and bore him a large number of children. Sadly only one survived infancy - William, Duke of Gloucester - and he died at the age of eleven.

xxxxxHer reign was dominated by the War of the Spanish Succession, in which her outstanding general, John Churchill, won a series of major battles against the French - Blenheim, Ramillies, Oudenaarde and 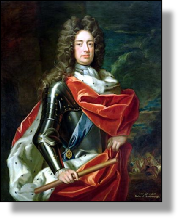 Malplaquet - all in the space of five years. She may well share some of the credit for these victories since, as a close friend of Churchill’s domineering wife, Sarah, she had been instrumental in restoring her husband to favour - disgraced in the previous reign -, appointing him captain-general of the army and making him Duke of Marlborough (illustrated). But this said, Churchill and his wife exerted a great influence over the queen during the early years of her reign. She had known Sarah from childhood and was for long dominated by her forceful personality. It was mainly on account of this friendship that she supported the Whigs, who favoured the war, and excluded the Tories from office.

xxxxxA woman of somewhat limited intelligence, she left the general conduct of the war to her ministers. And it was the Lord Treasurer, the Earl of Godolphin, for example, who successfully negotiated the Act of Union which joined together the kingdoms of England and Scotland. However, despite her love of gossip and amusement, she was not without a mind of her own. She was the last English monarch to preside over cabinet meetings, and the last to veto (refuse to sign) a parliamentary bill. And in choosing to bring about a union with Scotland in 1707, and in favouring the making of peace with France in 1710, she chose the best courses of action. She had, too, a genuine love for her people, and was generally popular.

xxxxxIt was In 1707, convinced that the Whigs were prolonging the war for their own interest, that she fell out with her lifelong confidante Sarah, and turned to the friendship of other women, notably Abigail Masham. As a result, in 1710 she took up the Tory cause and, dismissing the Earl of Godolphin, instituted a Tory government bent on bringing the war to a speedy conclusion. Her change of heart was completed the following year with the dismissal of her one-time hero, the Duke of Marlborough. He was stripped of all his appointments and, being accused of embezzling public funds, was obliged to go into exile, accompanied by his wife. They did not return until after Anne’s death. 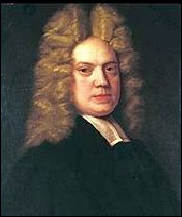 xxxxxThe victory of the Tories in 1710 - it should be noted - was due in part to a fanatical English preacher named Henry Sacheverell (c1674-1724). An ardent Tory supporter, in November 1709, in a sermon delivered to the lord mayor and aldermen of London, he launched a blistering attack upon the Whigs’ conduct of the war. Unwisely, Godolphin had him tried for sedition, and this led to rioting in his support by a populace which had grown weary of the European conflict. The Tories made him into a martyr and swept to victory. Sacheverell served his sentence - he was suspended from preaching for three years - and was then given a comfortable living in London by the Queen herself.

xxxxxIn English literature, the reign of Queen Anne is often referred to as the Augustan Age because of its unusual number of talented men-of-letters. These included the essayists, Joseph Addison and Richard Steele, the poets Alexander Pope and John Gay, and the novelists Daniel Defoe and Jonathan Swift. The playwright John Vanbrugh also gained fame as the architect of Blenheim Palace, the nation’s gift to Marlborough.

xxxxxAnne’s last years, in particular, were dogged with ill-health, and she became so fat that a hoist was required, it is said, to lift her into her coach. A number of Tories, led by Viscount Bolingbroke, began to lay plans for the restoration of the Jacobites in the person of James III, son of James II and brother to the Queen, but her sudden death in London in August 1714 put an end to their schemes. The Act of Settlement, passed in 1701 to ensure that the throne would pass to the Protestant house of Hanover should Anne have no children, was swiftly put into effect, and she was succeeded by her cousin George, the elector of Hanover, as King George I of Great Britain and Ireland.

xxxxxIncidentally, over a period of sixteen years, Anne gave birth to no less than seventeen children. Not one survived beyond the age of eleven. A number were still-born and it is now believed that this was because she was suffering from what is commonly called “sticky blood”, a condition which is cured today by simply taking aspirin.

was among the first to improve the quality of English racehorses by importing Barb and Arab sires. His famous stallion, Godolphin Barb, was owned by his son, the second earl of Godolphin. Newmarket was the favourite venue for horseracing at this time (established in 1634 by Charles I), but it was during this reign, in 1711, that Queen Anne opened the course on Ascot Heath, now well known for the Royal Ascot meeting in June and its principal race, the Ascot Gold Cup.