xxxxxThe battle was fought in 1708, some 18 miles south-west of Ghent, near the town of Oudenaarde on the River Scheldt. The allied army, commanded by Marlborough and Eugene, had marched 50 miles in 65 hours and, having crossed the Scheldt, took the French by surprise. The fighting raged all afternoon, but turned in the allies’ favour when both French flanks were attacked simultaneously, one by a surprise manoeuvre. Both gave way, and the French infantry then made their escape across the river, suffering heavy losses. The Duke of Vendôme rallied his army the next day, and repulsed the allies at Ghent, but six months later this town and Bruges were captured, and the French were driven out of the Low Countries. 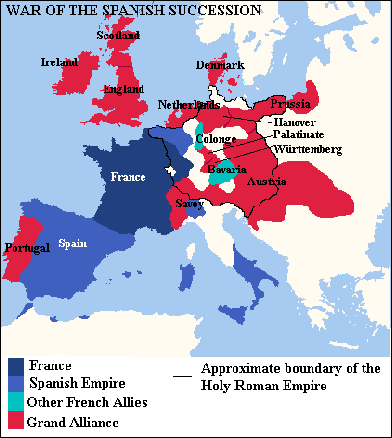 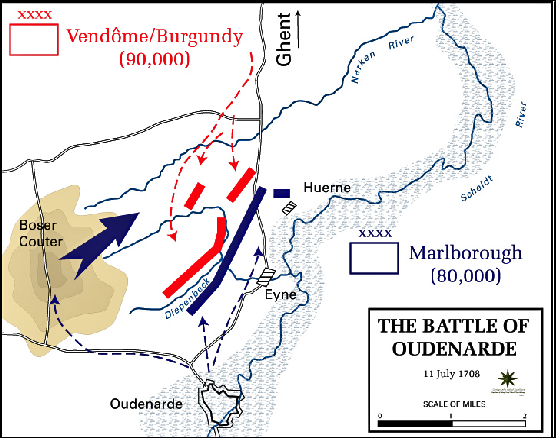 xxxxxThe battle, fought in July 1708, took place north of Oudenaarde, a town situated on the River Scheldt about 18 miles south-west of Ghent in today's Belgium. The Allied army, under the joint command of Marlborough and Eugene, was about 80,000 strong. The French force, led by the Dukes of Vendôme and Bourgogne, was slightly larger in size, but the Allies gained the advantage of surprise. They had marched 50 miles in 65 hours and, having crossed the Scheldt, suddenly fell upon the French, then making ready to lay siege to Oudenaarde. So unprepared were the French that Bourgogne was all for retreating without delay, but Vendôme eventually persuaded him to stand his ground.

xxxxxThe fighting raged all afternoon with neither side giving way, but, unknown to the French, Marlborough (illustrated) had sent a Dutch force on a wide detour to the west. Once in position, it launched a surprise attack upon the French right flank at the same time as Eugene led an assault on the left. Assailed from both sides, many of the French infantry crossed the river and made their escape. By nightfall they had lost some 6,000 men, killed or wounded, and around 9,000 captured. Casualties on the allied side amounted to about 4,000.

xxxxxDespite their defeat, Vendôme rallied his army the next day, and managed to repulse the allies at Ghent. However, this town, together with Bruges, was eventually recaptured by Marlborough six months later, and the French were finally driven out of the Low Countries.