xxxxxAs we have seen, following the Battle of Zenta of 1697 (W3), in which the Ottoman Turks were defeated by the Austrians, the Treaty of Karlowitz of 1699 made Austria the dominant power in eastern Europe. One country taken over by the Austrians was Hungary, and their harsh rule there provoked a major rebellion in 1703, led by the aristocrat Ferenc Rakoczi II. At first, the rebels met with success, at one time threatening Vienna itself, but in 1708 they suffered a major defeat at Trencin, and a settlement was reached three years later. Religious freedom was granted, and the Hungarians gained a measure of autonomy. This brought about an uneasy period of peace, but, as we shall see, a new war of liberation broke out in 1848 (Va), and this was to lead to the Dual Monarchy of Austria-Hungary in 1867.

xxxxxAs we have seen, the Battle of Zenta of 1697 (W3), in which the Ottoman Turks were defeated by the Austrians, was followed two years later, 1699, by the Treaty of Karlowitz. By this settlement Austria became the dominant power in eastern Europe, gaining much land in the Balkans and virtually completing its occupation of Hungary. 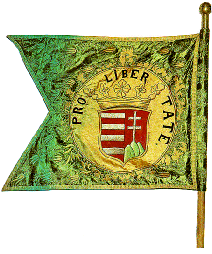 xxxxxAustrian rule in these territories proved extremely harsh and, in the case of Hungary, led to further attempts by the people to overthrow their Habsburg masters. These early uprisings were quickly crushed, but in 1703, the Hungarian aristocrat Ferenc Rakoczi II, taking full advantage of Austria’s involvement in the War of the Spanish Succession, organised a much more formidable rebellion. Having received some support from the French, he set up a provisional government, and for some five years proved a serious threat, pinning down a large number of Austrian troops, and at one time threatening an attack upon Vienna itself.

xxxxxInx1708 his troops finally suffered a major defeat at Trencin, but armed resistance continued until April 1711, forcing the Austrians to the negotiating table. Withxthe death of Emperor Leopold I that month, and the succession of his brother, Charles VI, a settlement was reached by the Peace of Szatmar. The new emperor, anxious to bring an end to the conflict, agreed to a compromise. The rule of the Habsburgs was confirmed, but the treaty granted their Hungarian subjects a general amnesty, religious 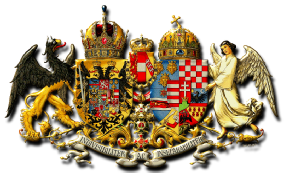 freedom, and a number of political concessions. Having gained a measure of autonomy, relations between master and subject improved somewhat, and there followed a period of uneasy peace. In the second half of the century, however, there was a revival of nationalism. As we shall see, this eventually led to the outbreak of a new war of Liberation in 1848 (Va) (Europe’s Year of Revolution), and finally culminated in the Dual Monarchy of Austria-Hungary in 1867.

xxxxxFerenc Rakoczi II (1676-1735), like his father, was a fervent patriot, determined to overthrow the Austrians, his country’s new masters. When the War of the Spanish Succession broke out in 1701, he sought help from France, but he was betrayed and imprisoned. He escaped and, after two years in Poland, returned to Hungary in 1703. It was then that he led a widespread rebellion, forming a national government and taking on the Austrian army. Some success was achieved, and in 1711 a settlement gave the Hungarians religious freedom and some political concessions. In the meantime the Transylvanians had asked for his help to gain their independence, and this meant he could not stay in Hungary. He left before the rebellion ended, and eventually settled in Turkey. 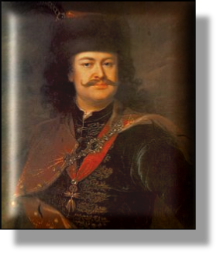 was born into an aristocratic Magyar (Hungarian) family. Both his father and stepfather had led revolts against the Habsburgs in earlier times and, like them, he was to become a fervent patriot. Following the Battle of Mohacs in 1687 - when the Austrians first occupied parts of Hungary - he was separated from his mother, and sent to be educated in a Jesuit college in Bohemia. He returned to his family’s estates in 1694, and when the War of the Spanish Succession was about to start, was quickly persuaded to take up his country's cause for freedom. He sought help from Austria's rival, Louis XIV, but he was betrayed and thrown into prison, only avoiding death by making his escape.

fter spending two years in Poland, he returned to Hungary in 1703. With Austria deeply involved in war, the time was now ripe for a widespread insurrection. It was then that he put himself at the head of a peasant revolt, formed a national government, and took on the Austrian army. As we have seen, despite setbacks, the armed rebellion (sometimes known as the Kuruc rising) continued until 1711, when - given the circumstances - the insurgents gained a favourable compromise. In the meantime, the Transylvanians, themselves looking for a leader who would restore their independence, had elected Rakoczi their prince in July 1704. This dashed any hopes of his personally reaching an agreement with Leopold I, and he left his country in February 1711, just two months before peace was made. He never returned. He spent some time in Poland and France, and then in 1717 settled in Turkey, where he spent the remainder of his life in exile.

xxxxxIncidentally, the Rakoczi March, by the Hungarian composer Franz Liszt, was based on a popular patriotic tune of the 18th century - composer unknown. He made a number of arrangements of the melody, including his Hungarian Rhapsody No.15, produced in 1853. Today, it is Hungary’s unofficial anthem, and is often played on state occasions.