xxxxxIn 1696 (W3) the Englishman Thomas Savery became the first man to assemble a crude, unreliable steam engine. The age of steam did not really take off, however, until his partner, Thomas Newcomen, made the first practical “fire engine” in 1712. If Savery was the first to conceive the power of steam, Newcomen was the first to harness it. He employed such an engine to pump out water from a local mine, and it was soon being used for this purpose throughout the country. And by 1755 it was being exported to North America. These engines were expensive to manufacture and run, but later the English engineer John Smeaton greatly improved its efficiency, and, as we shall see, the Scottish inventor James Watt made major improvements to its design in 1775 and 1782 (G3a).

Diagram: by courtesy of Carl Lira – one of Newcomen’s early engines, dated around 1725, can be seen in Newcomen’s Engine House, Dartmouth, Devon. 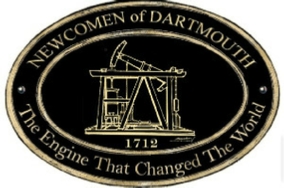 xxxxxIt was in 1696 (W3) that the Englishman Thomas Savery became the first man to manufacture a somewhat crude and unreliable steam engine, but it was not until 1712, with the making of Newcomen's practical "fire engine" that the age of steam can really be said to have taken off. As we have seen, Newcomen worked alongside Savery for a number of years and entered into partnership with him in 1698. It was these years of trial and error that finally enabled him to make a reliable model, capable of pumping water out of mines. If Savery was the first man to conceive the power of steam, then Newcomen was the first man to harness it successfully. 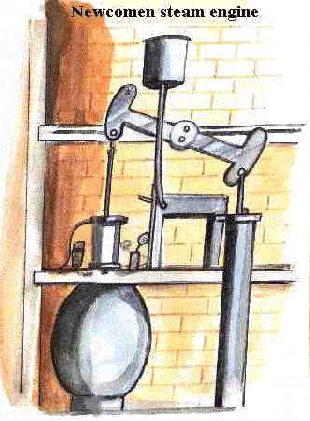 xxxxxThomas Newcomen was born in Dartmouth, Devon, and it was here that he set up a blacksmith's shop. Havingxworked with Savery over a number of years, it was in 1705 that, assisted by a plumber named John Calley, (died 1725), he improved the basic idea of the steam engine by using a vacuum to drive the piston. From this followed his prototype, erected near Dudley Castle, Staffordshire, in 1712. It worked, and he was soon using the engine to pump water from a local coal mine. In a short time the engine was being employed as a pump in mining districts throughout the country, both in existing collieries and in new mines that otherwise would have been unworkable. Indeed, so successful was the engine, that by 1755 it was being exported to North America. However, Newcomen's attempt to patent his invention failed because of an earlier patent taken out by Savery for a machine that would raise water "by the impellent force of fire". Indeed, Newcomen had to build his own engines under that license, and he was obliged to pay royalties to Savery.

xxxxxThese early engines were highly expensive to manufacture, mainly because the cylinder was made of brass. In addition, because fresh steam had to be raised for each stroke of the piston, it consumed a vast amount of coal - over ten tons a day in some cases - and consumption went higher when the brass cylinder was replaced with one made of iron. The only consolation at this juncture was that, for the most part, the engines were being used in mines where there was a plentiful supply of coal. However, several years later the English engineer John Smeaton almost doubled the efficiency of the engine and, as we shall see, in 1775 and 1782 (G3a) the Scottish engineer James Watt made major improvements to its design. The Industrial Revolution was on its way. 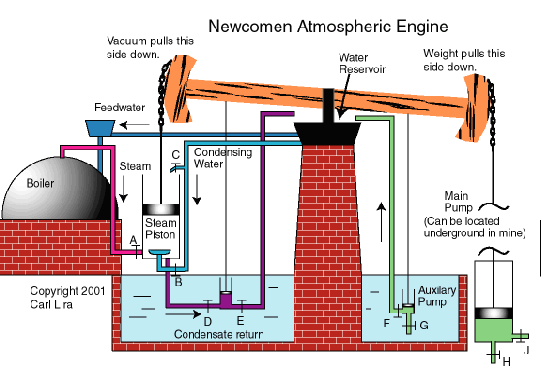