xxxxxJohn Vanbrugh staged his first play, The Relapse, in 1696, and The Provok’d Wife a year later. As Restoration comedies they proved highly successful, as did a subsequent string of farces based on French plays, but at the turn of the century he suddenly revealed an extraordinary talent as an architect. His plans for Castle Howard in Yorkshire, combining English baroque with the refined style of Versailles, were extremely well received, and earned him the task of planning and building Blenheim Palace for the Duke of Marlborough. Work was begun in 1705 and took 20 troubled years to complete. Its monumental grandeur was not admired by all, there were problems over mounting costs, and the Duchess was constantly wanting changes. Vanbrugh was eventually dismissed. In his other works, including a number of smaller but nonetheless imposing houses throughout the country, he sometimes made plans in collaboration with Christopher Wren, and he was often assisted on site by the able Nicholas Hawksmoor. 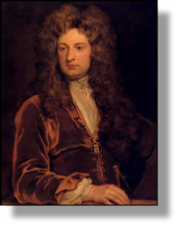 xxxxxJohn Vanbrugh’s family was of Flemish origin. He was baptised in London, but his father was a sugar baker in Chester and it was here, it would seem, that he attended school. In 1686 he joined the army as an infantry officer, and while visiting Calais four years later, was arrested by the French on suspicion of being a spy. He was imprisoned in the Bastille in Paris, and it was in this unlikely setting that he began writing for the stage, sketching out the first draft of a comedy of manners. 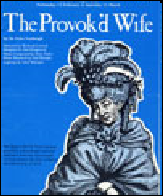 xxxxxAfter his release in 1692 he remained in the army, but began work on his first two plays, The Relapse, or Virtue in Danger, staged in 1696, and The Provok’d Wife, a year later. These were fine examples of Restoration comedy. They proved highly successful, though their portrayal of loose morals provoked a scathing attack upon the immorality of the theatre. A few years later he produced a number of farces based on French plays, Including The Country House and The Confederacy, but his first two works remained his most popular and best-known productions. 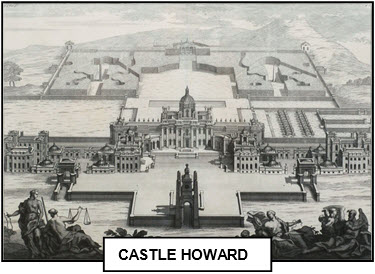 xxxxxHowever, despite his success as a playwright, at the turn of the century he began a new career. Having drawn up a building plan for Castle Howard, the country home of his friend the Earl of Carlisle, he was at once recognised as an architect of unique ability. Skilfully combining, as it did, the boldness of English baroque with the more refined French elements associated with Versailles, it won almost universal praise. Not surprisingly, this new-found talent quickly drew him away from his stage career. He now concentrated upon his work as an architect, and it is for his skill in that profession that he is best remembered today.

xxxxxIn the early years of his new career, be it noted, Vanbrugh was ably assisted by Nicholas Hawksmoor, the man who had earlier worked alongside Sir Christopher Wren. Together, and, later, separately, they designed on a grand scale, and were responsible for some of the most splendid baroque-style buildings in the country. After the designs for Castle Howard had been completed and work had begun, they embarked upon their most famous, ambitious and controversial project, the building of the magnificent Blenheim Palace. This was the nation’s gift to its great military commander the Duke of Marlborough, and it was named after the battle of 1704, the engagement in which he won his first victory over the French. 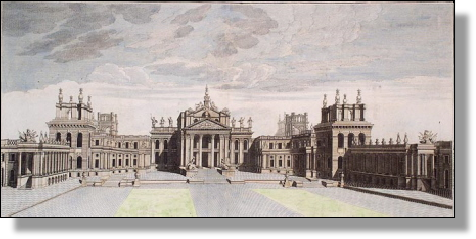 xxxxxThe work on Blenheim Palace was begun in 1705 on a site in Woodstock Park, near Oxford. Built to impress, its vast, baroque frontage is dominated by an imposing pillared entrance in the central block (the North Court), and four highly ornamented corner towers. The building was much praised, but it was not without its critics. Furthermore, it took over twenty years to complete, mainly due to the lack of money and a long series of disputes between Vanbrugh and the Duchess of Marlborough (the strong-willed Sarah Churchill) over cost and frequent changes in design. This on-going quarrel eventually led to Vanbrugh’s dismissal. The building was originally set in formal gardens, like those of Versailles. In the 1760s these were replaced by picturesque parkland, the work of “Capability” Brown, though formal parterres were restored on two sides of the palace in the nineteenth century.

xxxxxAmong other works, some of which were built in collaboration with Christopher Wren, Vanbrugh designed the Queen’s Theatre or Opera House in the Haymarket, London - technically a failure because of its poor acoustics - and a number of smaller but nonetheless imposing houses in different parts of the country. Worthy of special note is the redesigning of Kimbolton Castle in Huntingdonshire, and Vanbrugh Castle at Greenwich, his own “medieval” home just outside London. The outstanding works of his later years - in which the style is simpler but no less dramatic - are Eastbury in Dorset, Grimsthorpe Castle in Lincolnshire, and Seaton Delaval Hall in Northumberland.

xxxxxSuccess brought public office. He was appointed Controller of the Board of Works in 1702, and a director of Greenwich Hospital a year later. He was knighted by George I in 1714, and continued his work as Controller the following year.

xxxxxIncidentally, the Vanbrugh-Hawksmoor baroque style has often been described as “heavy”, for obvious reasons. An epitaph on Vanbrugh, written by the clergyman and poet Abel Evans (1679-1737) reads: Lie heavy on him, Earth! for he laid many heavy loads on thee. And the French satirist Voltaire, when he saw the style, commented: “What a great heap of stone without charm or taste”.

xxxxxThe English baroque architect Nicholas Hawksmoor (c1661-1736) began working for Christopher Wren at the age of 18. Following the Fire of London in 1666, he greatly assisted him in the building of many churches, including St. Paul’s Cathedral. He became chief architect for Westminster Abbey on the death of Wren in 1723. He collaborated with John Vanbrugh during the building of Castle Howard and Blenheim Palace, and was responsible for a number of grand country houses, and a variety of buildings at Oxford University. His style was powerful and dramatic, blending ancient Roman and Gothic architecture. 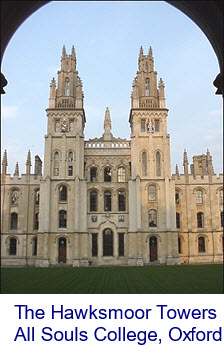 xxxxxThe English baroque architect Nicholas Hawksmoor (c1661-1736) began working for Christopher Wren at the age of 18, and he went on to collaborate with John Vanbrugh during the building of those two massive stately homes, Castle Howard and Blenheim Palace. Working in the shadow of these two famous builders, it might well be said that his original contribution to architecture at this time has not always received the recognition it deserves.

xxxxxAs far as is known, he was born at East Drayton in Nottinghamshire, and was first employed by Wren in 1679. He learned much from his master, and owed a great deal of his professional advancement to his support. As we have seen, following the Great Fire of London in 1666 (C2), he greatly assisted Wren in the rebuilding of a large number of city churches, including St. Paul's Cathedral, and he was his principal assistant during the work on Christ's Hospital.

xxxxxOn Wren's death in 1723s, he became the chief architect at Westminster Abbey, and it was while holding this office that work was started on his design for the west towers. Earlier work included a number of country houses, and various buildings at Oxford University. 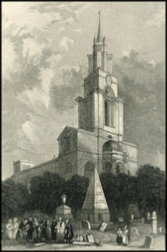 xxxxxBy 1711 his collaboration with Vanbrugh was clearly demonstrating his own concept of Baroque design, with its powerful, massive form creating an overwhelming sense of the dramatic. And it was in this year that he was appointed as one of the two surveyors assigned to the Commission for Fifty New Churches, all to be built in or around the cities of London and Westminster. In carrying out this task, he produced six churches on which he stamped his own grandiose, brooding style, characterised by a subtle blend of both ancient Roman and Gothic architecture. Most typical of this design are St. Anne's, Limehouse (illustrated), St. George-in-the-East, Christ Church in Spitalfields, and St. Mary Woolnoth in the City of London.

xxxxxThe Irish playwright George Farquhar (1678-1707) produced his first major work, The Recruiting Officer, in 1706, about the year Vanbrugh was abandoning his stage career. He wrote his other play of note the following year, The Beaux Stratagem, and both these showed a real flair for comedy, and a more than usual ability to write convincing dialogue. Earlier works, also noted for their wit and their humorous, romantic themes, were Love and a Bottle, The Constant Couple and The Twin Rivals. One of the last of the Restoration playwrights, his plays have often been revived over the years.

xxxxxIt was in 1706, when Vanbrugh was virtually abandoning his stage career, that the Irish playwright, George Farquhar (1678-1707) produced his first major work, The Recruiting Officer, centred around the continental war raging at the time. The following year he wrote his other play of note, The Beaux Stratagem, completing it, so we are told, on his death bed and dying during its first performance. These works not only showed a real flair for comedy, but they contained more realistic plots, and, by their dialogue, created a livelier study of character.

xxxxxHe was born in Londonderry, Ireland, the son of a clergyman. He attended Trinity College, Dublin, but spent most of his time as a would-be actor at the Smock Alley Theatre in the city. While taking part in a fencing scene in John Dryden's Indian Emperour, he badly wounded a fellow actor, and this accident put paid to his acting career. It was then that he went to London to try his hand at writing comedy.

xxxxxHis earlier plays, written over five years, included Love and a Bottle, The Constant Couple, Sir Harry Wildair and The Twin Rivals. They fell into the comic mould of the day, but they were well received for their ready wit and their romantic as well as humorous themes. But it was his last two works that made the greatest contribution to the English stage at the beginning of the 18th century.

xxxxxGenerally regarded as the last of the Restoration playwrights, Farquhar's plays have often been revived. The English stage and film actress Margaret Natalie Smith (known as Maggie Smith) played a part in The Beaux Stratagem when it was produced by the National Theatre in 1970.