xxxxxThe English nonconformist minister Isaac Watts published his first collection of hymns - Hymns and Spiritual Songs - in 1707. He wrote about 600 hymns in total, including O God Our Help in Ages Past and Jesus Shall Reign, and they were particularly popular in the American colonies. As a writer his best known works were his collection of religious poems Horae Lyricae, The Right Use of Reason in the Enquiry After Truth, and his Scripture History. 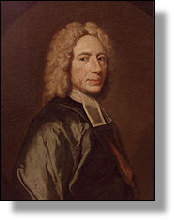 xxxxxThe English nonconformist minister Isaac Watts was born in Southampton. Regarded by many as the father of English hymn writing, he was educated at an academy for dissenters at Stoke Newington. In 1699, after serving as a tutor and preacher, he became assistant minister at Mark Lane Congregational Chapel in London, and was appointed pastor there three years later.

xxxxxIt was in 1707, while at Mark Lane, that he published his first collection of hymns under the title Hymns and Spiritual Songs. He wrote about 600 hymns in all, and these included some of the best known hymns in the English language, such as O God, Our Help in Ages Past, When I Survey the Wondrous Cross, and Jesus Shall Reign. His compositions were sung throughout the Protestant church, and were particularly popular in the American colonies. 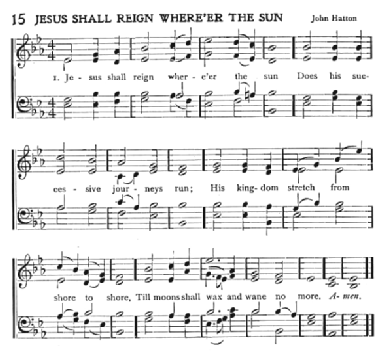 and astronomy. As a writer, he is best known for his Horae Lyricae, a collection of religious poems published in 1706, Logic, or the Right Use of Reason in the Enquiry After Truth, written in 1725, and used for many years as a textbook, and his Scripture History of 1732.

xxxxxHe was taken ill in 1712 and went to stay for a week at the home of Sir Thomas Abney in Hertfordshire. He ended up staying with the family for the rest of his life. He died at Stoke Newington, and was buried at Bunhill Fields, City Road, Islington, the resting place, among other dissenters, of John Bunyan, Daniel Defoe and William Blake.

xxxxxIncidentally, the word “hymn” is from the Greek word hymnos meaning a song of praise.