xxxxxAs we have seen, in 1711 when Charles of Austria inherited his father’s Empire, the Grand Alliance of nations, anxious to stop him inheriting the throne of Spain as well, quickly dropped him as their candidate in the War of the Spanish Succession and came to terms with Louis XIV of France. By the Treaty of Utrecht, agreed in 1713, France emerged with very few territorial losses and some gains in Canada and Flanders. The Spanish, however, lost some land in Europe as well as overseas territory, including Minorca and Gibraltar to the British. And their new king, Philip V, had to agree that the kingdoms of Spain and France would never be united. Austria continued its war with France and Spain but came to terms in 1714, gaining both the Spanish Netherlands and Sardinia. Britain emerged as a major land and sea power in Europe and also gained the Asiento from Spain, a monopoly in the lucrative slave trade. This balance of power was to remain in Europe until the War of the Austrian Succession in 1740 (G2).

xxxxxAs we have seen, feelers for a peace settlement to end the War of the Spanish Succession were put out by Louis XIV of France as early as 1708, following his defeat at the Battle of Oudenaarde. Early negotiations broke down however, mainly due to Louis' refusal to lay down his arms and then join forces with the allies in the fight against his grandson, Philip V of Spain.

xxxxxBut In 1711 fate took a hand and all was changed. With the death of Emperor Joseph of Austria and his succession by Charles VI, support for the war quickly evaporated. The Grand Alliance had supported Charles as the candidate for the Spanish throne, but its members now feared that if their efforts on his behalf were successful, Austria would emerge as the predominant power in Europe, not to mention parts of the New World. It was better to negotiate with Louis XIV. He had suffered a number of crushing defeats on the battlefield and was anxious to reach a peace settlement. The Grand Alliance was disbanded and each of its members - all with conflicting demands - were left to make their own peace. 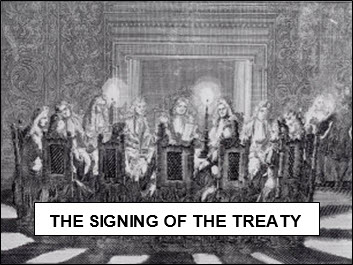 xxxxxThus the Treaty of Utrecht, begun in January 1712 and completed in 1713, was actually a series of agreements between France and Spain on the one hand, and Britain, Holland, Portugal, Savoy and Prussia on the other. Given the changed circumstances and - one must add - a late victory of the French over the Dutch at the Battle of Denain, France emerged from the settlement without significant territorial losses and, indeed, some gains. Louis ceded Newfoundland, Acadia (Nova Scotia), the Hudson Bay Territory and the island of St. Kitt to the British, but actually acquired a number of fortresses along the Canadian frontier and regained some border towns in Flanders. Prussia did acquire Neuchatel and Upper Gelderland but, in return, France received the principality of Orange. As for the Dutch, their major gain was the retention of certain barrier fortresses in the Spanish Netherlands.

xxxxxSpain, on the other hand, lost land in Europe as well as overseas. Philip V was, in fact recognised as the rightful king - thus founding the Spanish branch of the Bourbon dynasty -, but only on the firm understanding that the kingdoms of France and Spain would never be united. Furthermore, he was obliged to make a number of concessions. Britain gained Minorca and the vital peninsula of Gibraltar. The duchy of Savoy was granted Sicily, and Portugal obtained the colony of San Sacramento to the north of the river Plate in South America. By a later agreement, the Spanish Netherlands (Belgium), Naples, Milan and Sardinia were ceded to Austria.

might expect, Emperor Charles VI (illustrated), still upholding his claim to the Spanish throne, continued his war against France and Spain. However, following a number of French victories, he chose to make peace via the Treaty of Rastatt and Baden in 1714. By this settlement he received Breisach, Kehl and Freiburg east of the Rhine but ceded Strasbourg and Alsace to the French. He renounced his claim to the Spanish throne and, as we have seen, received the Spanish Netherlands, Naples, Milan and Sardinia. He would not recognise the Bourbon Philip V, however, and, technically, the two countries remained at war until 1720. (see map below) 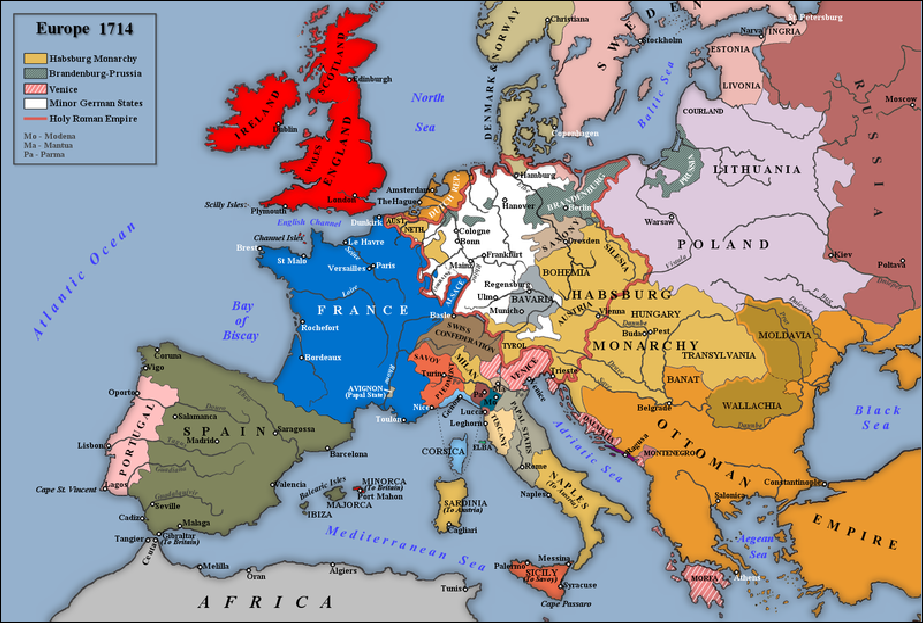 xxxxxThis new balance of power in Europe remained in operation until the War of the Austrian Succession, beginning in 1740 (G2). The most significant outcome of the Treaty of Utrecht was the emergence of Great Britain as a major power in Europe, and an important colonial, naval and commercial nation overseas. Furthermore, as we shall see, by this same treaty Britain gained the "Asiento", the exclusive right to conduct the slave trade with Spain's American colonies, a privilege by which the country hoped to enhance still further its growing prosperity from commercial enterprise.

xxxxxIncidentally, the French cleric Abbé de Saint-Pierre, who was secretary to the French delegation at the Treaty of Utrecht, was one of the first Europeans to put forward the idea of an international peace organisation. In his A Project for Setting an Everlasting Peace in Europe, published in 1713, he proposed a European peace settlement based on the Treaty and conducted by a permanent arbitration council. He later fell out of favour by criticising the rule of Louis XIV. ......

xxxxx...... In 1713 The German composer Georg Friedrich Handel, by now an international figure, composed his Utrecht Te Deum to celebrate the Treaty of Utrecht, and, in the same year, he won the favour of Queen Anne by his Ode for the Queen's Birthday. 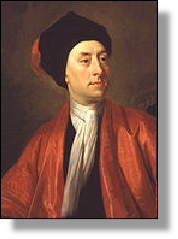 because the diplomat Matthew Prior (1664-1721) was closely associated with the negotiations (as he was for the Treaty of Ryswick in 1697). Prior, born in Wimborne Minster, Dorset, and educated at Westminster School and Cambridge, was also something of a poet. He wrote light occasional verse and some elegant love poetry. Many of his works were noted for their wit, such as On my Birthday, For my own Monument and Jinny the Just. Worthy of special note is his Alma or the Progress of the Mind, a humorous poem about the relationship between body and soul, written in imitation of Samuel Butler's burlesque poem Hudibras.

A map showing overseas territories held by European Powers in 1713 is given below. 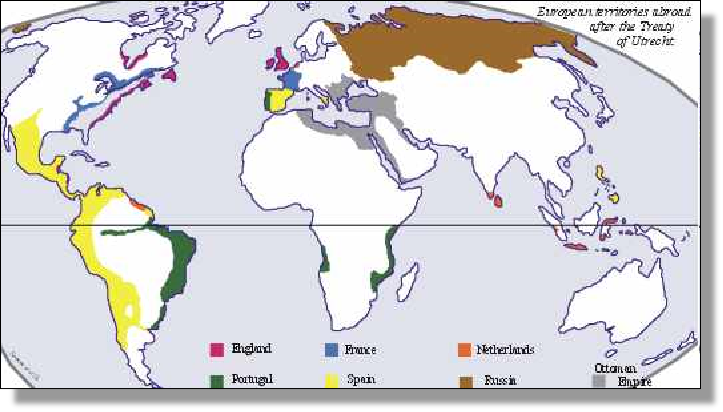