xxxxxThe Dutch physician and chemist Hermann Boerhaave spent much of his working life at Leiden. He made a special study of smallpox and the sweat glands, and was one of the first to discover that certain diseases were spread by contact. But he is remembered above all for his method of clinical teaching whereby he taught his students at the bedside of his patients. As a result, Leiden became recognised as a centre of medical excellence. His two major treatises were his Medical Principles of 1708 and his Aphorisms on the Diagnosis and Cure of Diseases a year later, and he also helped in editing the works of the physicians Vesalius and Harvey. As a chemist he wrote a textbook, Elements of Chemistry, in 1724. 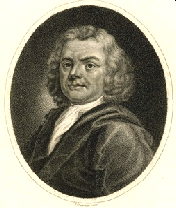 xxxxxThe Dutch physician and chemist Hermann Boerhaave was born at Voorhout, near Leiden, and trained for the ministry at the city's university. He gained a doctorate in philosophy in 1689, and a year later began to study medicine, botany and chemistry. He was awarded his medical degree from the University of Harderwijk in 1693, and then returned to Leiden, where he spent the remainder of his working life. He was appointed lecturer on the theory of medicine in 1701, and then professor of medicine and botany eight years later.

xxxxxHis own research included an examination of the sweat glands, their structure and function, and a more detailed study of smallpox. He was the first to discover that this highly contagious disease was spread by contact. But perhaps his major contribution to medicine, and one for which he is best remembered, was the reintroduction of clinical teaching. To provide practical as well as theoretical instruction, he founded a hospital in which he brought his students to the bedside of each patient so that they gained first hand knowledge of symptoms and their most effective cure. It was due in large part to his innovative teaching methods that Leiden became widely recognised as a centre of medical excellence. Students came from all over Europe to attend his lectures, watch his public dissections, and learn from his "bedside" approach. 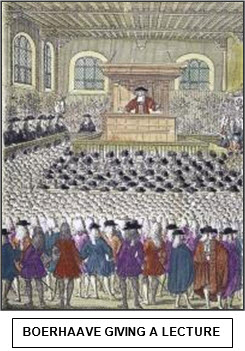 xxxxxTwo works in particular brought him fame and remained in general use for close on a century - his Medical Principles of 1708, and Aphorisms on the Diagnosis and Cure of Diseases, published a year later, and giving a brief summary of the medical knowledge of that time. Andxtogether with his fellow don, the German anatomist Bernard Albinus (1697-1770), he edited the works of the physicians Andreas Vesalius and William Harvey. Further into his career, in 1718, he became professor of chemistry and put his mind to making this subject more intelligible. In 1724, his Elements of Chemistry, written in a precise, clear style, became highly regarded as a basic textbook. His contributions in the field of botany included Index plantarum, compiled in 1710.

xxxxxBoerhaavexwas one-time pupil of the Scottish physician Archibald Pitcairne (1652-1713), whose medical writings, Dissertationes medicae, were published in 1701, and, according to some accounts, he numbered among his own students the Swiss scientist Albrecht von Haller.

xxxxxAs noted earlier, in the last year of his life Boerhaave completed a translation of the papers of his fellow countryman, the botanist Jan Swammerdam. Published in two volumes under the title Biblia Naturae (Book of Nature), this work revealed the value of Swammerdam’s research as a microscopist.

xxxxxIncidentally, the Royal Museum of the History of Natural and Exact Sciences at Leiden, known as the Boerhaave Museum in his honour, houses a fine collection of old scientific instruments, including microscopes which belonged to the Dutch microscopist Antoni van Leeuwenhoek, and thermometers once owned by the German physicist Daniel Fahrenheit. ……

xxxxx…… The medical condition Esophageal Rupture - a tear in the wall of the gullet due to violent vomiting - is also known as the Boerhaave’s Syndrome because it was first documented by Boerhaave in 1724.