xxxxxThe Battle of Malplaquet, one of the bloodiest conflicts of the War of the Spanish Succession, was fought near the town of Mons in 1709. The French tried to relieve this town, and camped close to the village of Malplaquet ten miles to the south. The Austrians under Eugene of Savoy attacked, but could not break through the French lines, but Marlborough sent in three English battalions and forced the enemy back. Heavy artillery and hand-to-hand fighting then broke out along the entire line, and casualties were heavy. Eventually the French centre and right flank fell back, and they left the field in good order. The French lost 12,000 men, and the Allies nearly twice that number. The Allies captured Mons the following month. 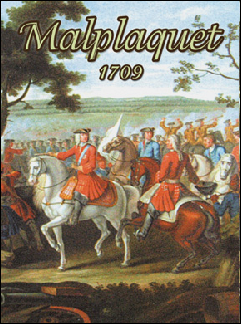 xxxxxThe Battle of Malplaquet was one of the bloodiest conflicts of the War of the Spanish Succession. This ferocious encounter took place near the town of Mons. The allies had begun to lay siege to this town in September 1709 when the French, under the command of the Duc de Villars, arrived to relieve the town and encamped around the village of Malplaquet, some ten miles to the south. The allies, again under the joint command of the Duke of Marlborough and Prince Eugene of Savoy, had no alternative but to engage in battle.

xxxxxAustrian contingents led by Eugene opened the attack, but proved unable to break through the French lines. Marlborough, commanding an Anglo-Dutch force, then committed three English battalions to the assault, and the enemy was forced back. At this stage, however, heavy fighting broke out along the entire front. Deadly artillery fire and repeated cavalry charges by the French, together with hand-to-hand infantry fighting, resulted in heavy casualties. The French made headway on their left flank, but, after a furious assault by Marlborough and Eugene, they were forced to give way in the centre and on the right. So depleted and weary were the forces of the allies, however, that they were unable to pursue the enemy off the battlefield. Of the 90,000 troops with which each side began the battle, the French lost about 12,000 and the allies over 22,000. It was after this conflict, Marlborough's last major battle of the war, that the Tories nicknamed him "the butcher".

xxxxxThe French, having left the area in good order, the Allies continued the siege of Mons and captured the town towards the end of October.

xxxxxIncidentally, the song Malbrouk s'en va-t-en guerre (Marlborough is off to the wars) is said to date from the Battle of Malplaquet, and might well have been sung to the tune "For he's a jolly good fellow". It became a favourite song of the French Queen Marie Antoinette in 1780, and the French dramatist Beaumarchais put it into his comedy Le Mariage de Figaro, published in 1784. The tune itself could have come from the Arabs at the time of the Crusades.