xxxxxJethro Tull, a qualified barrister whose interest lay in agriculture, developed a horse-drawn drill in 1701. It revolutionised the process of sowing by combining the three actions of drilling, sowing the seed and covering it with earth. Later, after a visit to France, he invented a horse-drawn hoe to uproot weeds and break up the soil. His ideas and thoughts on farming were contained in his New Horse-Hoeing Husbandry, published in 1731, and much expanded two years later. These innovations and new ideas marked the beginning of an agricultural revolution in England, continued, as we shall see in 1730 (G2) by the experiments of men like Charles Townshend, a politician-turned-farmer known as “Turnip Townshend”. 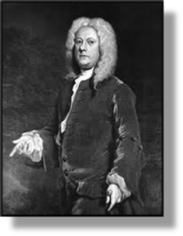 xxxxxJethro Tull was born in Basildon, Berkshire and, after studying at Oxford, qualified as a barrister. But he never practised law. His interest lay in agriculture, and in about 1700 he began work on his father's farm in Oxfordshire. Just a year later, in 1701, using pieces from an old pipe organ, he developed a horse-drawn drill which revolutionised the process of sowing, incorporating as it did the three hitherto separate actions of drilling, sowing, and covering the seed with earth. In addition, not only did it sow the seeds mechanically - avoiding the wasteful method of scattering by hand - but it also spaced out the seeds so that land between the rows could be cultivated in the growing period.

xxxxxThe drill itself was made up of a box so shaped as to release the seeds by a regulated amount; a hopper mounted alongside to supply the seed; and a plough and harrow to make a shallow furrow in the earth and then turn over the soil to cover the seeds as they were sown.

xxxxxLater, while travelling in France and Italy, he studied the various methods used in the cultivation of the vineyards. In 1714, following his return, he developed a horse-drawn hoe and used this to uproot weeds and keep the soil in a friable condition. 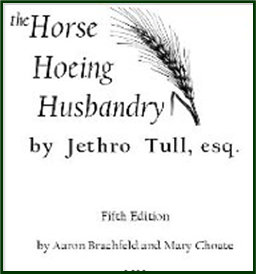 xxxxxThese inventions and his own ideas about farming were later contained in his chief work The New Horse-Hoeing Husbandry (also known as an Essay on the Principles of Tillage and Vegetation), published in 1731 and much expanded two years later. At first these innovations were violently rejected, but they were eventually taken up by the larger landowners and played an important part in introducing more efficient farming methods. As such, they marked the beginning of an Agricultural Revolution in England and elsewhere, hastened, as we shall see in 1730 (G2), by the experiments of men such as Charles Townshend, a politician-turned-farmer who came to be known as “Turnip Townshend”.

xxxxxIncidentally, a primitive "seed dropper" attached to a plough had been used in ancient Babylonia, and a similar but more intricate device was employed by the early Chinese. There are also references to a seed drill in Spain towards the end of the 16th century, but Tull's mechanical sower constituted an important advance. ……

xxxxx…… Onexof the biggest advances in agriculture came over a century later with the world’s first smooth-sided steel plough. Pioneered in 1837 by an American blacksmith named John Deere (1804-1886) in order to cut through the hard soil of the North American prairie land, within twenty years he was manufacturing more then 10,000 ploughs a year! Today his company is one of the largest manufacturers of farm-equipment in the world.