xxxxxAs we have seen, on coming to power in 1661(C2), Louis XIV of France embarked on a campaign of conquest. He gained part of the Spanish Netherlands at the Treaty of Aix-la-Chapelle in 1668, and by the Treaties of Nijmegen in 1678 and 1679 took over Franche-Comté from the Spanish and a string of fortified towns in Flanders. In 1686, in response to the revocation of the Edict of Nantes, the League of Augsburg was formed, including the Holy Roman Empire, Spain and Sweden, and in 1689 Britain and Holland joined and made up the Grand Alliance. Nevertheless the French won a series of victories in the Netherlands, Savoy and Spain, and only their defeat at the Battle of La Hogue in 1692 stopped a possible invasion of England. However, from then on Louis XIV’s fortunes began to wane. The defeat at sea, plus his failure to take Liège and the mounting cost of the war, brought him to the peace table. As we shall see, the Treaty of Ryswick in 1697 was not a very favourable settlement for the French.

THE WAR OF THE GRAND ALLIANCE  also known as

THE WAR OF THE LEAGUE OF AUGSBURG 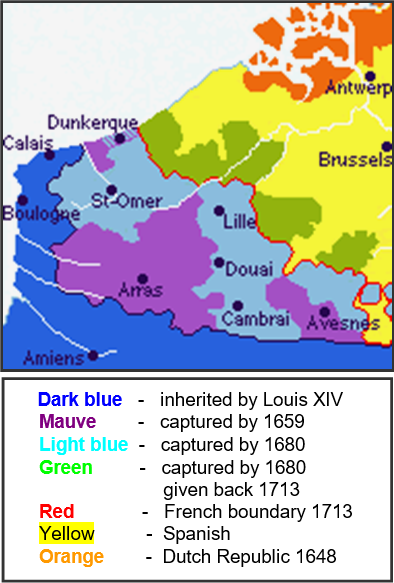 xxxxxAs we have seen, on coming to power in 1661(C2), Louis XIV of France was soon embarked upon a series of expansionist wars. In the War of Devolution, in which he claimed that, following the death of his father-in-law, Philip IV of Spain, the Spanish Netherlands were part of his rightful inheritance, he made some positive gains. Having seized the Spanish possession of Franche Comté he was confronted with a Triple Alliance made up of the three Protestant states of England, Holland and Sweden. By the Treaty of Aix-la-Chapelle of 1668 he was obliged to give up Franche Comté, but he nevertheless managed to hold on to a part of the Spanish Netherlands, including a number of vital frontier fortresses.

xxxxxHis next target was the Protestant republic of Holland, a barrier to his plans to expand northwards. In 1672 he launched a full scale invasion and was soon in possession of three of the seven provinces. But the opening of the dikes around Amsterdam put an end to the French advance, and by 1674 the Dutch, supported by Spain, the Holy Roman Emperor and the Elector of Brandenburg, had regained their lost territory. As a consequence, the French now switched their attack to the Spanish Netherlands. When the conflict finally came to an end, settled by the Treaties of Nijmegen of 1678 and 1679, the French had gained Franche Comté together with Artois and sixteen fortified towns in Flanders.

xxxxxThis blatant policy of aggression by Louis XIV, together with his revocation of the Edict of Nantes in 1685, stiffened the resolve of Protestant Europe. In 1686 the League of Augsburg was formed between the Holy Roman Empire, Spain, Sweden, the Palatinate and the electors of Saxony and Bavaria.

xxxxxUndeterred, in 1688 Louis invaded the Palatinate (in the Rhineland), bent on further gains in the north. This time, however, he saw the stakes as much higher. The Habsburg ruler of Spain, the frail and feeble-minded Charles II, was unable to produce heirs. When he eventually died the Spanish Empire would be up for grabs, and Bourbon France, by dint of marriage alliances, would be in a position to contest the succession with the Austrian Habsburgs, led by the Holy Roman Emperor Leopold I. Anticipating the death of Charles II, and anxious to put France into a commanding position when it happened, Louis went on the offensive, sure in the knowledge that the Austrians were still engaged with the Turks in the east and that his inveterate adversary, William of Orange, was in his new kingdom preparing to fight the Jacobites in Ireland. 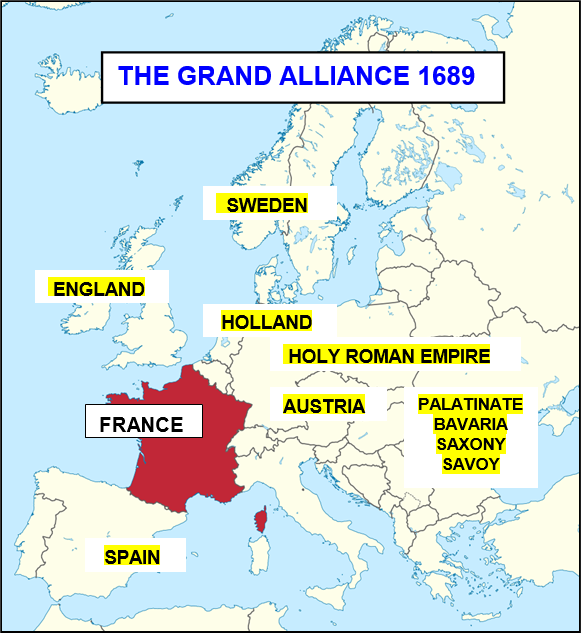 xxxxxThe French quickly conquered and devastated the Palatinate, but in 1689 William of Orange, now William III, brought both Britain and Holland into the League of Augsburg, and formed what came to be known as The Grand Alliance. Despite this show of unified strength, the French won a series of victories in the Low Countries, including the battles of Steenkerke in 1692 and Neewinden a year later. They also defeated the duke of Savoy at Marsaglia in 1693 (in the Italian Piedmont), and alarmed the Spanish by invading Catalonia. In the same year, however, Louis XIV failed to take Liège and never took part in a battle after this. Furthermore at sea, despite an early victory over the Dutch and English at Beachy Head in 1690, the French fleet was almost totally destroyed at the Battle of La Hogue two years later (sometimes known as the Battle of Barfleur), thus putting an end to their plans to invade England.

xxxxxThis defeat, together with the constant demands of the land campaign upon his army and his purse, eventually brought Louis XIV to the negotiating table, and, as we shall see, the war was brought to an end by the Treaty of Ryswick in 1697. Despite their sustained effort and string of victories, it was not a favourable settlement for the French. The Sun King was still a force to be reckoned with, but the sun itself was beginning to set on French dominance in Europe, at least for the immediate future. The War of the Spanish Succession (AN 1702) was to see to that.

xxxxxIncidentally, in 1692 the French military engineer Sebastien de Vauban took the fortified town of Namur with comparative ease, but three years later it was recaptured by William III. Considered as one of the king's finest military achievements, the siege and taking of the fortress is described in vivid detail in the novel Tristram Shandy, published in nine volumes by the English writer Laurence Sterne over the years 1759 to 1767. And soon after the event, the English diplomat and poet Matthew Prior wrote his An English Ballad on the Taking of Namur, published in 1695. ……

xxxxx…… In 1694 William’s war against the French suffered a severe blow when in March of that year HMS Sussex sank with all hands during a storm in the Strait of Gibraltar. Apart from the loss of 560 lives, the warship was carrying some nine tons of gold, money being sent to the Duke of Savoy to gain his support in the war. In the early years of the 21st century a search was mounted to recover the bullion, estimated to have a current value of £2.5 billion and lying more than half a mile below the surface.

xxxxxWar in Europe brought conflict between the English and French in North America. Known as King William’s War, it began in 1690. The French, holding part of Canada known as “New France”, launched an attack upon the English colonies and caused heavy casualties. In response the English began a land and sea assault upon Quebec, but the army failed to reach the city and the naval force found it too well defended. After this the war degenerated into a series of border skirmishes until brought to an uneasy peace by the Treaty of Ryswick in 1697. As we shall see, the conflict (Queen Anne’s War) was resumed when the War of the Spanish Succession began in earnest in 1702 (AN). 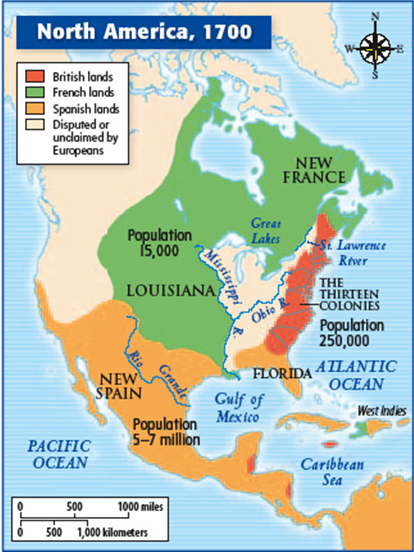 xxxxxA by-product of the war in Europe was a serious outbreak of hostilities between the English and the French in North America, known in England as King William's War. By this time three European powers had established firm settlements in the area. Spain held Florida, France laid claim to a vast central area called "New France", and England possessed a string of colonies stretching down the Atlantic seaboard from New England to the Carolinas. Beyond the range of mountains known as the Appalachians, however, lay a vast area of virtually unclaimed territory - as far, that is, as the Europeans were concerned. For them, there was still much to fight for in the New World.

xxxxxKing William's War (also known as the first of four French and Indian wars) began in earnest in 1690 when the Comte de Frontenac, the newly appointed governor of New France, arrived in the colony. In response to an earlier attack on the French settlement of Lachine by Iroquois Indians - fighting on behalf of the English - he launched a savage counteratta 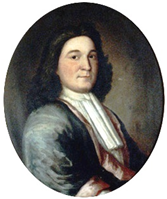 ck upon the English frontier. The English suffered heavy casualties, particularly during the attacks on Schenectady and the Salmon Falls, and, in retaliation, set out to capture the ultimate prize, the French city of Quebec. Axtwo pronged-attack was planned: a land army was to advance via Montreal, and a naval attack, commanded by Sir William Phips (illustrated) was to be launched via the Saint Lawrence River. But the strategy came to nought. The army failed to reach Montreal, let alone beyond, and by the time the fleet had arrived at Quebec, the city had been reinforced and was virtually impregnable. The New Englanders were obliged to withdraw with their tails between their legs. From then onwards the war deteriorated into a series of sporadic attacks upon isolated posts and settlements, and was brought to an uneasy end by the Peace of Ryswick in 1697.

xxxxxThis violent clash of interests marked the beginning of a series of armed conflicts between the English colonies and their rival Europeans. These cruel and bloody wars, often forming part of a larger conflict in Europe, and inevitably involving rival Indian tribes, raged for over seventy years, and did not come to an end until 1763 (G3a), when the Peace of Paris stripped France of its North American empire.

xxxxxIn the meantime however, as we shall see, the War of the Spanish Succession which began in earnest in 1702 (AN) found England at war with both France and Spain. Thus when the conflict was resumed in North America (known as Queen Anne's War) the English colonists found themselves at war on two fronts - the Spanish to the south and the French to the west and north. It was not an enviable situation to be in.

xxxxxIncidentally, after his naval career was over, Sir William Phips was appointed the first governor of the province of Massachusetts Bay. He arrived there at the height of the famous Salem Witch Hunt of 1692. He established a special court to conduct the trials, but, when matters got out of hand, he suspended the trials and, in May 1693, released the remaining prisoners (including his own wife!).