xxxxxThe German-born artist Gottfried Kneller, who came to England in 1674, painted some 6,000 portraits. He was court painter to no less than five monarchs, from Charles II to George I. He is well known for his series of Hampton Court Beauties of 1694 (a sequel to Peter Lely’s Windsor Beauties), and for some imposing portraits, including a portrait of William III on horseback, produced in 1697, and ones of Louis XIV of France and Peter the Great of Russia. He was a competent artist, but in general he painted to flatter and impress and, as a result, his studio was always busy churning out portraits to please. But he was capable of producing penetrating character studies, as can be seen in his 42 portraits of the members of the Kit-Cat Club, painted between 1702 and 1717. After his death a number of home-spun artists came to prominence, including the Scotsman Allan Ramsay and the Englishmen Joshua Reynolds and Thomas Gainsborough. He was knighted in 1692 and made a baronet in 1715. 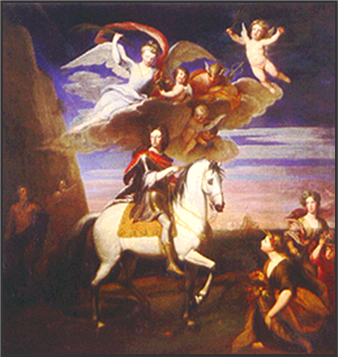 xxxxxIt is estimated that the German-born artist Gottfried Kneller painted close on 6,000 portraits. Coming to England in 1674 he was court painter to no less than five monarchs - Charles II, James II, William III, Anne and George I. He painted his portrait of William III on horseback in 1697 (illustrated). Among his well-known works are the series known as the Hampton Court Beauties of 1694 - a sequel to Peter Lely's Windsor Beauties - and some striking portraits, including those of Mr Banks, Mr Vernon, Sir Charles Cotterell, the Duchess of Portsmouth, Dr Burnet, Matthew Prior, and the Duke of Norfolk. He also worked for other European monarchs, and, among his royal commissions, painted portraits of Louis XIV of France and Peter the Great of Russia. A rival to the ageing Dutch-born artist Sir Peter Lely, he succeeded him as court painter in 1680.

xxxxxKneller was born in Lubeck, Germany, and after studying art in Amsterdam, Holland, he travelled to Italy and worked for some time in Rome and Venice. He came to England in 1674 and met with such success that he was soon working for the king and employing a large number of assistants in order to cope with his huge work-load. His busy studio became a meeting place for aspiring artists of the day, and in his later years he served as governor of the Academy of Painting and Drawing in London. He was knighted by William III in 1692, and made a baronet by George I in 1715, but he died without a legitimate heir so the baronetcy became extinct.

xxxxxHe was, needless to say, a most competent artist, but many of his portraits were purposefully designed to flatter the sitter and impress the viewer, as can be seen in the portrait of William III above. It is little wonder that his work was in such demand by members of the court, notable celebrities and the landed gentry. With the help of his assistants, he churned out a constant flow of portraits, often repeating the pose and selecting the garments from a set "wardrobe" of resplendent attire. The figure and background would be painted first and then the facial features inserted during a sitting or two! 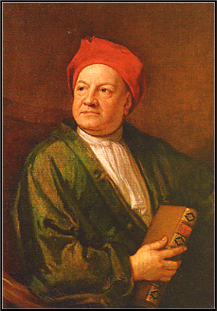 xxxxxItxmust be said, however, that some of his portraits were penetrating in their character study. Numbered among such works are the 42 half-length portraits of the members of the Kit-Cat Club, a well known literary association. Painted between 1702 and 1717, they are now in the National Portrait Gallery in London. Their unusual size came to be known as the "kitcat size" and this term is still in use today. Illustrated here is the portrait of Jacob Tonson, the then secretary of the Kit-Cat Club. Among the club’s members were Robert Walpole, Addison and Steele, Congreve and Sir John Vanbrugh.

xxxxxKneller’s monument, by the Flemish sculptor John Michael Rysbrack, is in Westminster Abbey. With him and before him, painting in England was dominated by foreign-born artists - such as Lely, Van Dyck and Rubens - but following his death in 1723 native artists came to the fore during the remainder of the 18th century, notably the Scotsman Allan Ramsay and the Englishmen Joshua Reynolds and Thomas Gainsborough.

xxxxxShown here (left to right) are four of his well-known works: Self Portrait, Queen Mary, The Duchess of Mazarin, and The Duke of Queensberry.

xxxxxAnother prolific portrait artist of this period was the French painter Hyacinthe Rigaud (1659-1743). He was court painter to Louis XIV and in 1701 produced his famous portrait of the king draped in his sumptuous robes of state - now in the Louvre, Paris. Most of his portraits were in the grand manner, and proved very popular with the nobility and well-to-do in Paris. Amongst his distinguished sitters were the French writer Boileau, the French theologian Bossuet, and the king of Sweden, Charles XII. 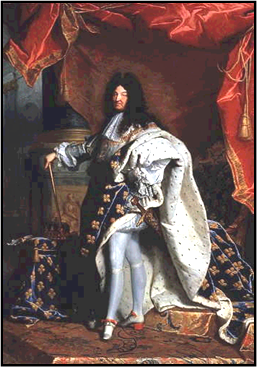 xxxxxAnother painter of this period who produced a large number of formal and elegant portraits - but not on the same scale as Kneller - was the French Baroque artist Hyacinthe Rigaud (1659-1743). He was court painter to Louis XIV from 1688, and in 1701 produced his famous portrait of the king sumptuously draped in his robes of state (illustrated) - now in the Louvre in Paris. This grandiose portrait, full of pomp and majesty, was typical of his work in general, which, in certain respects, showed the influence of the Dutch artist Rembrandt and the Flemish painter Van Dyck. His later, more natural style produced some fine portraits, including The Artist’s Mother, painted in 1695.

xxxxxBorn at Perpignan in the Roussillon region of southern France, he studied at Montpellier and Lyon before going to the École des Beaux-Arts in Paris in 1685. He became a court painter three years later and, after the king’s death, he served Lou 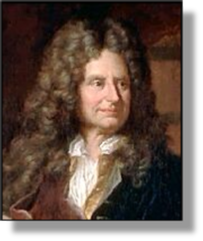 is XV. He was first and foremost a portraitist and, as such, enjoyed an enviable reputation among the nobility and wealthy bourgeoisie of Paris. His distinguished sitters included the French writer Nicholas Boileau (illustrated left), the French theologian Jacques Bossuet (illustrated below), and the king of Sweden, Charles XII. 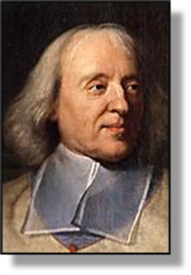 xxxxxIncidentally, the French poet and literary critic Nicholas Boileau (1636-1711) was particularly famous for his L’Art poétique, published in 1666, a treatise in verse which set out the rules of classical drama and poetry. ……

xxxxx…… JacquesxBossuet (1627-1704) (illustrated right) was a French bishop who, in his day, gained a wide reputation for his sermons and funeral orations. They are valued today as gems of French classical prose. A firm upholder of royal absolutism, Bossuet quoted the bible in support of the divine right of kings and was in favour of Louis XIV’s revocation of the Edict of Nantes in 1685.