xxxxxThe Englishman Grinling Gibbons was one of the greatest wood carvers of his day. In 1667 he was befriended by the diarist John Evelyn, and he introduced him to the architect Christopher Wren. As early as 1671 he was commissioned by Charles II to decorate the royal apartments at Windsor Castle. He later worked for William and Mary at Hampton Court and Kensington Palace, and became master carver to the Crown in 1693. Some of his finest work - which included exquisitely carved wall panels, borders, chimney pieces and screens - is to be seen in country houses, such as Blenheim and Chatsworth, and in St. Paul’s Cathedral. There, his intricate carving on the choir stalls and the bishop's throne was completed in 1697. His still-life carving was largely composed of flowers, fruit and birds. Such decorative work had a marked effect on later English craftsman, especially Thomas Chippendale. 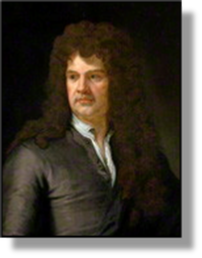 xxxxxGrinling Gibbons, one of the greatest wood carvers of his day, was born and educated in the Netherlands, where his English father had earlier gone to live. He came to England in about 1667 and settled at Deptford in south-east London. Here he was befriended by the English diarist John Evelyn who, recognising his extraordinary talent, brought him to the notice of the architect Christopher Wren. Indeed, so impressive was his work that in 1671 he was commissioned by Charles II to decorate the new royal apartments at Windsor Castle. Notable there was his fine adornment of the King's Eating Room, where he festooned the walls with cascades of realistic flora and fauna, all cut in deep relief. He subsequently worked for William and Mary at Hampton Court and Kensington Palace, and in 1693 was appointed master carver to the Crown, an office he held until his death in the reign of George I.

xxxxxOver the years, he produced exquisitely carved wall panels, borders, chimney pieces and screens for a large number of country houses, including Blenheim, Chatsworth and Petworth - where his decorative work is perhaps seen at its finest - but he is doubtless best remembered for the delicacy of 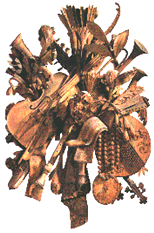 his work in St. Paul's Cathedral, completed in 1697. Here, working in close collaboration with Wren, he was responsible for the intricate carving of the choir stalls and the bishop's throne, together with much of the exterior stone ornamentation beneath the lower windows. In addition, he provided decoration for seven of Wren's city churches. A fine example of his skill can be seen in St. James's Church, Westminster. Here his work includes a wooden organ case and reredos, and a marble font designed by Wren himself.

xxxxxHis still-life carving was largely composed of flowers, fruit and birds, but cherubs, acanthus leaves and musical instruments in oak and limewood also adorned his work. So natural and realistic were these features that, referring to Gibbons's technical skill, the 18th century English writer Horace Walpole wrote: He gave to wood the loose and airy lightness of flowers, and chained together the various productions of the elements, with the free disorder natural to each species. His decorative work had a marked influence on later English craftsmen, particularly the 18th century cabinet maker Thomas Chippendale. 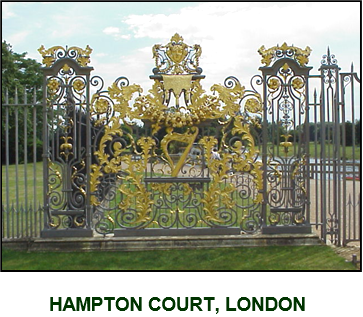 xxxxxGibbons was among the finest of the craftsmen employed by Wren in his rebuilding of St. Paul's Cathedral. Among others who assisted him were the English architect Nicholas Hawksmoor and the French ironworker Jean Tijou. A Huguenot refugee, Tijou came to England in 1689 and was responsible for the iron gates of the choir. He also gained the patronage of the king, his major work for the Crown being the making of a large number of ornate gates and screens for Hampton Court Palace. These and other works doubtless played a part in bringing about a revival of ironwork in England during the 18th century, particularly in London and the university towns of Oxford and Cambridge.