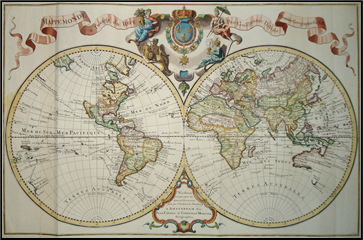 xxxxxThe Parisian cartographer Guillaume Delisle is regarded as one of the founders of modern geography. He published close on 100 maps, and although their artwork was not of the highest quality, their scientific value was considerable. By astronomical observation - he was a student of the astronomer Jean-Dominique Cassini - he defined the continental outlines more accurately, and made significant improvement in determining lines of longitude. In 1700 he produced a world map in hemispheres (illustrated), maps of the continents, and both a terrestrial and celestial globe.

xxxxxIn recognition of his pioneer work he was made the chief geographer to the king in 1718 - the first appointment of its kind. As we shall see, the advances he made in mapmaking were ably continued by his fellow cartographer and countryman Jean Baptiste Bourguignon d'Anville in 1743 (G2).