xxxxxThe Dutch landscape artist Meindert Hobbema was the star pupil of his fellow countryman Jacob van Ruisdael. They often painted the same rural scene, complete with streams, water mills and tiny cottages. Apart from his masterpiece, The Avenue, Middelharnis, produced in 1689, he did little painting after the age of 30. He died in poverty, but his work, noted for its serenity, composition and subdued colours, influenced the Barbizon School in France and the Norwich School in England, and he was much admired by a number of English artists, including Gainsborough, Constable and Crome. 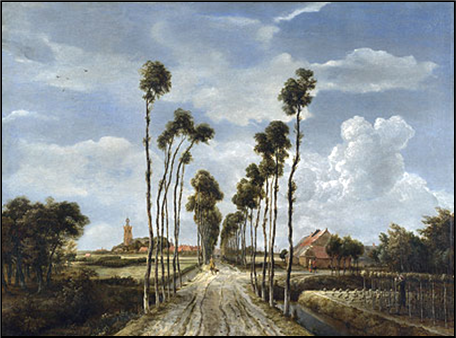 xxxxxThe Dutch landscape artist Meindert Hobbema was a friend and star pupil of his fellow countryman Jacob van Ruisdael. They would often go on sketching trips together and paint the same views. As a result, he imbibed much of his master's style and, like him, became outstanding in his portrayal of the streams, hedgerows, water mills and tiny cottages of the Dutch rural scene. His depiction of cloud and light also owed much to Ruisdael, but he tended to depict nature in its quieter moments, and his range of subject matter had much less width.

xxxxxHe lived all his life in Amsterdam, but little is known of his early days. It would seem that, apart from his masterpiece, The Avenue, Middelharnis (illustrated), produced in 1689, he did much less painting after the age of 30 when, newly married and desperately in need of money, his wife helped him to obtain a minor post as an excise official. It is perhaps not surprising, therefore, that he enjoyed little success as a painter during his lifetime. We are told that he died in poverty and was buried in the pauper section of an Amsterdam cemetery. 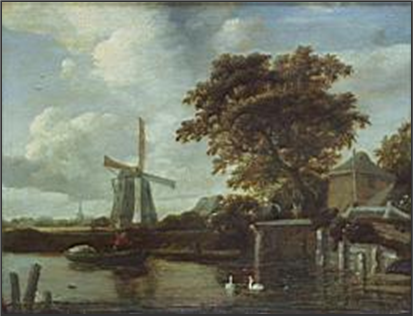 xxxxxBut recognition did come, late though it was in the coming. In the 19th century his landscapes influenced the work of the Barbizon School in France and the Norwich School in England, and he was much admired by a number of English artists including Gainsborough, Constable, and Crome. Indeed, it is said that when Old Crome, as he was called, died in 1821 his last words were: "Hobbema, Hobbema, how I have loved you". Illustrated here is his Windmill at the Riverside.

xxxxxHis work is well represented in the Rijksmuseum, the Dutch national gallery in Amsterdam, and he has nine paintings in the National Gallery, London, including his masterpiece "The Avenue". The subject and serenity of this work, the painstaking detail, the subdued palette, and the brilliant composition are typical of Hobbema's work, and mark him out as one of the finest Dutch landscape artists of his time, second only to his master. Shown below (left to right) are Watermill by a Woody Lane, The Travellers, and Landscape with a Windmill.