xxxxxAs we have seen (1300 E1), the Pueblo people of south-west America first lived in caves and mud dwellings, but by about 1050 they began a remarkable period of communal living in villages known as Pueblos. They lived in high-rise apartments, often constructed on a cliff face, but around 1300 these were abandoned - possibly because of drought - and they moved to parts of Mexico and Arizona. Here they were conquered by the Spaniards at the end of the 16th century and cruelly treated. In 1680 they rose up in force against their oppressors, driving them out and killing some 400. The Spaniards returned in 1692 and reclaimed their land, but the Pueblo people managed to retain their cultural identity, and their descendants remain in the area to this day. 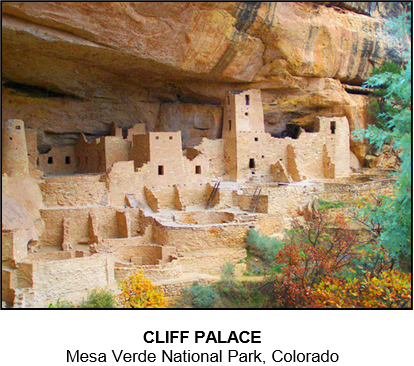 xxxxxAs we have seen (1300 E1), the Pueblo people of south-west America were descendants of the prehistoric Anasazi. They first lived in caves and shelters made of poles and mud, but by about 1050 AD they began a remarkable period of communal living, grouping their dwellings together in Pueblos - Spanish for villages. Many of the houses were linked together and built within the shelter of a rock face (illustrated), whilst others were free-standing terraced apartments, some three or four storeys high. For security reasons many ground floor rooms were only used for storage, and were constructed without doors or windows. Access was by means of ladders, provided, when required, by those living above.

xxxxxThen around 1300 these remarkable cliff villages and high-rise apartment buildings were abandoned. For some reason - possibly drought or incursions by the Nagao and Apache tribes - the Pueblo people moved south and settled in parts of New Mexico and Arizona. Here they built new pueblos, but their standard of construction was much inferior, and the layout was on a much smaller scale. They settled peacefully in this area, but their unique way of life was shattered with the coming of the Spanish at the end of the 16th century. Their sacred objects and ceremonial pits were destroyed, Roman Catholicism was forced upon them, and they were cruelly treated by their new masters. 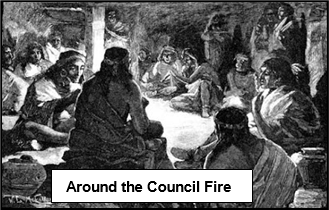 xxxxxIn 1680, however, following a number of unsuccessful revolts, the Pueblo people living in New Mexico, led by a medicine man and supported by the Apache Indians, rose up in force and put the Spanish to flight. Four hundred Spaniards were killed, churches were destroyed, and all Christian ceremonies were abandoned. Their courageous stand against the might of the Spanish empire earned them twelve years of independence, but in 1692 the Spaniards, led by Governor Pedro de Vargas, returned in force and re-conquered their lost colony. By this time the number of pueblo settlements had been much reduced. Nevertheless, the people managed to retain their cultural identity, and their descendants are still to be found on the site of these ancient villages.