xxxxxThe Englishman Samuel Pepys is well known for his Diary, a vivid account of affairs, begun in January 1660. It covers the major historical events, including the Restoration, the Plague and the Great Fire of London, as well as giving a frank account of his own life and feelings over the next nine years. He worked in the Navy Office in London and, by dint of hard work, became secretary of the Admiralty in 1672, initiating much-needed reforms for the building of a powerful navy. His position made him enemies, however, and he was one time wrongly accused of taking part in the Popish Plot. He was a confidante of both Charles II and James II, president of the Royal Society, and a member of parliament. He numbered among his friends Isaac Newton, Christopher Wren, Godfrey Kneller and John Dryden. His Diary, written in shorthand for security reasons, was not actually deciphered until 1825. 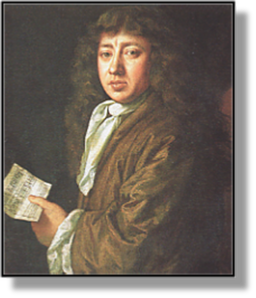 xxxxxThe Englishman Samuel Pepys, so well known for his Diary, was born in London, the son of a tailor. He attended St. Paul's School, and then studied at Magdalene College, Cambridge. On returning to London, he worked as a clerk in the Exchequer for a year, and then in 1660 obtained service in the Navy Office, working as "clerk of the King's ships". By dint of his ability and hard work he quickly rose to high office, being appointed secretary of the Admiralty by Charles II in 1672. In this position he introduced some much-needed reforms, and began to build up a powerful navy, ever mindful of its humiliating defeat at the hands of the Dutch in 1667. He became a member of Parliament for Castle Rising in 1673, and then for Harwich six years later.

xxxxxBut his success in office, and, above all, his insistence on efficiency and honesty, made him powerful enemies. In 1679 his career was seriously interrupted when he was implicated in the Popish Plot (conjured up by Titus Oates), and imprisoned in the Tower of London. He was acquitted and reinstated in 1684, but he was then alarmed to find that the navy was near to ruin. During his time in prison, 76 ships had been reduced to 24, and 12,000 men had dwindled to 3,000, with the majority of those on the point of mutiny through lack of pay. It was due to Pepys' direct appeal to both Charles II and James II, and his own untiring efforts, that within three years a well-organised navy could boast of 92 ships and a disciplined force of seamen. As the Public Orator of Oxford University put it, "truly sir, you have encompassed Britain with wooden walls". However, in 1689, following the "Glorious Revolution", a new charge was brought against him - this time he was accused of selling information to the French - and this led to his retirement. 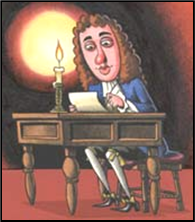 xxxxxHe began writing his famous Diary on 1st January 1660, and made daily entries for the next nine years. Apart from being a unique and gripping record of the historical events of that period - including The Restoration, the Plague, and the Great Fire of London - it discusses his job in naval administration, touches on court scandals, and gives a very frank account of his own private affairs during a troubled period in the life of the capital. It is written in an attractive, pithy style in which he sums up a person or an event in a few aptly chosen words. Nor does he spare his own blushes, describing with candour his own foibles and mean thoughts. Unfortunately he stopped writing the diary at the end of May 1669 because he feared, mistakenly as it turned out, that his eyesight was beginning to fail. Nonetheless, it was one of the most revealing and intimate diaries ever written.

xxxxxThe diary was written in shorthand (that devised by Thomas Shelton in 1626) in case it fell into the wrong hands, and was not in fact deciphered until 1825. Pepys bequeathed the original manuscript - some 3,000 pages in six volumes - to Magdalene College, Cambridge, together with his letters and other documents. He spent the last years of his life assembling the collection, and it is now housed in the Pepysian Library. His only other published work was his Memoires Relating to the State of the Royal Navy (1690), made up of letters and documents concerned with his public life. 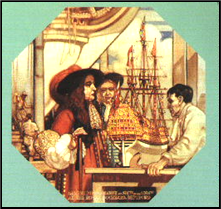 xxxxxIn the latter part of his career Pepys, as chief administrator of the Navy, was one of the most important and well-known men in England. A trusted confidante of both Charles II and James II, he was at one time president of the Royal Society, master of Trinity House, and baron of the Cinque Ports. He numbered among his friends most of the eminent men of the day, including Isaac Newton, Christopher Wren, Godfrey Kneller and John Dryden.

xxxxxIncidentally, in 1659, when Pepys worked as a clerk in the Exchequer, he found himself in the office of one of the tellers called George Downing (1623-1684), the man after whom Downing Street was later named. ........ Some years on, in 1805 in fact, an Admiralty minute referred to Pepys as " a man of extraordinary knowledge, of great talent and the most indefatigable in industry". It was a fitting tribute, but it was somewhat late in coming! 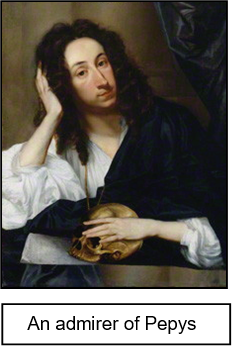 xxxxxOne of Pepys’ life-long friends was his fellow diarist John Evelyn (1620-1706). He greatly admired Pepys, and wrote the following words on hearing of his death: "He was universally belov'd, hospitable, generous, learned of many things, skilled in music, a very greate cherisher of learned men of whom he had the conversation."

xxxxxHis own diary, written over the years 1641 to 1706, was discovered in 1817 and published the following year. A wealthy country gentleman, Evelyn had a wide circle of friends, many of whom were distinguished in public life, so his work provides a store of information about life in 17th century England. Like Pepys' work, it contains useful character studies, and many valuable descriptions of contemporary events, but it has much less personal detail and, as a piece of literature, is not so attractive and accomplished in style.

xxxxxHe was born of a wealthy family in Dorking, Surrey, and studied law in London and Oxford, but on completion of his studies he devoted his time to horticulture, improving the grounds of the family estate at Wotton House. Although a firm Royalist, when the civil war broke out in 1642 he decided not to join the king's cause openly for fear of reprisals against his family. He thus spent the war years travelling in France and Italy. By the early 1650s he was back in England, working on the gardens of his home at Sayes Court, Deptford, London.

xxxxxFollowing the Restoration he was one of the founder members of the Royal Society, and served on a number of commissions, including those concerned with the improvement of London streets, the workings of the Royal Mint, and the proposed repair of St. Paul's Cathedral. It was while a member of one of these commissions - concerned with the sick and wounded from the Dutch wars - that he first met and struck up a friendship with Samuel Pepys, then working in the Navy Office. 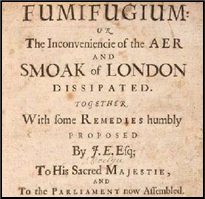 xxxxxApart from his interest in daily events, Evelyn was a man of great curiosity, and wrote about 30 books on a wide range of subjects, including horticulture, religion, history, the fine arts, architecture and the law. He produced two somewhat unusual works for his time. The first, Fumifugium, published in 1661 and subtitled The Inconvenience of the Air and Smoke of London Dissipated, must surely be seen as one of the earliest attempts to tackle the problem of air pollution. The second, Sylva, a textbook on the cultivation of trees, was produced for the Navy in 1664, and included a call for reforestation. He also wrote a touching biography on the Life of Mrs Godolphin, a lady whom he had known earlier when she was a maid of honour at court.

xxxxxIncidentally, whilst living at Sayes Court, Evelyn met Grinling Gibbons, who, after a childhood in the Netherlands had returned to England and was living at Deptford. By all accounts, Evelyn helped the talented young craftsman to establish himself as a woodcarver, thus setting him upon his brilliant career.

xxxxxJohn Evelyn (1620-1706) was a life-long friend and admirer of Pepys. He also wrote a diary. Written over the years 1641-1706, it provided a store of information about life in 17th century England. He was a founder member of the Royal Society and served on a number of commissions, including one on the proposed repair of St. Paul’s Cathedral. A man of great curiosity, he wrote about 30 books on a wide range of subjects, including horticulture, the fine arts, and architecture, and he produced treatises on the problem of air pollution in London (the first of its kind), and the cultivation of trees and reforestation. 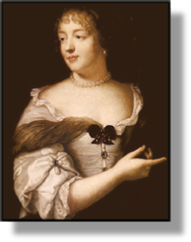 xxxxxThough not in the form of a diary, the letters of the French writer Madame de Sévigné (1626-96), written at this time, certainly deserve mention, providing as they do a fascinating insight into the life of high society at the court of Louis XIV. Born in Paris of a distinguished family, she received a good education, and married a French nobleman, Marquis Henri de Sévigné, at the age of 18. He was killed in a duel seven years later, and she then immersed herself in Paris high society, becoming a frequent visitor to the salon of Madame de Rambouillet, and getting to know a large number of distinguished people.

xxxxxIt was in 1671, soon after her daughter, Françoise Marguerite, had married and moved away from Paris, that she started up her famous correspondence. Over the next seven years or so she wrote more than 1,600 letters, the vast majority to her 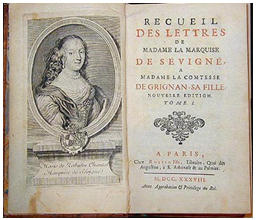 daughter. In a witty, spontaneous, and intimate style, she passed on current gossip and events in fashionable society, commented on everyday topics, gave shrewd portraits of prominent people (such as Corneille and Racine), or just rattled on about her own domestic routine. Some of the topics were amusing, some serious, some mundane, but very few lacked a measure of interest. But it was not so much what she said in the letters, as the charming, informal way in which she said it that has earned her a place in French literature. The letters - never intended for a wide readership - were eventually published in 1725-1726, long after her death.

xxxxxThe letters of the French writer Madame de Sévigné (1626-96) were written at this time, and these provide a fascinating insight into the life of high society at the court of Louis XIV. She started her famous correspondence in about 1671, writing to her daughter and others about current events and gossip. They include shrewd portraits of prominent people, including Corneille and Racine. These charming letters, written in a witty and intimate style, earned her a place in French literature. They were published in 1725.