xxxxxThe Italian Antonia Stradivarius was the brilliant pupil of Nicolo Amati, the talented grandson of the violin maker Andrea Amati. He came to perfect the art of violin making, but the reason for his unique skill remains a mystery. It was probably due to the proportions of his instruments and/or the thickness and quality of the wood he used. He produced his first violin in 1666 and was still making instruments, including violas and cellos, at the age of 93. He opened his own workshop in 1680 and within ten years had started his Golden Period, two decades in which he produced the world’s finest violins, instruments perfectly balanced, and both mellow and strong in tone. In all, his workshop produced some 1100 violins, violas and cellos, and about half this number has survived, unequalled in quality, and virtually priceless. 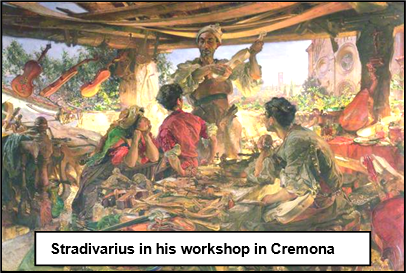 xxxxxAs we have seen, Andrea Amati was the first of a celebrated Italian family of violin makers from Cremona. Working in the mid 16th century he produced some fine violins, together with a number of violas and cellos. The shape and style he developed was continued by his two sons, the "brothers Amati" (Antonio and Girolamo), but it was his talented grandson, Nicolo Amarti (1596-1684) who was to bring the violin to perfection via his brilliant pupil Stradivarius.

xxxxxAntonio Stradivarius (Latin form of Stradivari), also came from Cremona. Underxthe guidance of his teacher Nicolo Amati, a craftsman of outstanding ability, he came to perfect the art of violin making, though the reason for his unique skill remains something of a mystery. It was probably due to the changes he made to the proportions of the instrument, but some put it down to the deep-coloured varnish that he used - made from a secret formula. Modern research now suggests that the thickness of the wooden top and back plates, plus the minute pores in the wood itself also play an important part. Over the years his family workshop produced some 1,100 instruments - including violas and cellos. Of this number some 600 have survived and, as one can imagine, they are virtually priceless. 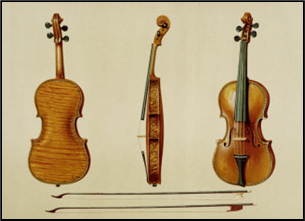 xxxxxStradivarius made his first violin in 1666 and he was still making instruments at the age of 93, over 70 years later! He continued to work with Amati until 1684, but he opened his own workshop in 1680, and it was then that he began to make violins to his own specification. By 1690 he was producing what he called his "Long Pattern", a longer instrument with a shallower arch. Within ten years he had perfected his skill, and there then followed what has come to be known as his Golden Period - some twenty years in which he manufactured his finest violins: perfectly balanced, mellow and strong in tone, and beautiful in appearance. Of those instruments which have survived, all have a label which bears a Maltese cross and the initials "AS" in a double circle, and many bear distinctive names, such as "Dolphin" and "Vieuxtemps". Illustrated here is his “Hellier Violin”, produced around 1679 and considered to be one of the finest Stradivaris in existence. It is now on display at the Museo Civico in Cremona, Italy. In his work he was assisted by his sons, Francesco and Omobono, two of his eleven children.

xxxxxIncidentally, a contemporary rival to Stradivarius was the Italian Giuseppe Antonio Guarneri (1687-1745), an outstanding member of a talented family of violin makers, also living in Cremona. His violins in particular were noted for their rich tones and, as we shall see, were highly thought of by the brilliant Italian violinist Nicolo Paganini. He was generally known as Giuseppe del Gesu (Giuseppe of Jesus) because of the initials he placed after his name (IHS) - the sacred monogram which is the beginning of the Greek word for Jesus.