xxxxxAs we have seen (1632 C1), the Great Mughal of India, Shah Jahan, came to his throne in 1627. Under his rule, his dynasty reached the height of its power. In 1658, however, he was overthrown by his son Aurangzeb, a ruthless and fanatical Muslim. In 1669 he closed all Hindu temples and schools, and imposed a poll tax on all non-Muslims. This aroused much internal opposition, and helped towards his eventual downfall. He was a sound administrator and, as an able military leader, embarked on a campaign of conquest. He crushed the Afghans, the Sikhs and the Rajputs in the north, and, in the south, advanced further into the Deccan. There, however, he failed to subdue the Marathas, founded by their inspired leader Shivaji in 1664. As we shall see, after Aurangzeb’s death in 1707 (AN), these people, growing in strength, were to become the dominant power in much of India by the mid 18th century. 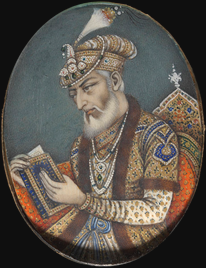 xxxxxAs we have seen (1632 C1), the Great Mughal of India, Shah Jahan, seized the throne following the death of his father in 1627, having first disposed of all his male relatives. He is especially remembered today for his building of the beautiful mausoleum known as the Taj Mahal, and for the magnificence of his court. He had the fabulous Peacock Throne made to his own specifications, and he possibly possessed the famous koh-i-noor diamond. But his military achievements were no less spectacular. Under his rule his dynasty reached the height of its power. Nonetheless, in 1553 he lost Kandahar to the Persians and five years later, taken seriously ill, he was overthrown by his son Aurangzeb (illustrated) and imprisoned at Agra until his death in 1666.

xxxxxAurangzeb (meaning "Ornament of the Throne") was the last of the great Mughal emperors of India. Treacherous and ruthless by nature, in the war of succession that followed his palace revolution he won the Battle of Deorai, executing two of his brothers, a son and a nephew in order to consolidate his position. Unlike his predecessors, he was a fanatical Muslim, and showed not the slightest tolerance towards the Hindus or the Sikhs. In 1669 he ordered the closure of Hindu schools and temples, and imposed a poll tax (the jizya) on all non-Muslims. The opposition he aroused by such measures contributed to his empire's eventual downfall. In maintaining control over his vast territory - at least in the plains and open roads - he proved a sound administrator and an able military leader, but the opposition he aroused from within, his constant wars of conquest, and his determination to drive further south into the Deccan, sapped the empire's morale and material strength, making collapse virtually inevitable. 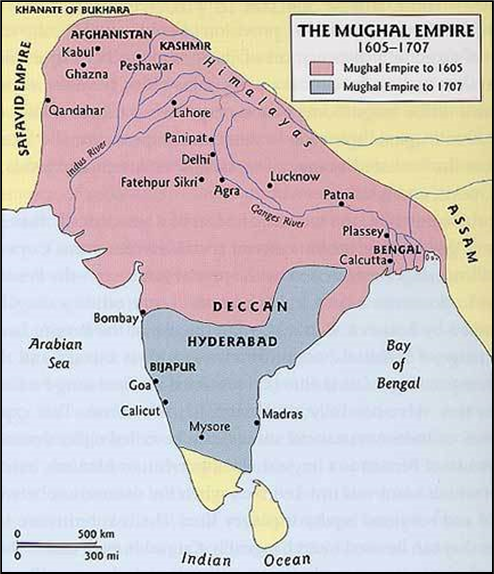 xxxxxOn becoming Emperor he adopted the title Alamgir ("Conqueror of the World") and tried his best to live up to his name. He ruthlessly put down revolts by the Afghans along the north-west frontier, earned the hatred of the Sikhs in 1675 by killing their spiritual leader, and in 1681 crushed a rebellion in the north by the Rajputs, a militant Hindu people. In the Deccan he conquered the Muslim kingdoms of Bijapur in 1686, and Golconda in 1687, and then extended his rule as far south as Tanjore and Trichinoply. Against the Marathas, however, in the south and west, victory was slow in coming, and was never complete when it did. From as early as 1664 their inspired leader Shivaji had taken up arms against the Muslims and defeated them on several occasions. Then in 1674, after four years of fierce fighting, he founded the independent Hindu state of Maratha. Following his death in 1680, Aurangzeb spent many years trying to regain this territory but, faced with well-directed guerrilla tactics, he never managed to gain complete control. As we shall see after his reign came to an end in 1707 (AN), the Marathas slowly regained their strength, and by the mid-18th century were the dominant power in much of India. 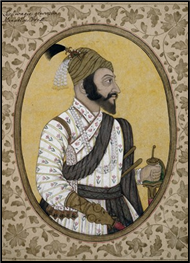 xxxxxIncidentally, the Maratha leader Shivaji (1630-1680) has become something of a folk hero in his own land - today known as Maharashtra and stretching from Bombay to Goa along the west coast of India. Regarding himself as divinely appointed to bring freedom to the Hindus, he won a number of early victories over the forces of the Mughal Empire, including two daring raids on the rich port of Surat. He and his son were eventually captured and imprisoned at Agra, but they both managed to escape, smuggling themselves out in two large baskets which were intended to provide food for the poor. He was thus able to carry on the fight and establish a Maratha state which, given time, was to see itself as the rightful successor to the Mughal empire.