xxxxxFrom an early age, the Dutch philosopher Baruch Spinoza questioned the nature of God and the immortality of the soul. His works included a Treatise on God, Man and his Well-Being, On the Importance of Understanding, and, in 1665, the first draft of his major work, Ethics Demonstrated with Geometrical Order, completed in 1674. His philosophy was much influenced by the works of René Descartes, but, adopting a mathematical approach, he argued that God was the “substance of all things” and thus mind and body could not be separate entities. Everything had to be viewed from “the perspective of eternity” before one could attain “the intellectual love of God”. His Treatise on Religious and Political Philosophy, published in 1670, was severely criticised by the Church, but in it he advocated religious tolerance and intellectual freedom, and justified resistance against a government that did not protect the rights of its people. The philosophers Leibniz and Hume questioned aspects of his thought, but his work influenced the educator Schelling, and his pantheism inspired the poets Goethe, Wordsworth, Coleridge and Shelley. 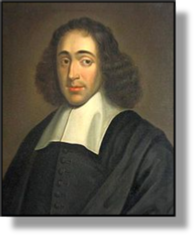 xxxxxThe Dutch philosopher Baruch Spinoza was born in Amsterdam of Portuguese parents. They were well respected members of the Jewish community there, and it is likely that Spinoza attended the city's school for Jewish boys. An able, inquisitive young man, he soon began to question the orthodox doctrines of his faith and those of Christianity. He argued that there were inconsistencies in the Bible, and that this seriously challenged the idea that its contents had been totally inspired by God. He then went on to question the nature of God and the immortality of the soul. The local Jewish leaders, failing to keep him silent on such matters - and fearful of the repercussions on their somewhat vulnerable community - excommunicated him in 1656, and the civil authorities then banished him from the city. This punishment, it would seem, was only imposed for a short while but, in fact, he never made his home there again. 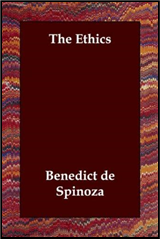 xxxxxFor the next five years he lived just outside Amsterdam, supporting himself by working as a grinder of optical lenses for spectacles, microscopes and telescopes. He than lived for two or three years at Rijnsburg, and it was during this period that he completed two of his works: a Treatise on God, Man and His Well-Being, and his dissertation On the Importance of Understanding. In June 1663 he moved to Voorburg, and it was there in 1665 that he finished the first draft of his three-part version of his major work, the Ethics Demonstrated with Geometrical Order, eventually completed in five parts in 1674, but not published until after his death.

xxxxxWhile at Rijnsburg he also worked on his Treatise on Religious and Political Philosophy. It was published anonymously in 1670, and came in for some severe criticism from the Christian Church. In its political theory, however, he advocated religious tolerance and intellectual freedom. He argued that no government possessed a divine authority, and should be resisted if it no longer protected the rights of its people or turned against them. In the same year he moved to The Hague. Here he was offered a chair in philosophy at Heidelberg University, and a pension from Louis XIV, but, determined to maintain his intellectual freedom, he declined both. 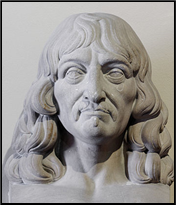 xxxxxHis philosophy was much influenced by the theories of the French philosopher René Descartes (illustrated), but he could not accept, above all, his dualism of mind and body. Adopting a rational approach in order to discover the truth about reality - as one uses mathematics and logic in solving a problem in geometry - he argued that there was only one “substance of all things”, and this could be seen as either Nature or God. Everything in the universe was One. Given this idea of "pantheism", it followed that conscious thought and the material world (mind and body) were but two "modes" of the same natural or divine substance, not separate entities acting one upon the other. In such a concept, humans had no freedom of will and, in order to reach true happiness, passions such as lust, greed and ambition, had to be totally subordinated to an intuitive understanding of nature conceived as an interconnected whole. This meant that everything must be seen, as he put it, from "the perspective of eternity" before one could attain “the intellectual love of God”. 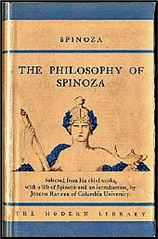 xxxxxSuch ideas, broadly based on Cartesian philosophy but belonging to no recognised school, were somewhat difficult to accept or, indeed, understand in parts. The German philosopher Gottfried Wilhelm Leibniz, who met Spinoza in 1676, and who was himself a rationalist, questioned some aspects of his reasoning, including the arbitrary definition of "substance". It is not surprising, therefore, that his system did not give rise to any particular school of thought, and that his highly individual approach failed to gain recognition until a century after his death. The idea of an impersonal God, for example, was not well received, and his general hypothesis was described by the French encyclopedist Pierre Bayle as "most monstrous", and by the Scottish philosopher David Hume as "hideous”. Nevertheless, his concepts have left their mark on philosophical thinking down the ages - the German philosopher and educator Schelling, for example, found his work of value - and he also had an influence on poets like the German Goethe, and the Englishmen Wordsworth, Coleridge, and Shelley, all of whom found inspiration from his pantheistic interpretation of nature.

xxxxxSpinoza died of tuberculosis at The Hague in 1677, the cause of his death being clearly linked to the inhaling of glass dust during his many years as a lens grinder.