1661  In England, bank notes are issued for the first time. The following year silver pennies are no longer minted, but the first gold guinea comes into circulation.

The first spirit or bubble level is invented in 1661.

1670 The minute hand begins to appear on watches.

In 1671 a Colonel Thomas Blood, disguised as a clergyman

steals the English Crown from the Tower of London. He

nearly gets away with it but is eventually captured. Charles II

was so astonished at his daring that he pardoned him!

In 1672 the Dutchman Jan van der Heyden (1637-1712), with the help of his son, makes the first flexible hose out of strips of leather. He also designed a more  efficient  fire engine and installed lamp posts to provide street lighting for the city of Amsterdam.

In 1676 the famous French chef known as Le Grand Vatel

committed suicide because the dinner he had prepared for

Louis XIV did not come up to the king's expectations!

In 1677 ice cream becomes popular as a dessert in Paris - but only for those who could afford it!

ThexAshmolean Museum of Art and Archaeology is established at Oxford University in 1677 to  house  collections donated by the antiquarian Elias Ashmole (1617-1692).  It is opened to the public in 1683.

In 1678 the chrysanthemum arrives in Holland from Japan.

Around 1680 the dodo, the flightless bird from the island of Mauritius, becomes extinct. Hence the expression “dead as a Dodo”. This painting  is by  the  Flanders-born Dutch artist 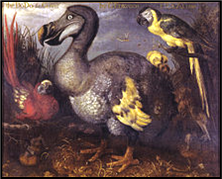 in London. Built to provide a home for wounded and discharged soldiers,

its inmates become known as "Chelsea Pensioners". It was opened in

1694 and houses colours captured at the Battles of Blenheim and

Waterloo. Today, the grounds are the site of the annual flower show of

In England in 1682 the last hanging of a witch takes place.