xxxxxAs a fervent Puritan preacher John Bunyan was imprisoned for 12 years following the restoration of Charles II in 1660. It was during this period that he wrote his Grace Abounding to the Chief of Sinners, describing his many battles with Satan and God’s mercy towards him. He was set free in 1672, but was back in prison three years later, this time in Bedford. Here he began writing the first part of his masterpiece Pilgrim’s Progress in which he describes Christian’s struggle against evil as he journeys from the City of Destruction to the Celestial City. Written in a simple, biblical style, it become a popular children’s classic, but at a deeper level, it was intended as a moving story of a soul’s quest for salvation. The book, the first part published in 1678 and the second in 1684, proved relevant to all social classes and, over the years, has been translated into many languages. 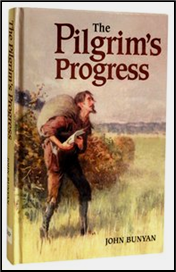 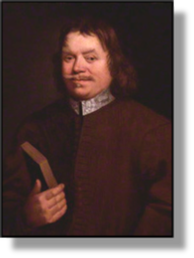 xxxxxThe fervent Puritan preacher John Bunyan was born at Elstow, near Bedford, and after attending the village school, became a tinker like his father. With the outbreak of the Civil War, he served for nearly three years in the Parliamentary army and, on his return to Elstow, married a local woman, Margaret Bentley. Bunyan was troubled with religious doubts and torment at this time, and it took some years for him to overcome his nagging fears and his deep sense of guilt. However, in about 1655 he joined the Bedford Separatist Church. Here he soon made a name for himself, attracting large audiences as a preacher, and writing a number of religious tracts, including Some Gospel Truths Opened. It was in these early days that he read a book belonging to his wife entitled The Plaine Mans Path-way to Heaven, a work which was clearly a source of inspiration for his masterpiece some twenty years later. 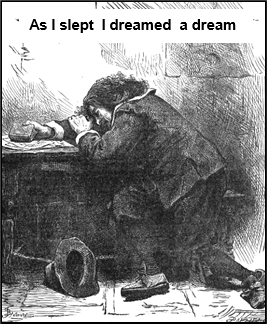 xxxxxIn 1660, however, his life changed dramatically. With the restoration of Charles II, Puritans lost their freedom of worship. As a consequence he was committed to Bedford county jail for unlawful preaching (illustrated), and he remained there for no less than 12 years, refusing to be released until he was permitted to preach again. He wrote a number of books during these years in prison, the best known being his spiritual autobiography of 1666, Grace Abounding to the Chief of Sinners, a work in which he describes his many battles with Satan and "the merciful working of God" upon his sinful soul. And during this same time, he was allowed occasional visits to see family and friends, and he was able, so we are told, to support his family by making "long tagg'd" shoelaces.

xxxxxSet free in 1672, he became the pastor of the Bedford congregation - earning the nickname "Bishop Bunyan" - but three years later he was back in prison again, this time in the jail on Bedford Bridge. Imprisoned for six months, it was here that he began writing the first part of his masterpiece The Pilgrim's Progress from This World to That Which Is to Come. (Though he might well have started to put his ideas together much earlier than this). The first part, published in 1678, was an immediate success, as was the second part, completed six years later. The clarity but dream-like quality of its narrative, and the pertinence of its subject, made it popular across all social classes. 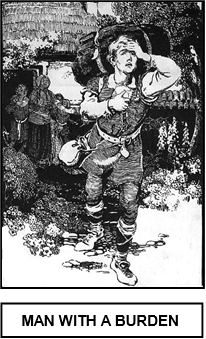 xxxxxPilgrim's Progress describes in simple, biblical style the pilgrimage of the book's hero, Christian, as he journeys from the City of Destruction to the Celestial City, passing through such places as the Slough of Despond, the Valley of the Shadow of Death and Vanity Fair, and meeting on his way such characters as Mr Faithful and Mr Worldly Wisdom. Written with such verve and imagination, and employing allegory in such clear-cut terms, it has become, at one level of understanding, a classic in children's literature, depicting the struggle between good and evil. At a deeper level, however, it remains, as intended, a moving story of a man's journey to God and a soul's quest for salvation. Ten editions of the work were published during Bunyan's lifetime. Today it ranks among the most famous of religious allegories in English literature, and it has been translated into many languages.

xxxxxAmong his other works - all showing a mastery of English prose - are The Life and Death of Mr Badman (1680), the biography of a sinful rogue via a dialogue between Mr Wiseman and Mr Attentive, and The Holy War, in which the City of Mansoul (Man's Soul) is attacked by Diabolus and delivered by Emmanuel. When Bunyan died of pneumonia in August 1688, it is hardly surprising that he had become widely recognised as the leading Puritan preacher and writer of his time. He was buried at Bunhill Fields, in the borough of Islington, London, the traditional burial ground for Non-

xxxxxIncidentally, the English writer William Makepeace Thackeray took the title of his book Vanity Fair from Pilgrim's Progress. In this 19th century work, like Bunyan, he depicts the weaknesses and shortcomings of contemporary society. Bunyan's Vanity Fair was based on the great fair held at Stourbridge, near Cambridge. .......

xxxxx…… The Bunyan Meeting House in Bedford was built in 1850 on the site of the barn in which John Bunyan began preaching in 1656. In 1876 new doors were added with panels depicting scenes from Pilgrim's Progress.