xxxxxAs we have seen, the great Manchu emperor K’ang-hsi, having attacked rebellious warlords in the south in 1673, had consolidated his power over the whole of China within ten years. An educated man who was anxious to learn from other cultures, he is especially remembered today for the part he played in rebuilding the Chinese porcelain industry, in decline from the beginning of the century. In 1682 he appointed the brilliant craftsman Ts’ang Ying-hsuan as director of the imperial pottery and he greatly increased the quality and range of production. To this period belongs the crisp blue and white Nanking porcelain, much in demand overseas, the many coloured pieces - known by their predominant colour, like Famille verte and Famille noire - and the beautiful Coromandel folding screens, made of ebony and decorated with porcelain and coloured scenes of Chinese life. And during this reign, carved lacquer work and glass-making were revived. It is hardly surprising that “chinoiserie” became so madly popular in European high society during the late 17th century and much of the 18th.

xxxxxK'ang-hsi, one of the greatest emperors of the Ch’ing (or Manchu) dynasty, came to power in China in 1661 at the age of seven. As we have seen, after attacking the independent warlords in the south in 1673 and gaining full control of the empire, he embarked upon an ambitious campaign of conquest. By 1683 he had consolidated his power over the whole of China, including the island of Taiwan. 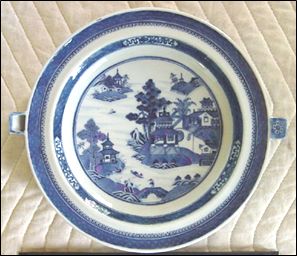 xxxxxBut K'ang-hsi was not merely an outstanding soldier. An educated man, he was anxious to learn from other cultures. In 1677 he had his own special study made in the Forbidden City where he could meet to discuss a variety of subjects with the scholars of his day. But it is perhaps in the field of arts and craft, and especially the production of Chinese porcelain, that his reign is best remembered. The pottery industry - so advanced for much of the Ming dynasty - had virtually come to a standstill earlier in the century, and in the 1670s Ching-te-chen in Kiangsi province, a major centre for the production of ceramics, was almost totally destroyed during a rebellion. However, inx1682 the emperor appointed the outstanding craftsman Ts'ang Ying-hsuan as the director of imperial pottery. Under his talented guidance the industry obtained a new lease of life, producing a quality of workmanship not seen for more than a century across a wide range of products. 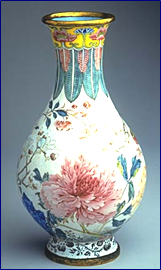 xxxxxThe crisp blue and white porcelain which was a major export during the Ch'ing dynasty, was first produced in the reign of K'ang-hsi, manufactured at the large government ceramics factory which was established at the old centre of Ching-te-chen. For the most part, each item was made in the shape and decoration of traditional Chinese design, and this had a marked influence on the development of European porcelain. It was shipped out in large quantities from the port of Nanking, and thus came to be known as Nanking porcelain. Many pieces - mostly plates and bowls - were also produced in a range of colours and came to be known by the predominant colour. Thus Famille verte had a distinctive green colouring in the floral decoration, whilst Sang-de-boeuf (oxblood) was a glossy red glaze, made from copper and often streaked with turquoise, and Famille noire had a rich black background. Some of these items were exported, but they were mainly made for the home market. Various vases produced during the reign of K’ang-hsi are illustrated below.

xxxxxPorcelain, together with shell and semi-precious stones, often decorated the Coromandel folding screens of this period, made of ebony and with panels of black lacquer on which were depicted scenes of Chinese life, and scenery in gold or other strong colours. They were made in the north and centre of China, but because they were shipped to Europe from the Coromandel Coast of India, this was the name by which they came to be known. And it was during the reign of K'ang-hsi that carved lacquer work was revived and glass-making introduced, made by a number of workshops set up in the precincts of the palace at Peking, or produced at handicraft centres outside the capital. It is hardly surprising that in European high society "chinoiserie" should become a fad, if not a craze, during the late 17th century and for much of the 18th.

xxxxxIncidentally, it was the Venetian traveller Marco Polo who gave porcelain its name. He brought back the first pieces to Europe in 1295 and, because it looked like sea-shells, he gave it the Italian name porcellana, meaning cowrie shell.