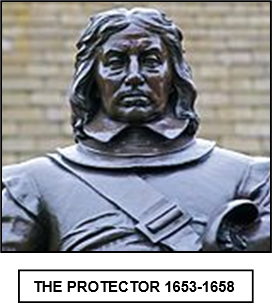 xxxxxThe execution of Charles I in January 1649 did not bring an end to the Civil War. It was a case of "the king is dead, long live the king". At Edinburgh in the following month the Prince of Wales was proclaimed Charles II in succession to his father, and large numbers in both Ireland and Scotland rose up in his support. General Fairfax had opposed the execution of the king and retired from office, so it was left to Oliver Cromwell to take on the royalists.

xxxxxIn Ireland he carried out his task with ruthless efficiency, crushing the rebellion with a terror campaign which has not been forgotten to this day. At the sieges of Drogheda and Wexford in 1649, for example, the civilian populations as well as the garrisons were put to the sword. He returned to England in 1650 and was obliged to march north to take on the Scots. He won a clear-cut victory at the Battle of Dunbar, and the following year brought the civil war to an end. He met another Scottish force, led by "Charles II" (crowned king at Scone in the January) and defeated it at the Battle of Worcester. Charles Stuart fled to the continent and the way was at last clear for the setting up of a Republican government or "Commonwealth", to include Ireland and Scotland. 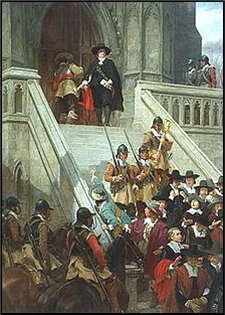 xxxxxThe "Rump" parliament (what little remained of the Long Parliament of 1640) had already abolished the monarchy and the House of Lords. Cromwell, the commander of the army and the natural leader of the new state, was now anxious to establish a settled form of democratic government, but found himself in constant disagreement with a parliament whose members were opposed to religious toleration and highly suspicious of his close links with the army. Totally disillusioned with the "Rump", he personally closed it down in April 1653 (illustrated), but soon found that a convention nominated later that year, known as the Barebone's Parliament (after one of its members named Praise-God Barebone) proved just as corrupt, obstructive, and suspicious.

xxxxxMaking no headway, and fully aware that there was much disquiet in the country over the execution of the king and the harsh social reforms being carried out by many of his fellow Puritans, Cromwell was obliged to fall back on the army. He divided the country up into eleven districts, each governed by a Major-General, and, for a while, virtually established a military dictatorship. The army leaders then drew up the first British constitution, an Instrument of Government which made him the Lord Protector (chief executive), helped and advised by a council of state and a one-house Parliament. Such measures brought no improvement. The parliament of 1654-55 was dismissed as uncooperative, and when, in 1657, another parliament offered Cromwell the crown by means of the Humble Petition and Advice, it was clear that republicanism was all but defunct. He refused the offer on the grounds that he was against hereditary rule, but he was also well aware that his generals were ready to revolt if he happened to accept!

xxxxxAs one would expect, the social reforms carried out during the Commonwealth period were puritanical in character. Churches were stripped of all decoration, everyone had to observe the Sabbath, theatres were closed - being regarded as centres of decadence - and any frivolity, such as dancing and outdoor games, was frowned upon. One parliament even managed to push through the abolition of Easter and Christmas! These reforms were often made in the name of Cromwell, but not always with his consent or knowledge. Indeed, he himself was more liberally minded than is generally supposed. In 1649, for example, he had attacked the Levellers for their radical reforms and executed their leaders. He stood firmly for religious toleration, was fond of a drink, and was himself criticised for permitting mixed dancing at his daughter's wedding.

xxxxxNor was it all gloom and doom. During the Commonwealth the creation of the New Model Army - an impressive fighting force - gained prestige for England on the continent, and led to an alliance with France against Spain, whilst the navy was substantially increased under Admiral Robert Blake. As a result, the Dutch were defeated at sea, and Dunkirk on the continent and Jamaica in the West Indies became British possessions. The country's standing abroad had never been so high since the days of Elizabeth I. 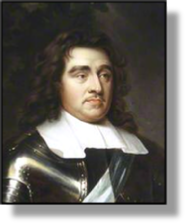 xxxxxWhen Oliver Cromwell died in 1658 all hope of continued reform died with him. Despite his avowed opposition to hereditary rule, he was succeeded by his son Richard. He was very unpopular - known contemptuously as "Tumbledown Dick" - and was clearly not up to the task which faced him. He abdicated in May 1659. Eventually, to avoid a rapid slide into anarchy, the commander-in-chief in Scotland, General George Monck (illustrated) led his army into England and, on reaching London, recalled the Long Parliament. In May 1660, after some months of confusion, the Long Parliament - now restored to its original size under military protection - invited the exiled Charles II to take the throne. The attempt at a republican form of government, which had stumbled along from one crisis to another for more than a decade, was at an end. The monarchy had been restored.

xxxxxThe English Revolution, as it is sometimes called, was a protest and - it must be remembered - a valid one, against the oppressive rule of an absolute monarch. That it failed to come up with an alternative system of government which was acceptable to all is not wholly surprising. The king's execution, whatever the rights and wrongs of it, affected the people far deeper than expected. The comfort of tradition and continuity was lost. This, together with the presence of a powerful army hovering behind the Protector's "throne", and the conflicting interests and aims of various groups within successive parliaments, made the creation of a republican government extremely difficult if not impossible. It was a case of better the devil you know than the devil you don't know. But though this experiment at reform was a failure, it was not without consequence in the long term. It added considerable weight to the English tradition that government, whatever its form, should be somehow limited. Therein lay its value.

xxxxxIncidentally, the flag illustrated below is the personal standard of Cromwell during his time as Lord Protector, 1653-1658.