xxxxxAs we have seen, the young Michael Romanov became Tsar of Russia in 1613 (J1). Over the next ten years, peace was achieved by giving land to Sweden and Poland and keeping out of the Thirty Years’ War, and some progress was made in internal reform. His son Alexis, coming to power in 1645, regained some of the lost land, but his edict of 1649, giving the landed nobles even greater powers over their serfs, stored up future trouble. Many peasants fled to the Cossack settlements and, from here, joined in a powerful but unsuccessful revolt against the government in 1670, led by Stenka Razin. Fyodor III, who succeeded Alexis in 1676, took little part in government, and it was left to his half-brother, Peter the Great, to bring about the birth of modern Russia after assuming power in 1689 (W3). 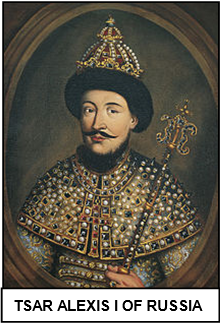 xxxxxAs we have seen, sixteen-year-old Michael Romanov, the new Tsar and founder of the Romanov dynasty, came reluctantly to the throne in 1613 (J1). His country was in ruins and occupied in part by Swedish and Polish forces. For a time, too, he was dominated by his parents. But the forces of the coalition which had brought him to power were anxious to restore some semblance of order, and in this they were aided by an experienced body of civil servants who had survived the “Time of Troubles”. Over the next ten years land was given to Sweden and Poland as the price of peace, the country steered clear of any involvement in the Thirty Years War, and some reconstruction of agriculture and local government took place. But the social problems besetting the country - and notably the worsening plight of the peasants - received scant if any attention.

xxxxxWith the coming to power of his son, Alexis, in 1645, some success was achieved in regaining lost territory. In 1654 the Cossacks of the Ukraine, overthrowing their Polish masters, placed themselves under the protection of the Tsar. In the ensuing war with Poland - conducted in two campaigns - Russia regained Smolensk, Kiev, and the land east of the Dnieper River. But the re-incorporation of the Ukraine, a district of the patriarchate of Constantinople, brought about a serious schism in the Russian Orthodox Church. 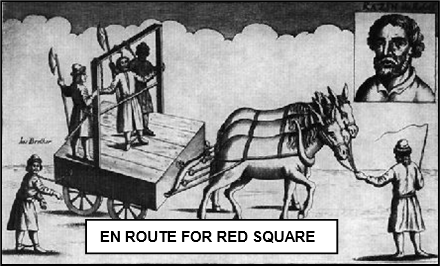 xxxxxFurthermore, a law code adopted in 1649 giving the landed nobility much greater power over their serfs, and reducing the privileges of the Cossacks, stored up trouble for the future. Many serfs fled to the Cossack settlements situated along the lower stretches of the Volga, Dnieper and Don Rivers. Here they joined up with some 7,000 outlaw Cossacks, led by a charismatic leader named Stenka Razin, and in 1670 came out in rebellion. Fearing that the uprising might spread, the Tsar sent in his highly trained army and, despite the size of the uprising - some 20,000 strong - the rebels were quickly overwhelmed. Razin was captured, taken to Moscow and, after four days of torture, was savagely executed in Red Square.

xxxxxFyodor III, who succeeded Alexis in 1676, took very little part in the affairs of government. He was a sickly child and died at the age of 20. He was well educated, however, and was much in favour of introducing Western culture into Russia. But, as we shall see (1689 W3), it was his half-brother Peter I (the future Peter the Great) who was to open a window onto the West and bring about the birth of modern Russia.